Installing 11.1.2.3 – Can an Essbase and Planning consultant possibly do it?

Why, yes, he can, much to his (and maybe everyone else’s) amazement.

Those of you who have followed this blog (ah, Mum, you do still follow the blog, right?) know that I am, uh, infrastructurally challenged.  Yes, I am able to, somehow, make a living at this stuff implementing solutions based on Essbase, Planning, ODI, and various and sundry SQL hacks.  But installing this stuff?  Alas, not so much.  (Alas because it is quite remunerative and even more than that, when I get to a client that has the EPM Environment From Hell, I could help make it better.)

So it is with not a small amount of trepidation that I approached the 11.1.2.3 install this week.  Yes, yes, I know, it came out in April, and world+dog already has it installed, but I’ve been on projects, went to New Zealand/Australia to help run ODTUG’s SP conferences, had this wee event known as Kscope13 come up (remember that I am on the ODTUG BoD, am responsible for the technical side of the labs – also note that I did not do the Amazon installs, had a total of six presentations – some before Kscope, others were private, participated on two panels, I could go on but you get the idea), and have in general been running around like a one armed paperhanger.

But all of that, thankfully, has passed, and I am now able to put my mind to an install. My last go round with 11.1.2.0 was on my old Dell Latitude e6400 (I bought the maxxed out 64 bit, 8 GB RAM model) was not exactly a success.  I’ve turned to the Amazon Cloud in the meantime and it has been great.  But all along I’ve wondered – if I had a Big Enough Box, could I have gotten away with doing this all in a VM?  During my Latitude days, I worked with Dan Pressman to prove that we could convert John Booth’s 11.1.2.2 AMI to VMWare (and someone converted that to Oracle’s Virtual Box) but of course 8 GB of RAM is simply not adequate.

However, I splurged earlier this year on a Dell Precision M4700 laptop (lest you get jealous, remember that while I have the privilege of picking whatever gear I want, I also have the responsibility of paying for it – ah, the carefree life of an independent consultant) and it has 32 GB of RAM and a superfast (if a bit small) SSD drive.  What would happen if I installed everything from scratch?  Could I handle it?  Good question.


What took the longest

Believe it or not, the bit of the install that took longer than anything else was the install and patching of Windows 2008 R2 Enterprise, SQL Server 2008 R2, and Office 2010 (32 bit).  Yes, these are all legitimate licenses (remember that bit above about making decisions and then paying for them) that I get through Microsoft’s Action Pak program for MS Partners.  DVD ROMs simply aren’t all that fast (I never did go for those .iso images although I have to wonder given how long it took to install).

Downloading, now that I no longer have the slowest “broadband” connection in the world (DSL was fast in 1999, not so much when the world changes round you), EPM 11.1.2.3 was pretty fast.  I was able to pull down much more than I needed for my EPM install (I downloaded just about everything off edelivery in 11.1.2.3) in the space of an afternoon while the MS world was installing.  So far, so good.

I’m not going to cover how to do this because you can:

Okay, true story that is tangentially related to this post:  When I was living in Europe, one of my buddies (I’ve known him since 8th grade) came over for a visit to the land of Cheese and Beer and then continued on to Finland.  He was (and is) a huge Sibelius fan and knowing not one single word of Finnish when he got out of passport control he went to the taxi rank and said to the driver two words:  “Sibelius, Finlandia”.  The driver took him here.  How cool is it that a classical composer is such a national hero that everyone knows his name.  And that one of his best known pieces (Finlandia) is an act of rebellion against an imperialist power?  Try that in the US of A with “Copland, Rodeo” even if most of us (I am making a bit of a leap here) would at least recognize the music.

Clawing my way back to relevancy

So what to say about the install?  I used SQL Server instead of Oracle (sorry, but it just easier for me although I have a feeling that I will regret it when I get round to installing all the components of ODI – I know when I created an Amazon AMI with ODI and SQL Server Express it was a total stinker) so I differ somewhat from John G’ and Henri’s path.

The other thing I didn’t do was read the documentation.  Do that, won’t you?  Here’s the bit that I missed on MS SQL Server (see, I told you I was going to be sorry I didn’t use Oracle) database creation requirements.

If you, like me, don’t end up doing this, the following SQL queries will: 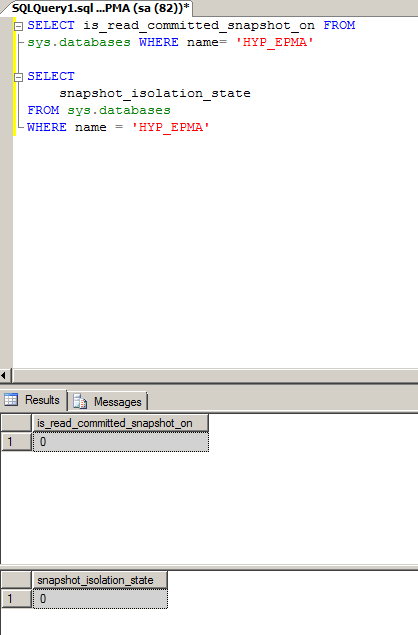 I reached out to John Booth (John, believe it or not, I really constrain myself from asking you question as I would otherwise have to set up a retainer account with you.  And I hear you are a bit busy.  Thanks again.) on this one and he pointed out that this was noted on a Network54 thread.

Submit this query and all should (hopefully) be well: 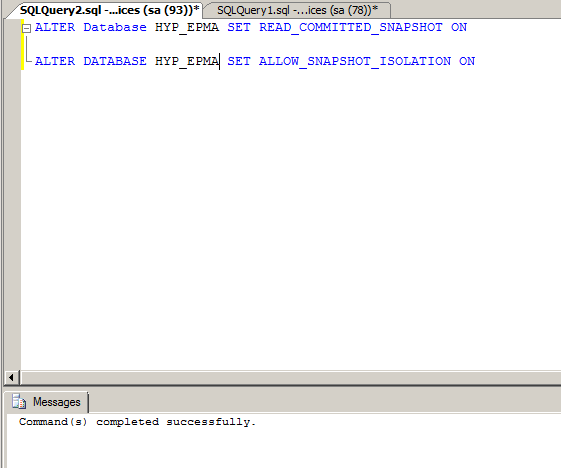 Fwiw, I had issues with getting the snapshot isolation to take – it ran and ran and ran and never seemed to finish.  I killed it and then went looking and found this thread on StackOverflow re figuring out if this would ever finish or not.  I ended up stopping all of the EPM services and reissuing the command and all was good.

I should note that while the formal documentation states to set this for all EPM SQL Server databases I found that I only needed to do it for EPMA.

Here’s what it all looks like when things are working: 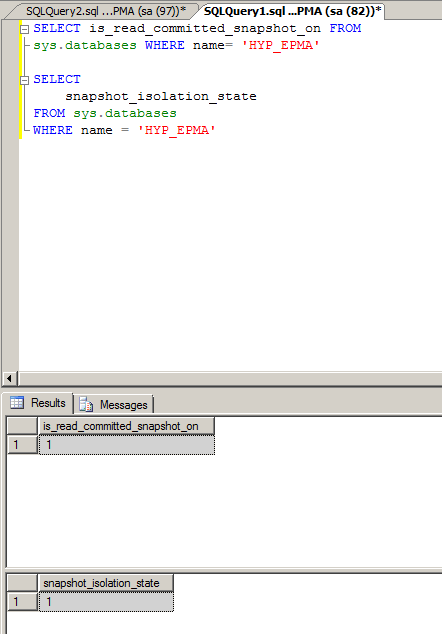 It’s running.  And quite nicely, too. 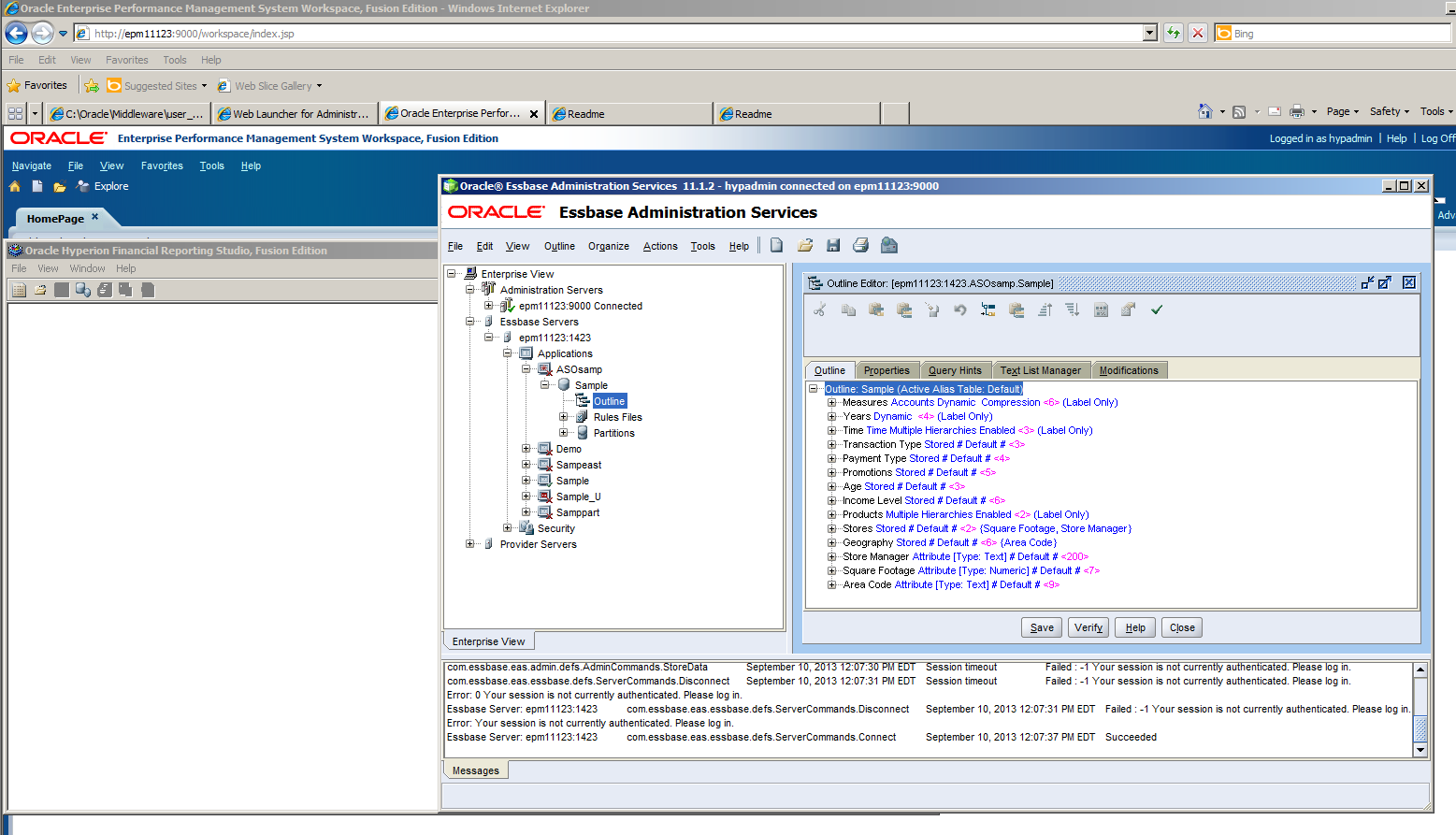 I don’t know if the above is blind luck (not all that likely), adequate resources (quite a bit more likely), or a reflection on Oracle’s part to make at least compact deployments easier to do (winner, winner, chicken dinner).  Thanks, Oracle, for making this a wee bit simpler.  I just want to use the tools, not be an infrastructure expert.  Infrastructure just isn’t my particular cup of tea and now I don't need to drink it.

I have to get all of ODI installed and apply the patches I noted.  After that…start working on those Kscope14 sessions.  All on my laptop.  Forgive me Amazon, because I will not be dumping the Cloud but honestly, AWS can be a bit expensive for a one man band.

Posted by Cameron Lackpour at 12:35 PM