Why I hate (and love) Business Rules, part 1

Just a quick note -- this is a two part (hence the title) post as the content was just too long. Trust me, the next post is worth waiting around for.

The trouble with Business Rules
Hyperion Business Rules (HBR) really has a number of petty annoyances for those of us forced to use its editor:

1) It loses its connection with Planning/Essbase on a whim.

2) The editor converts all of those lovely tabs you used to delimit your FIX and IF statements in the calc script editor (any editor, actually) and turns them into spaces, which then makes everything hard to read. Ah, but it's a tease, and HBR doesn't do that when you paste it, but when you save the rule.

3) It uses strange colors to identify keywords, and yes, they’re different than the calc script editor. And they’re unreadable. Yes, you can modify them, but still…

4) In HBR’s Bizarro World, it makes sense that while you can create a rule, you can’t run it until you’ve granted yourself the ability to do so, although you couldn’t grant yourself the ability to do so unless you could create it in the first place. Or can you? HBR has all sorts of byzantine roles that hardly anyone bothers with (has there ever been a real HBR Interactive User?) – in the real world (usually), you either write ‘em or run ‘em.

5) Oh, I forgot to mention the above whine was about the decent HBR editor – this is not the well intentioned (?), yet utterly misguided graphical business rule editor. I’m complaining about the “Enhanced Calc Script editor”. The other one…well, it’s been financially rewarding fixing the code generated from that beast. :)


Learning to love Business Rules
Despite all of the above whinging, HBR has one saving grace – it can read a Planning form Point of View (POV) through hidden Run Time Prompts (RTPs). And that means the calc script/business rule you wrote can be focused on the members in the POV. Everyone who does Planning knows this, right?

Actually, I lie, that isn’t really the reason I love business rules, although there’s a kernel of Business Rule Love there.

Boring stuff that you (probably) already know
You can’t build a house without setting a foundation. The below steps are what just about everyone does and is the basis for the cool stuff. Read it to refresh your memory, but the hack occurs in the next post – this delay is either going to intrigue or annoy you. I am hoping for the former, not the latter, but Que Sera, Sera.

Don’t pay too much attention to the logic of the calc, just follow the technique. The logic will be explained below.

Do pay attention to the below form. The two dimensions we will concentrate on are Entity and Segments which you can see in the form dropdown controls. 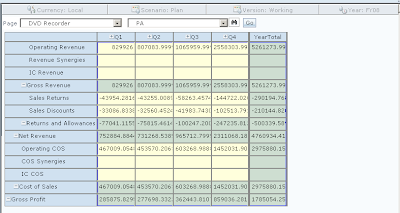 1) Write, test, and validate the calc script in a real editor (TextPad – my favorite, UltraEdit, EAS calc script editor or whatever) with POV replacement in mind, i.e., the Planning application has 100 products, you know that they will be in a dropdown control in the form POV, with a single product in your FIX. You’ll be replacing that hardcoded member name with a variable later on, but you’re trying to get the logic right first. 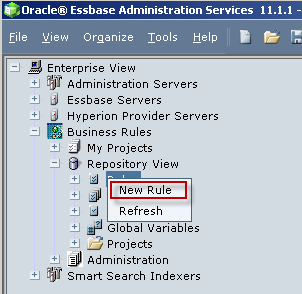 3) Select the Plan Type that this HBR references. NB – It will have to be a Planning data source as you are going to point this Business Rule against Planning sooner or later. 4) Before you do much of anything else, give yourself rights to Validate or Launch the rule. Otherwise you’ll just do all of the following steps and find out that you can’t run it. Which can be fixed at the end, but is still a pain. 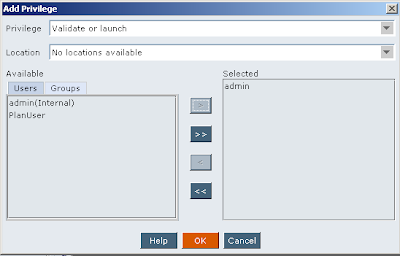 DOH! Caught you out, didn’t it? Does it to me every time.

5) First you assign the location, then you assign Validate or Launch rights. Why does it have to be this order? I think understanding this is to dream the impossible dream, but I digress. 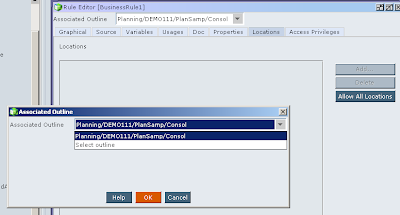 6) Make it an Enhanced Business Rule by clicking on the Source tab, and then typing a single letter (your choice, actually any character on the keyboard). Business Rules will ask if you want to take the daring step of abandoning your beloved graphical business rule. You do.

7) Paste your calc script into the HBR editor. I’ll explain in the next post (there’s that tease, again) why a plain old AGG(“Entity”, “Segments”) statement wasn’t used. 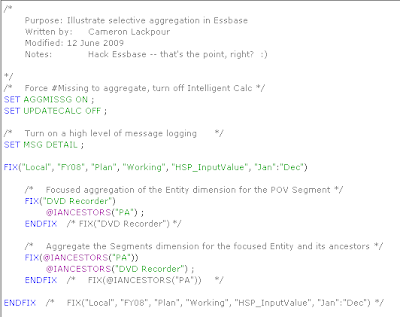 8) Create HBR variables to map your POV dimension members (Entity and Segments) if hardcoding (yes, sometimes that is perfectly acceptable) a member doesn’t make sense. Make them Run Time Prompts for a single member. Only varEntity is shown below -- it would be the same for varSegment. 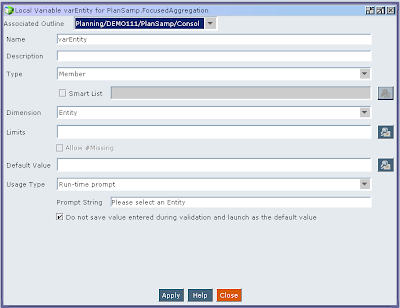 9) Flip back into the HBR source code, select the member name in whatever FIX statement makes sense (usually a single member; although more than one member can be selected that isn’t going to work with the single member coming off of a dimension in the POV) and right click to insert the variable. 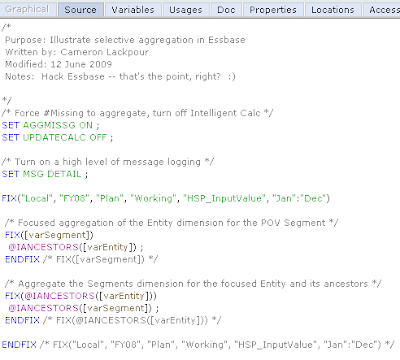 10) Save the HBR.
11) Validate it – you will be prompted for whatever dimensions have prompts. When you saved the variable/RTP, you specified that the sample value you enter is not the default, right? It is highly likely that what works for you as a default is nonsensical to almost everyone else in the Planning application. If the code doesn’t work, revise till it does (you knew this, too). I often run the HBR at this point to ensure I haven’t inadvertently introduced an error during the copy, paste, and HBR variable substitute process. 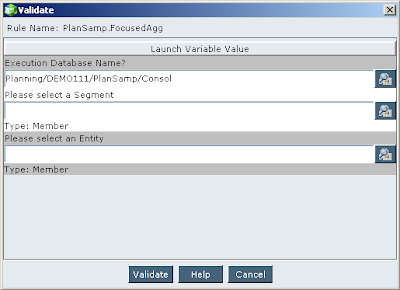 12) Edit the Planning form in question, go to the Business Rules tab, assign your freshly baked HBR over to the righthand pane, and then click on Properties. Select the “Run on Save,” “Use Members on Data Form,” and “Hide Prompt” checkboxes and then save the rule. This is the magic that moves RTPs across from the form POV to the business rule. Save that rule.

The above twelve steps (not substance abuse) are nothing special you say, every Planning developer does this. All you’ve seen is the simple substitution of hardcoded member names for Planning form POV member names. This is actually (for those of us who remember a time before the above was possible, pre Planning 4) pretty big stuff, although nothing new, for veteran System 9/11x developers.

Spot the Clever Bit?
Here’s a test for you – do you see the Essbase hack in the code above? All will be revealed in the next post.

Stringing you along
Hopefully I’ve piqued your interest; the second installment of this post will explain why I wrote the above HBR the way I did. As I wrote before, I decided to split this subject in two because the length was getting ridiculous.

Posted by Cameron Lackpour at 10:41 AM

Email ThisBlogThis!Share to TwitterShare to FacebookShare to Pinterest
Labels: Planning

Very exciting and look forward to your next post.

This is really useful articular for beginners. Could you kindly let me know where is those BR are stored in the server. RDMS? or as a text file?
If I want to take a BR Backup, what should I do?