Starting off with an apology

I have an old smart phone.  Like five years old.  And it’s breaking apart, piece by piece.  Droid2s are no longer thick on the ground, and once you see the fairly horrible pictures of a really nice hotel and convention center, you’ll understand what I mean.

I’m glad you asked as I am at one of the two ODTUG board of directors in-person meetings.  ODTUG does this twice a year – once in January and again before Kscope.

At the January meeting, we get to see for the first time (unless a director is on the conference location committee) where the upcoming Kscope will be held.

This place is, in a word, spectacular.  I don’t believe Kscope has ever been in such a nice place.

Here’s the lobby.  Take the almost-impressionist snapshot and multiple it’s awesomeness by 1000%. 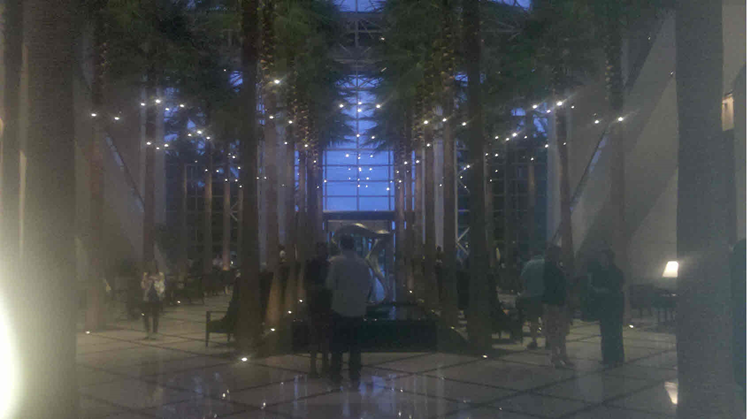 Mary Cassatt, eat your heart out.

Continuing the o-m-g what is theme, here’s the gym.  They like blue.  It is pretty amazing looking. 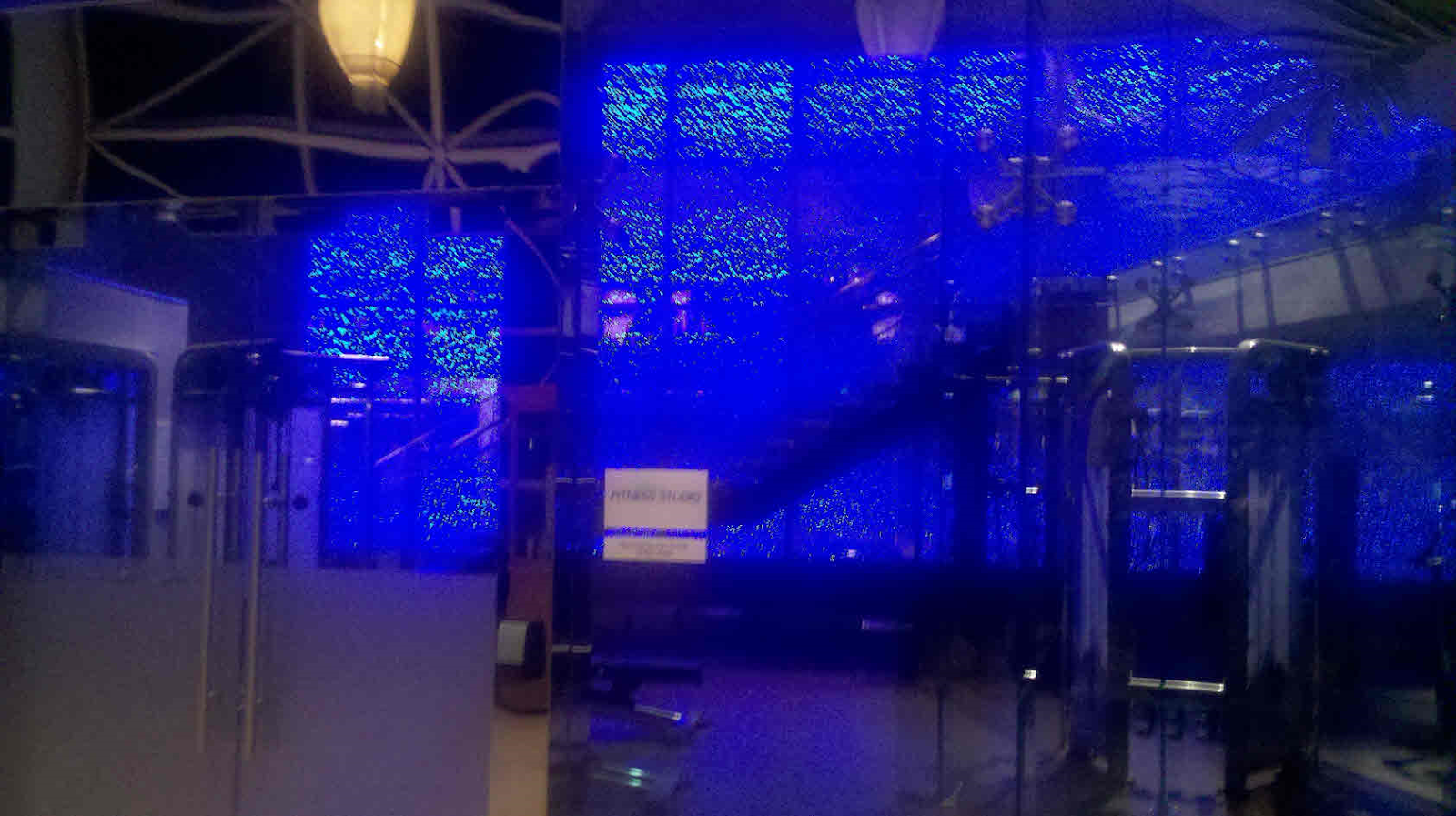 And lastly, something that is actually relevant to you, oh potential Kscope attendee – a breakout room.  They’re really nicely laid out.  Hopefully not so laid out that you stare at the walls or ceiling in an architecturally induced stupor of delight.  That’s what the speaker is supposed to do with his presentation. 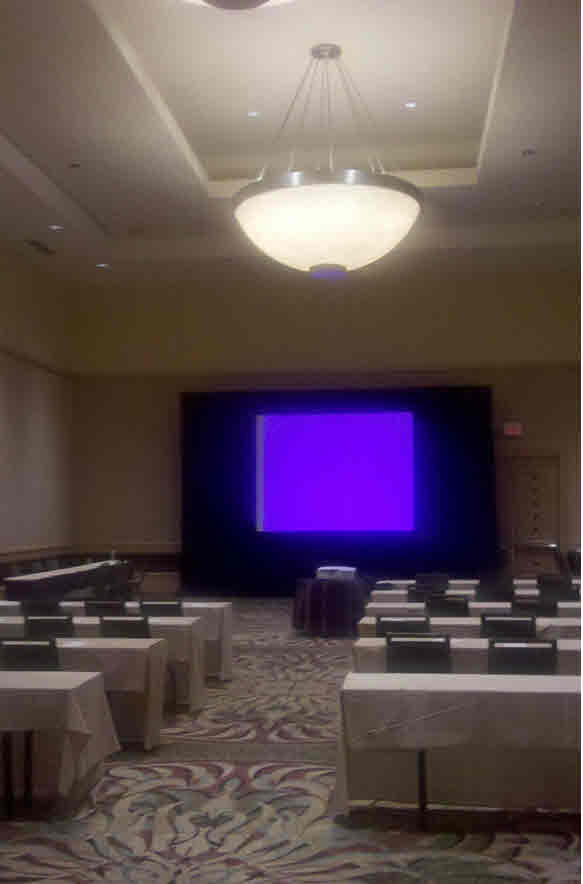 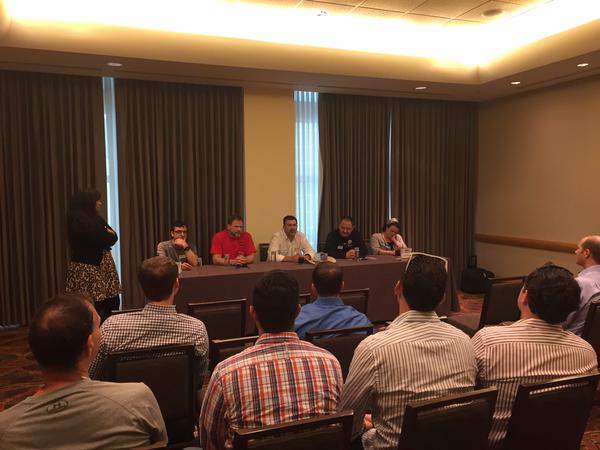 The South Florida meetup, led by Kris Callabro and Jessica Cordova, combined their second meetup with our kickoff to Kscope15.  Thank you all for coming.

From the left, you see Natalie Delemar as moderator, yr. obt. svt., Tim Tow, ODTUG President Monty Latiolas, Mike Riley, and Mia Urman.  David Schleis is not visible but he too moderated.

I think we answered some questions right.  Maybe.

The end and a question

It really is a spectacular resort and it will be a really spectacular conference.  I hope to see you there.

And now a question:  given that I own a smartphone old enough to be powered by coal and steam driven, what kind of phone would you recommend.  My only qualification is that it must be available for purchase in the States.

Be seeing you.
Posted by Cameron Lackpour at 12:19 PM 3 comments:

And what a year it was

It’s really all a bit amazing – you, Gentle Reader, saw fit to read this blog almost 80,000 times in 2014, and viewed over 100,000 pages.  I never, ever, ever thought when I started this blog way back in 2008 that I’d ever attract this many people.  Really, I had no idea what to expect other than I hoped someone would read it.  I guess there must be value here, somewhere, for these numbers.  Perhaps it’s me hitting the F5 key again and again and again or perhaps it’s every evil robot spambot trawling the site?  I prefer to think that it really does come down to you find this blog useful.  Thank you.

And now, thanks to the pretty awesome Google Analytics dashboard, let’s dissect what those numbers mean.

Jeepers creepers, where’d you get those peepers?

Good grief, there were a lot of you, and the numbers got higher through the year before they took their inevitable plunge over the Christmas holidays. 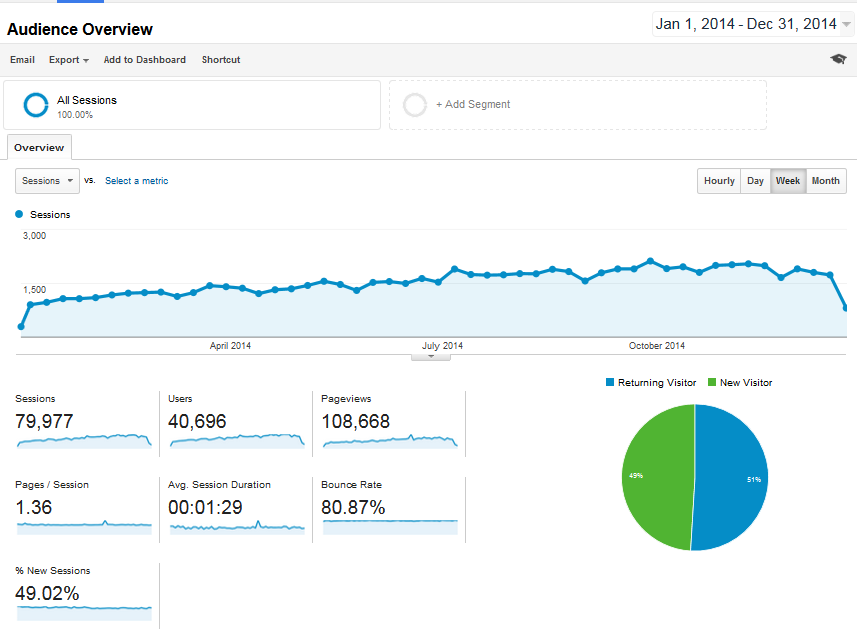 And look at the growth over last year – traffic basically doubled. 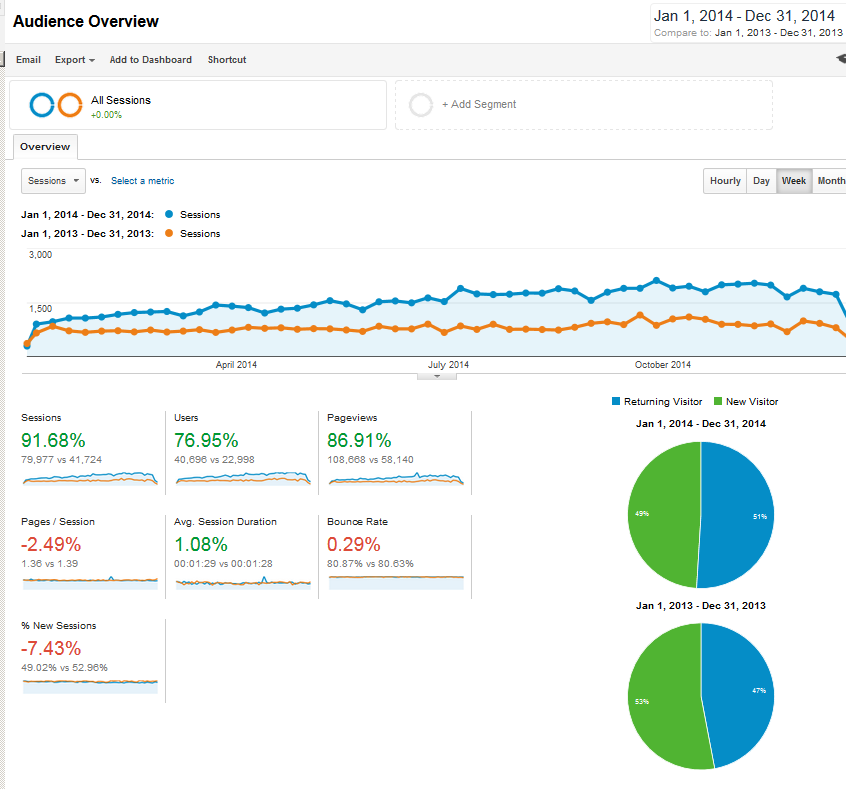 Where you came from in the US of A 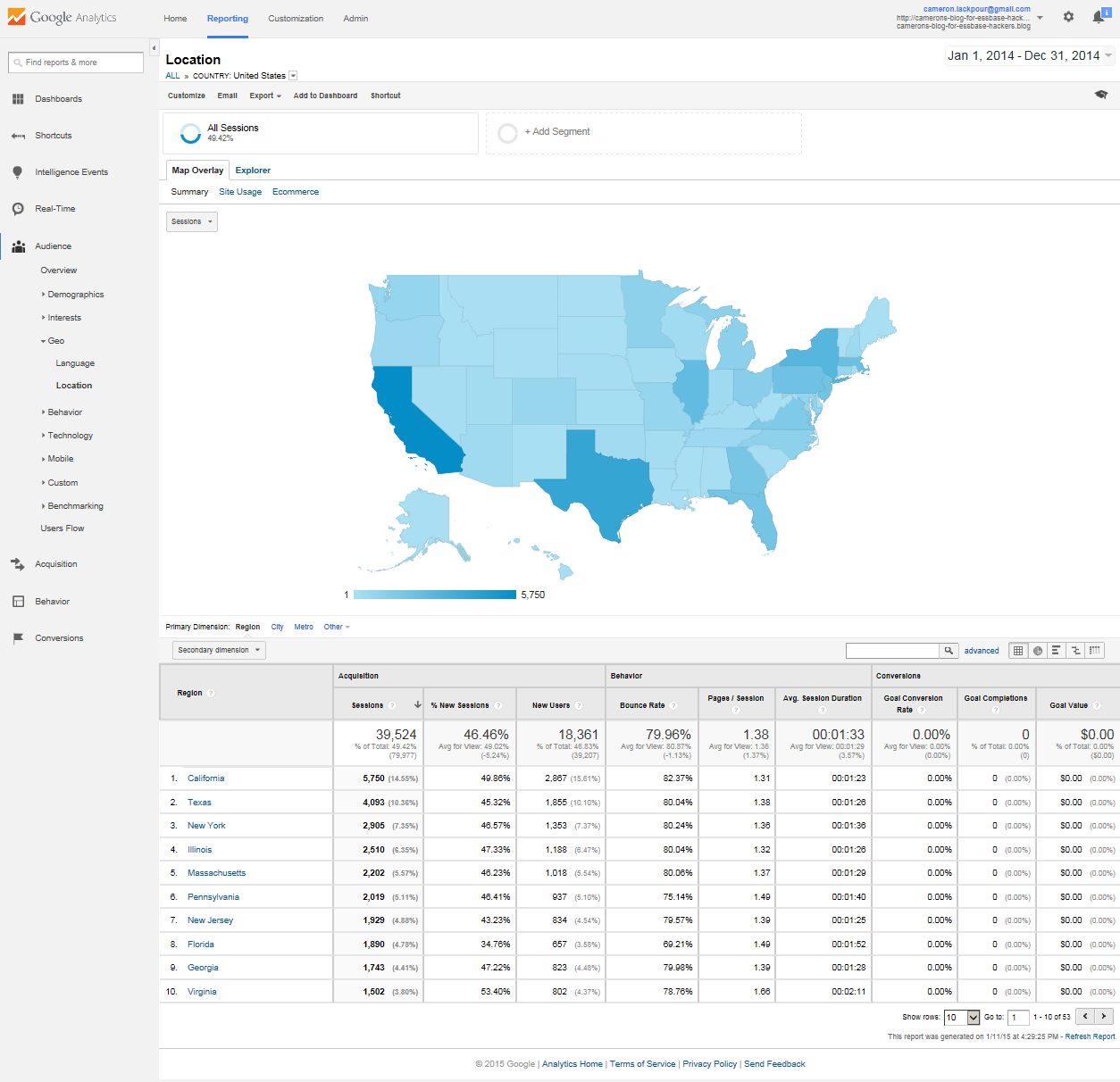 And where did you come from, last year? 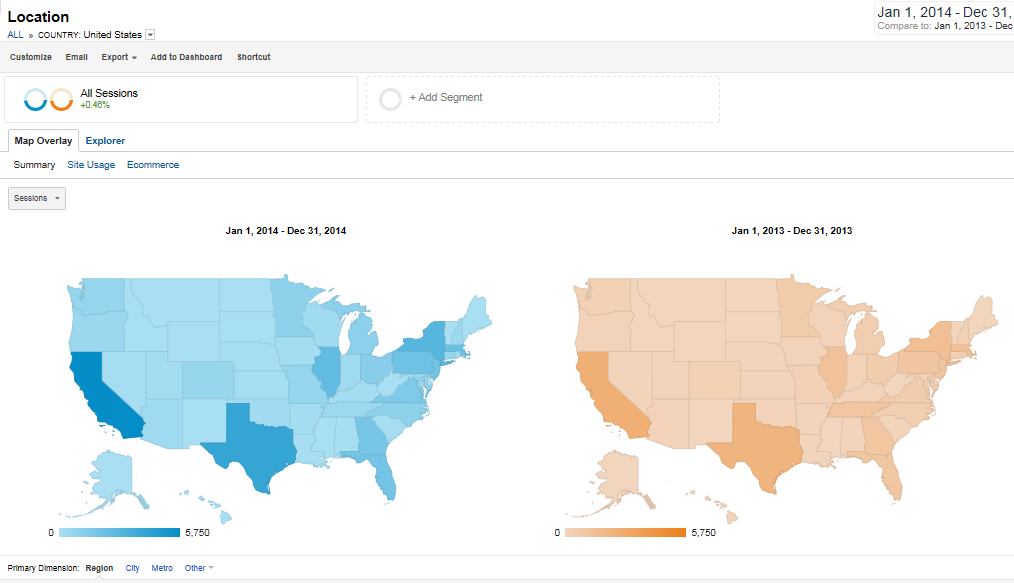 The distribution isn’t all that different – I am chuffed that I managed to hit every state.  I can’t believe there are many Essbase hackers in Wyoming, but there must be at least one.

California continues to be the number one state for readers.  Given its size, population, and tech industry focus, this is hardly surprising.

The skew towards Pensylvania is probably me writing this blog.  Okay, maybe not all of it, but a good deal of it.

Is there really more to the world than the States?  Yes.

The US is the largest site but that’s not a huge surprise given our population.  The distribution doesn’t change much.  I still have the goal of reaching Greenland if it’s broken out separately from Denmark.

The largest percentage change is Germany, followed by India, and then Brazil.  That’s three continents.  I should note that I don’t speak German, any of the dialects and languages of India, or Portuguese.

I have been to Germany on holiday, and when I was a young child I lived in South America (Guyana, and no, not as a member of a cult but when my father was on a USAID project to design and build bridges).

No, not the origin of man (way too controversial and besides you don’t read this blog to get my take on this), nor the origin of Cameron – ask my parents how that happened ‘cos I’m pretty sure it was either a stork or the cabbage patch, but where you come from.

If you discount service providers, the number one reader of this blog is Oracle.  Personally, I think they read it for a chuckle as they spot the mistakes in my wild surmises and guesses but perhaps they really do find value in it.  Or humor. 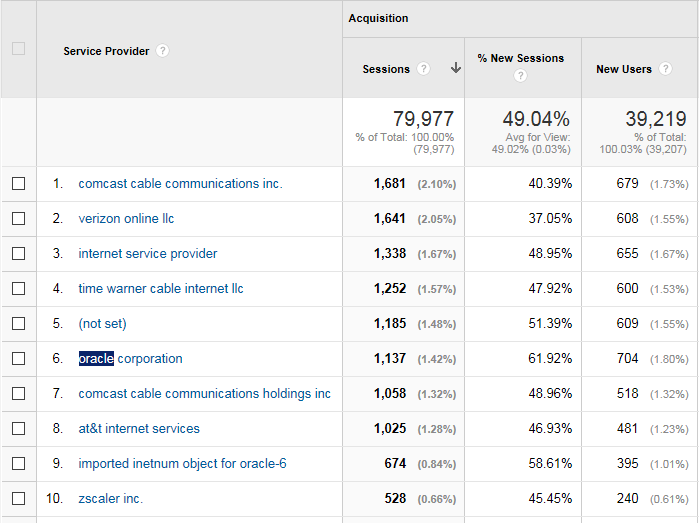 What is your lingua franca?

Although American is your first language, the second place winner is the British Empire (yes, I wanted to be a history professor, and yes, it would have been on labor in the British Empire, and yes, I find imperial history, particularly South Africa, Rhodesia, and South West Africa, “The Cape to Cairo”, Cecil Rhodes, Joe Chamberlin, Victoria Falls, Spion Kop (Boer War battleground, I’ve been there and it’s absolutely haunting), and any number of other places in southern Africa to be fascinating, and yes, I had a fellowship for a doctorate and ran away from it, and yes, I used the imperial names, and no, I have no idea why this interests me other than I had relatives there).  Whew, that’s way more than you wanted to know about me, isn’t it?  I expect Commonwealth countries to now boycott this blog. 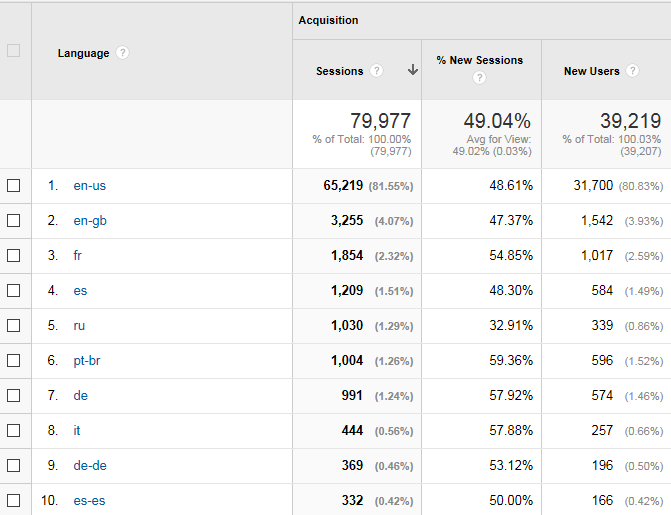 It looks like the iPad is the winner.  One of these days I have to spend more than 5 minutes with one.   It still seems like a crippleware version of a laptop.  I may be in the minority with this opinion. 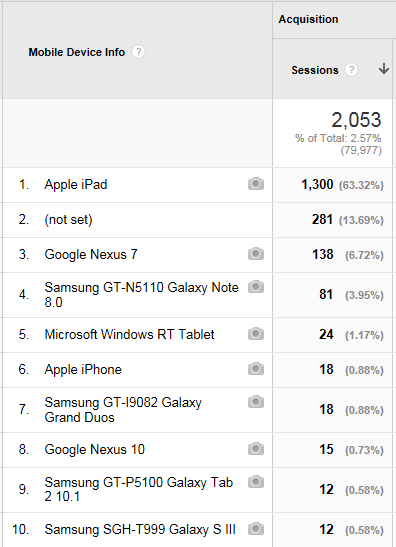 Alas and alack, my Very Favorite Browser in the Whole Wide World, Firefox, is in number three.  I just can’t warm up to Chrome and I only use IE when I absolutely have to. 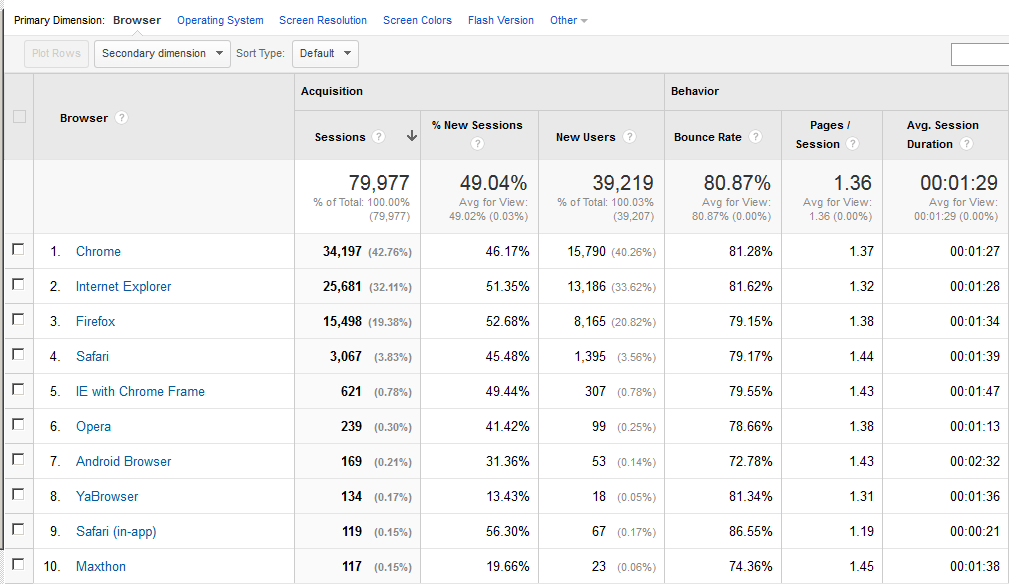 Celvin Kattookaran is right after the premier search engine.  Celvin is my younger brother from different parents that I love to torture, although I have a sneaking suspicion that he’s smarter and more talented than I.
I find it interesting that Edward Roske, my former employer, is still in the top ten given that it’s mostly a moribund site.  Edward, I’m looking at you – you could beat Google if you posted more often.  Personally, I miss your industry insider comments. 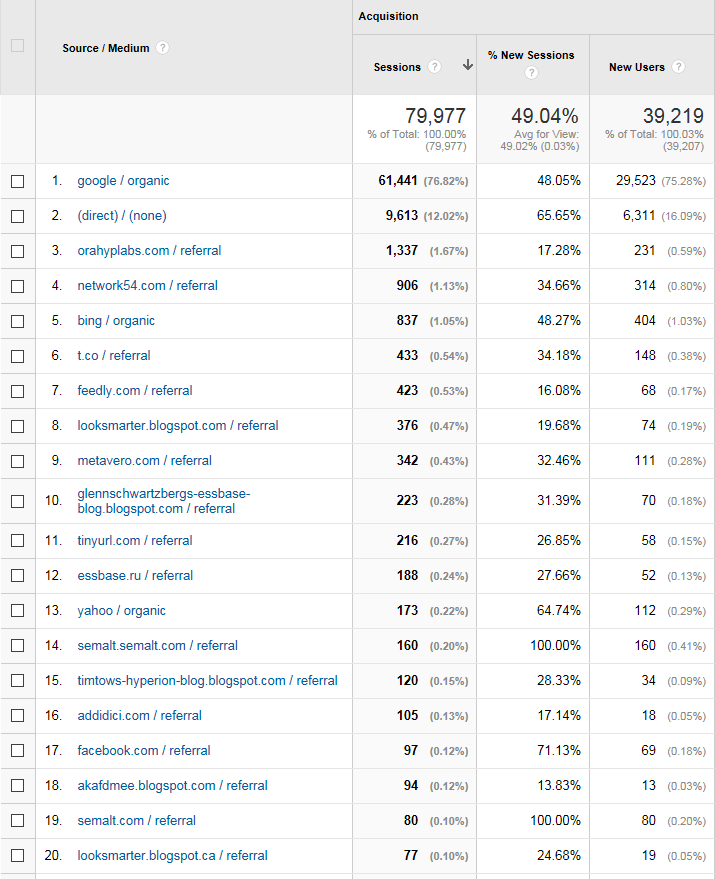 If I ever finish my Special Project That I Have Only Hinted About, I have posts on Calc Manager, yet another Stupid Load Rule rant, and block creation all queued up, at least in my mind.  Someday, and hopefully soon. 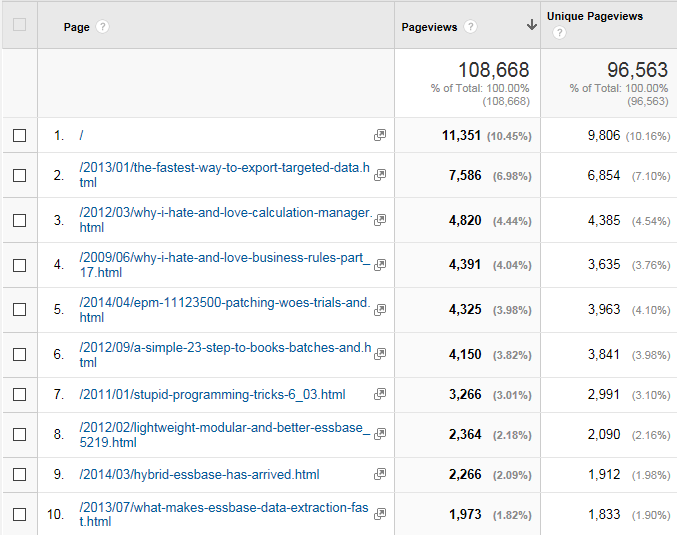 Would you believe that I broke the 200 mark for posts?  I find that amazing.  Perhaps it reflects my stubbornness, or my big fat mouth, or my desire to share my limited knowledge, or hubris, or maybe something else that I haven’t quite figured out.

What does matter, to me at least, is that you find this blog valuable as evinced by the numbers above.  I wouldn’t bother writing this all down if I didn’t think there was an audience.  And there, somewhat to my continuing surprise, is.

Thank you for putting up with my sometimes completely out there (c’mon, I’ll bet very, very, very few have ever heard the slogan “Cape to Cairo” and even less of you care) references and what is hopefully somewhat relevant Essbase and EPM content.

Thank you again for believing in me.  I’ll do my best in 2015 to keep the good stuff coming.

Be seeing you.
Posted by Cameron Lackpour at 7:54 AM 1 comment: