With profuse apologies to William Shakespeare

I come not to bury Glenn Schwartzberg, but to praise him,
The good that men do lives after and with them,
Glenn’s good  is visible in his deeds and actions,
So let it be with Glenn, the latest BI Oracle Ace Director!

Oracle ACE Directors are individuals who not only meet the requirements of an Oracle ACE (that is, a track record of advocacy), but who can also commit to future participation in an ongoing dialog between Oracle and the people who use Oracle Technology or Applications in the "real world." Most Oracle ACE Directors have also made extraordinary contributions of some kind, whether technical or community-oriented. As with Oracle ACEs, employees are not eligible.

And now my words

The above is just the beginning.  Read all you ever wanted to know about Oracle Ace Directors here.  Glenn has received a great honor but as it so often goes, much will be expected from him.  I have not the slightest shred of a doubt that he will excel in this role as he has in all others.
In case you haven’t noticed, I am excited and happy for Glenn and cannot think of anyone else who deserves it more.  The funny thing is he will likely want to hit me for writing all of this, but that’s just another aspect of his personality that I like so much – he is modest to a fault.
I’ve only known Glenn for just over two years, but they have been two very special years.

Glenn has given of himself tirelessly, cheerfully, and constantly to me, perfect strangers on the web, and to the Oracle EPM community in general.  We are lucky to have him.

He has been an inspiration to me and others and I count him amongst the handful of people in this business that I view as a role model.  Yes, Glenn, even when I go off the rails, I think to myself, “Good grief, that was dumb.  What would Glenn have done?”


The encomium is finished

This is a big deal, in case you haven’t figured it out.  As near as I can figure it, Glenn is now the fifth Oracle Ace Director in the EPM space (although the category is formally BI I draw a distinction between the BI and EPM worlds).
I’ve worked with all four of the other EPM Ace Directors (Eric Helmer, Tracy McMullen, Edward Roske, and Tim Tow) and they are all the most deeply talented and dedicated people I have ever met.  Glenn joins this august group as an equal.
Glenn, congratulations!
Now that’s out of the way, I have this question about Essbase…
Posted by Cameron Lackpour at 12:17 AM 2 comments:

Nor is it Henny Penny, Cocky Lockey, Ducky Lucky, Drakey Lakey, Turkey Lurkey, or Goosey Loosey and it definitely isn’t Foxy Loxy.  And no, overwork hasn’t landed me in the looney gooney bin yet.  But there is a metaphorical sky, and it’s falling right down on your head if you haven’t signed up for KScope 2011.


But you better hurry up

Why?  The Early Bird registration ends in just a few short days, at the end of the 25th of March, to be exact.  Miss that date and you are forgoing a lot of savings.


How much money can you save?

If you sign up after 10 June, you save:  zip, zero, zilch.  Bummer, but you did procrastinate, didn’t you?

You know (oh, if you’ve been reading my blog at all, you know) that KScope 2011 is the best conference for Oracle EPM content ever, so I will not reiterate the symposiums, panels, presentations, social events, exhibitors, and entertainment that make KScope 2011 the ne plus ultra of “Hyperion” conferences.

And, since you know that, I don’t doubt for one moment that you already have that credit card/P.O./check/fistful of dollars/bag full of sovereigns ready to plunk down on the barrelhead and save, save, save.  Here’s the link for registration.  Git goin’!

I can’t wait to see you there, with pockets a-flush with all the money you saved.  :)
Posted by Cameron Lackpour at 8:20 AM No comments:

Why you should be at KScope11

If you’ve read this blog at all, you’ve heard me blather on and on about how wonderful ODTUG Kaleidoscope is and why you should go.  Yes, I am not shy about my enthusiasm for the conference.

I’m not the only one who likes KScope11.  How about hearing what other people have to say about this most excellent of Oracle conferences?  ODTUG’s President and author of the ODTUG Blog, Mike Riley, has been interviewing some Oracle community luminaries (and an exception – no points if you can guess who the 5 watt bulb might be) about:

Who are these august few?  People just like you, that’s who.

Who do I mean?

Check out the responses to Mike’s questions.  The passion for Kscope11 runs deep and swift.  If you were on the fence re coming to KScope 2011, I’ll bet a read of one or two of the above ought to push you over onto the side of signing up right now, before the 25 March 2011 deadline for the Early Bird Registration.

I know I’ll see you there this year.  :)
Posted by Cameron Lackpour at 6:04 PM No comments:

The Warning Before the Introduction Along With An Advertisement

Is it bad to start off a blog post with a recommendation to not read that very same blog post?  Oh well, here goes:  If you use Calc Manager in Planning this post is a complete waste of time as you have already figured all of this out.

May I suggest spending your time doing something more constructive, like thinking about how you are going to go to the most awesome Oracle EPM conference in the whole wide world, i.e., ODTUG KScope, and see over 100 EPM and BI presentations, experience seven half day labs, attend multiple symposiums, party like a crazy EPM geek at Monday Night Madness, drink deeply of the Functional and Technical content, and oh yeah, visit http://www.kscope11.com/biepm for more information.  Hmm, that wasn’t very subtle.  I wonder who inspired me to write this?

For the rest of us, no one should spend the 30 minutes I did trying to figure this out.  The Happy Few still ought to contemplate the awesomeness that is ODTUG Kaleidoscope.

With that preamble out of the way, for those of you who know and love EAS (is there anyone who *loves* EAS?) also know that EAS' days are numbered.  How many that may be is up to Oracle product management, but it's time to at least think about moving on down the road.

With that thought (the wordplay is breathtaking) in mind, I was playing around (no life at work here but I know I'm not the only one) with Calculation Manager and was wondering -- where does security get assigned in Calc Manager for Planning?  How do I give the Planner John Q. Public access to a particular Business Rule?

For those of you who don't use EAS/traditional HBRs, security assigns look like: 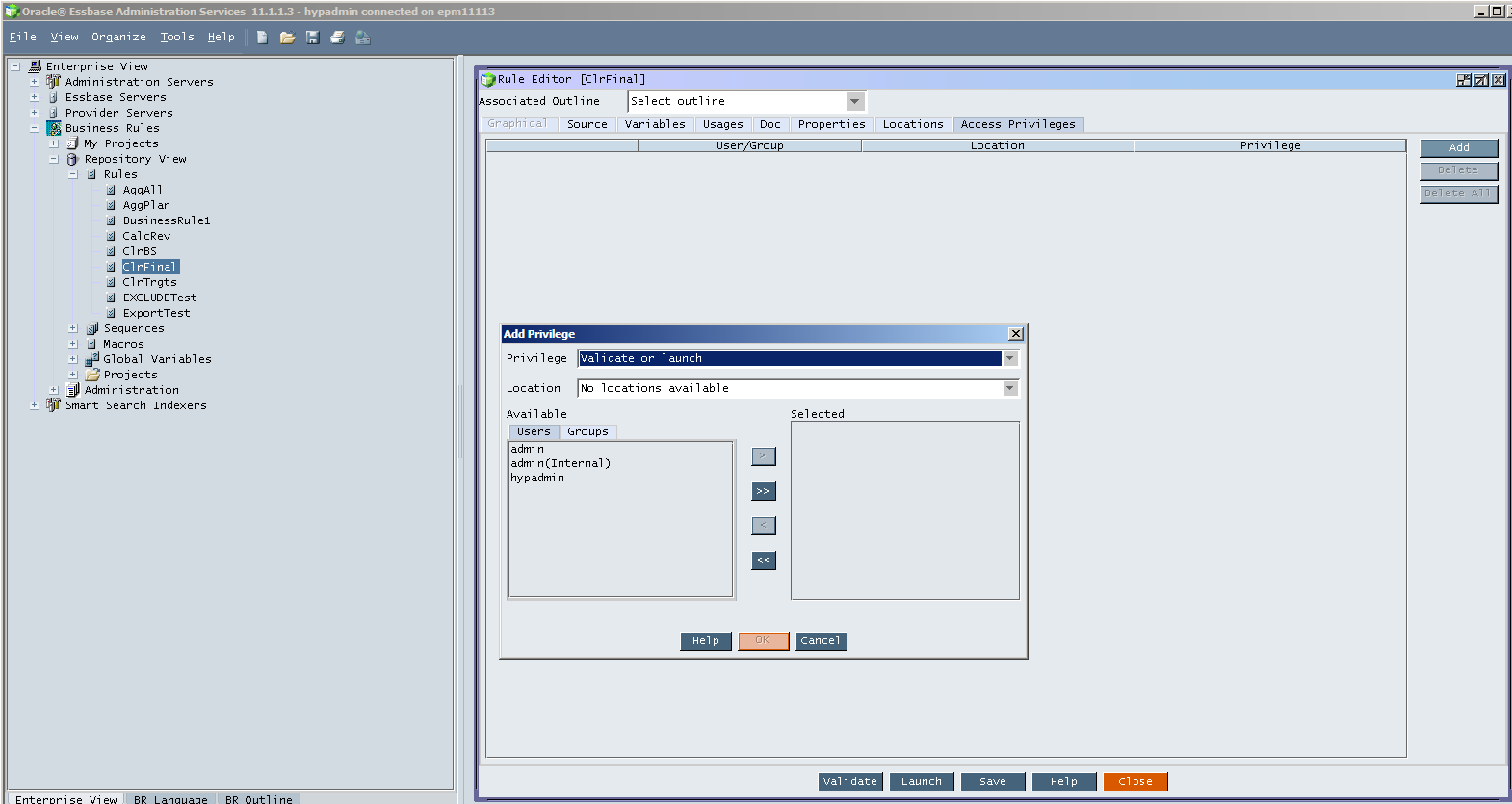 That's fine, but where on earth do you do it in Calc Manager?  It can't be in EAS because that's the whole (well one of the) point.  Business rules aren't in EAS, they're kind of, sort of part of Workspace.
Well, when I go into Workspace, and then go to Calc Manager, security is AWOL: 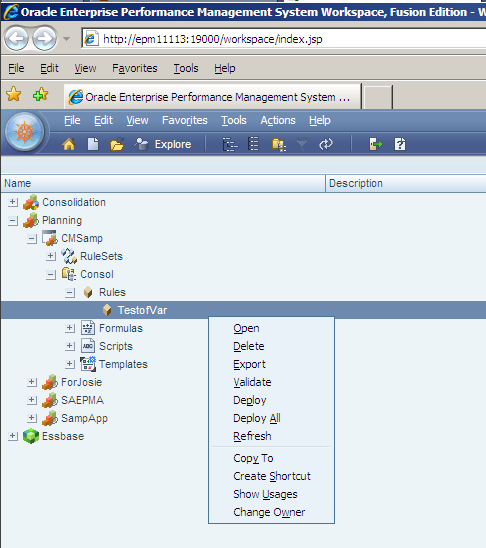 Don't get fooled by that Change Owner -- that does just what it says and has nothing to do with Planner John Q. Public being able to run a rule.

First, deploy the rule (you do not need to be using the Devil's Own, aka EPMA to do this as Calc Manager has its own deployment functionality) to the Planning application.

Secondly, go into Planning as an administrator and click on the Administration menu.  Do you see it? 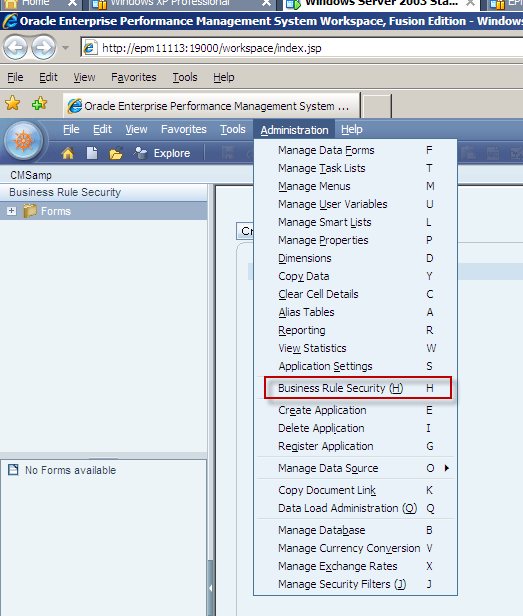 Is this menu choice in Planning in non-Calc Manager Planning apps?  Nope. 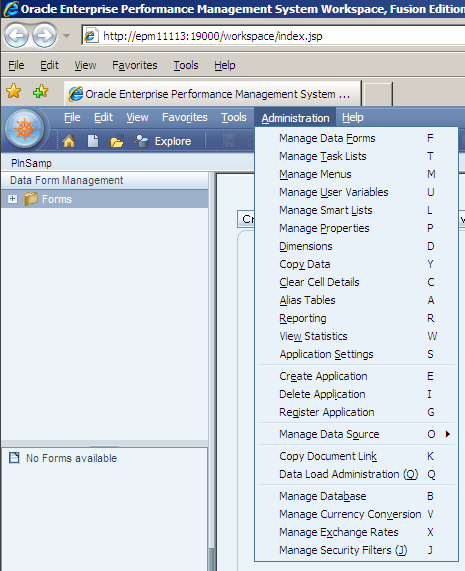 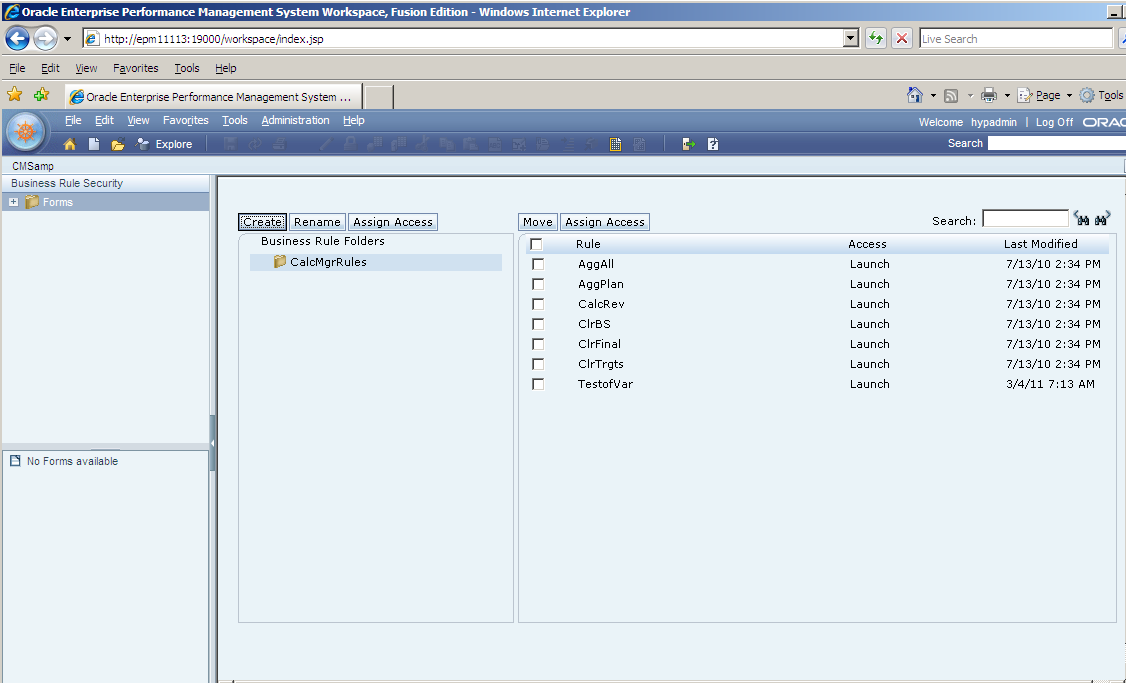 This is beginning to look familiar.  Select the business rule (maddeningly, just like forms, you cannot select multiple rules) and then click on the "Assign Access" button.

You will then see the standard access assign dialog box that you know and love for member security, forms, etc.

If you click on "Add Access" you will note that there are only two actions a Planner can make -- Launch or No Launch.  You don't see anything here because in Calc Manager, admins can't have access to a Calc Manager rule, just like they can't have access to a form -- they are above security.  This is at least consistent with the way Planning works for other objects and a big improvement over HBR’s crazy you-can-write-the-rule-but-not-launch-or-validate-it-till-you-give-yourself-rights-to-it model.

To my point about the oddness that was once known as Hyperion Allocations Manager, aka, HAM, this is different than EAS' HBR security, which can assign validation/launch and modify access.

So where is the provisioning for modifying the rule?  It's driven by Shared Services roles.

Phew, a lot of writing for a very simple thing.  But I've saved you 1/2 hour of your life, so you owe me.

P.S.  Extra credit, and again, if you use Calc Manager you already know this one -- did anyone catch the weird thing about the screenshot for assigning security access in Planning versus the HBRs available in Calc Manager?  This is a fairly well known bug as documented here:  http://forums.oracle.com/forums/thread.jspa?messageID=6685183&#6685183  No, I have not patched my VM to fix this.
Posted by Cameron Lackpour at 1:06 AM No comments: