Expanding your horizons while locking them down at the same time

I was recently on a Planning engagement where planners were eschewing Planning forms for the Awesomeness That Is Essbase.  Note that this is an on-premises site as a direct Essbase connection isn’t possible in PBCS.  Why is the connection type important?  ‘Cos the open and closed months that Planning defines through the Scenario dimension do not resolve to Essbase filters.  This is the advantage that Planning brings to the table with its Scenario dimension and just isn’t doable in Essbase.


Or so I thought.  Let’s have a look-see at how this works.

Since Planning’s Year Dot, the Scenario dimension has been where open and closed months by Year and Period are defined: 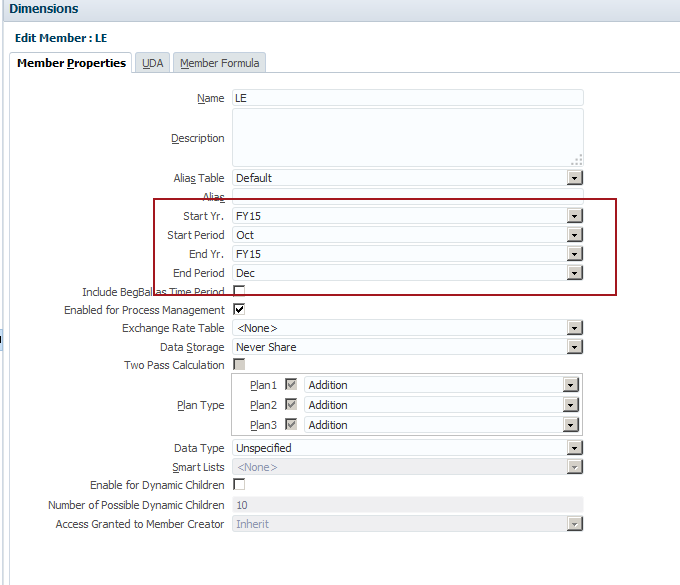 Planning then closes off the closed (naturally) months and leaves open the open (are you seeing a pattern here?) months:

All very nice and just what is wanted if one is in the last forecast of the year.


NB – Although this example only applies to the current year, I should note that Planning also applies this open/closed rule across years, i.e., if the start year/period is FY15/Oct thorough FY16/Dec, only the first nine months of FY15 are closed – October through December are open in FY15 and all 12 months are open in FY16.  More on this anon.


Again, all of this is well known and I am exercising my well-known penchant for stating the obvious.


But what happens to Period security (security isn’t exactly the right word, but Essbase filter security is an analogous concept) this is applied to Essbase?

Here’s what it looks like in Essbase with a non-administrator Planner.  Note that the months are wide open .  This is a real problem in Estimate or Forecast or whatever current year mix of Actual and Plan happens to be.  What happens when the data is sent to the closed-by-Planning but not-closed-by-Essbase months?


Put in numbers and fire away.  But watch out where you aim…

Do you see how all of 2015’s months are open for input?  If January through September is supposed to be closed, and the Essbase user can enter data into the closed months, planners could inadvertently change Actuals and in fact, given the vagaries and foibles of humans, almost certainly will.   This is generally accepted as a Bad Thing.

So what’s the solution?

I thought there was none, and told the client the same.  And then my BFF Jessica Cordova disabused me of that notion.  Imagine my chagrin (and, I’ll wager the delight on the part of you not-so-Gentle-Readers) when I tested it and she was right, right, right.  Bummer.  And awesome, all at the same time.


How did I get this wrong?  I thought that only Account, Scenario, Version, and Entity were the Must Have Security dimensions.  Why?

From the 9.3.1 Planning administrator’s guide, I read (and given how long I’ve been doing this, the 2.1 Planning admin guide or whatever it was called back then):
User-defined dimensions. Assign access permissions to members by selecting the dimension property Apply Security. If you omit setting Apply Security, all users can access the dimension's members. By default, the Account, Entity, Scenario, and Version dimensions are enabled for access permissions.


I’ve always understood that to mean (and hey, maybe I misunderstood this since 2001 but I don’t think so):  security on Account, Entity, Scenario, and Version are required; custom dimensions are the developer’s choice.


Note that Year and Period – both required dimensions – are not on that list, as in both dimensions only receive security through the Scenario dimension opening or closing a combination of both dimensions.


And then it changed.


Read what the 11.1.2.2 administrator guide has to say (emphasis added by yr. obt. svt.):
Dimensions, including user-defined dimensions. Assign access permissions to members by selecting the dimension property Apply Security. If you omit or clear the Apply Security setting, all users can access the dimension's members. By default, the Account, Entity, Scenario, Version, Year, Period, and Currency dimensions are enabled for access permissions.


Whaaaaat?  They changed it (and yeah, duh, obviously they did or Jessica wouldn’t have told me so) and, as far as I can tell, didn’t bother to put it anywhere other than these four little words.  And yes, I read the Read Me’s and the What’s New documents as well as checking in the Cumulative Feature Overview tool.  Nothing.


Good grief, this is like figuring out what a certain politician meant when he said, “It depends on what the meaning of the word 'is' is. If the--if he--if 'is' means is and never has been, that is not--that is one thing.”  Yup, I went there.  I only need to bring sex and religion to this blog and the world will explode upon me.  Can we just agree that lawyers parsing words are…lawyers?  And that maybe they work at Big Red?  Or is it more likely that I simply failed to RTFM and thus pay the price that the ignorant always pay.  Probably.  Definitely, even.  Such is life.


What did it look like?  Thanks to Robin Banks I’m able to bring you evidence in the now hard to find release of 11.1.2.1.  Security is nowhere to be seen, as it has been Since the Beginning.  Thanks, Robin old chum, for proving that I’m not insane, or at least not insane in this particular area. 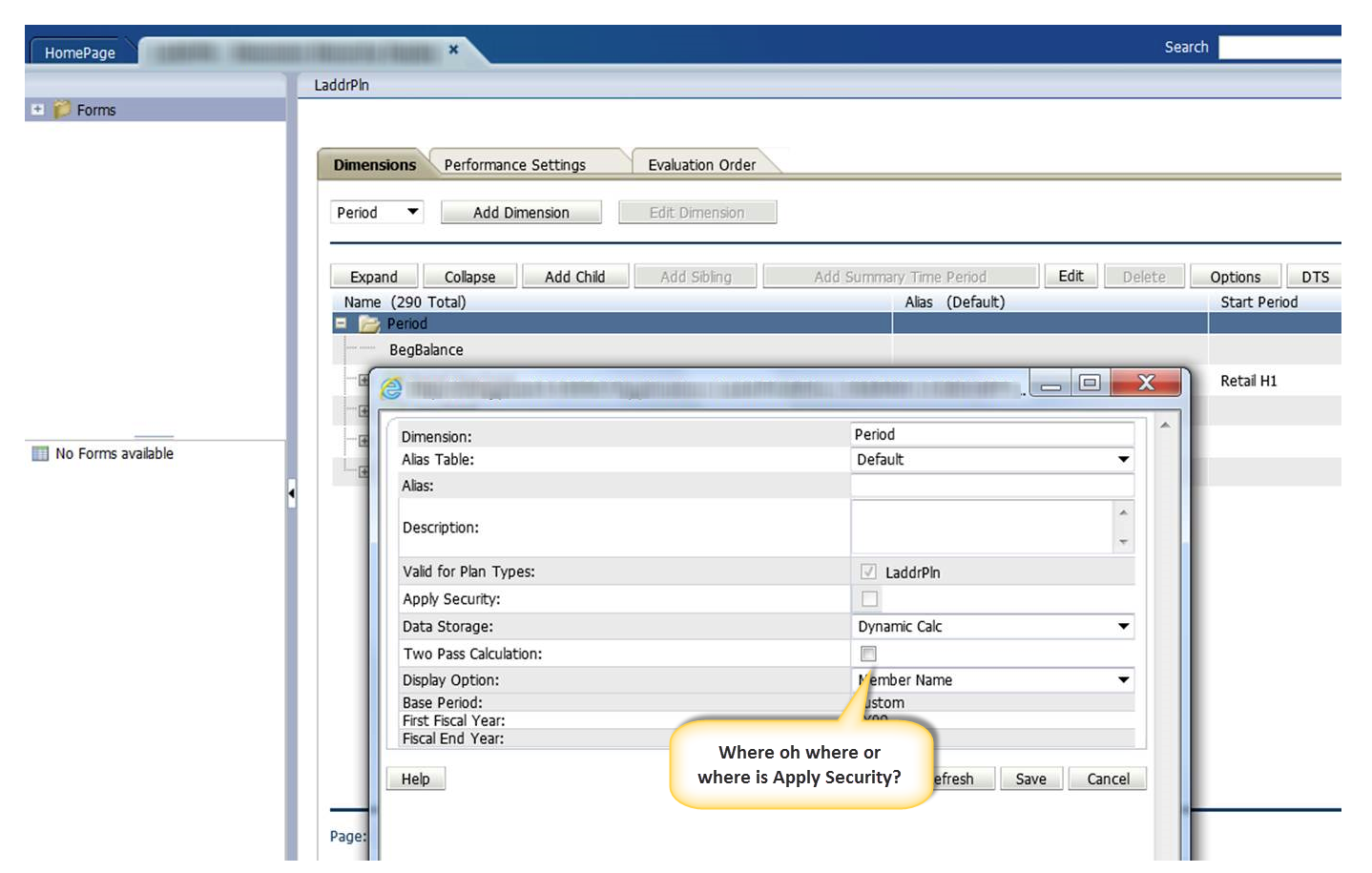 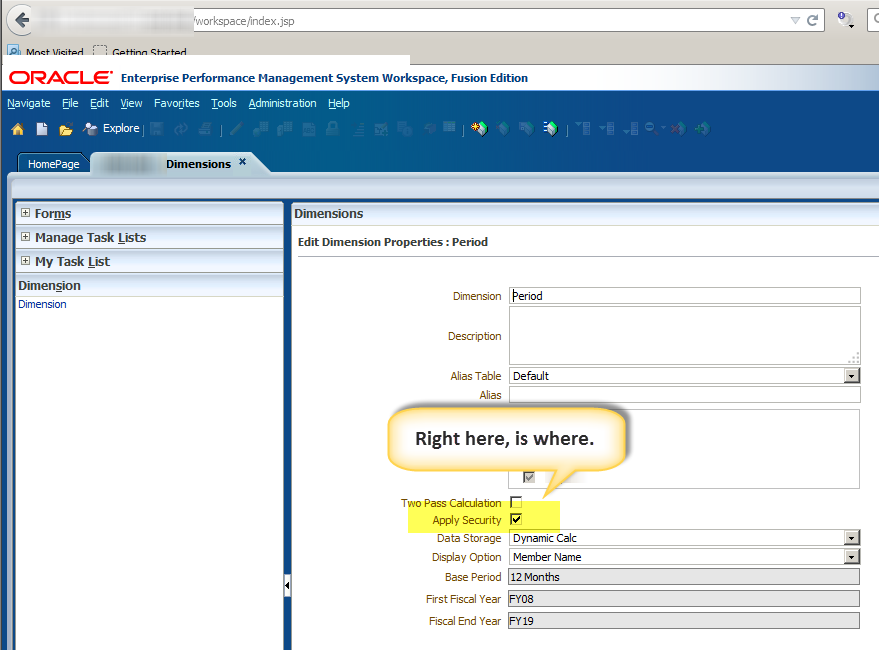 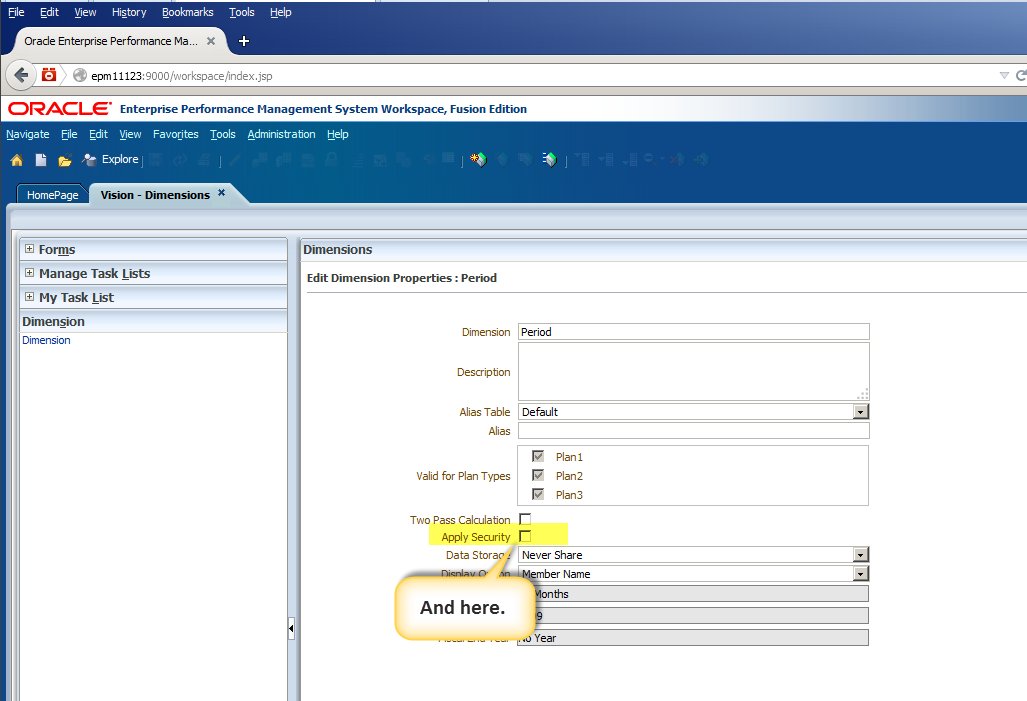 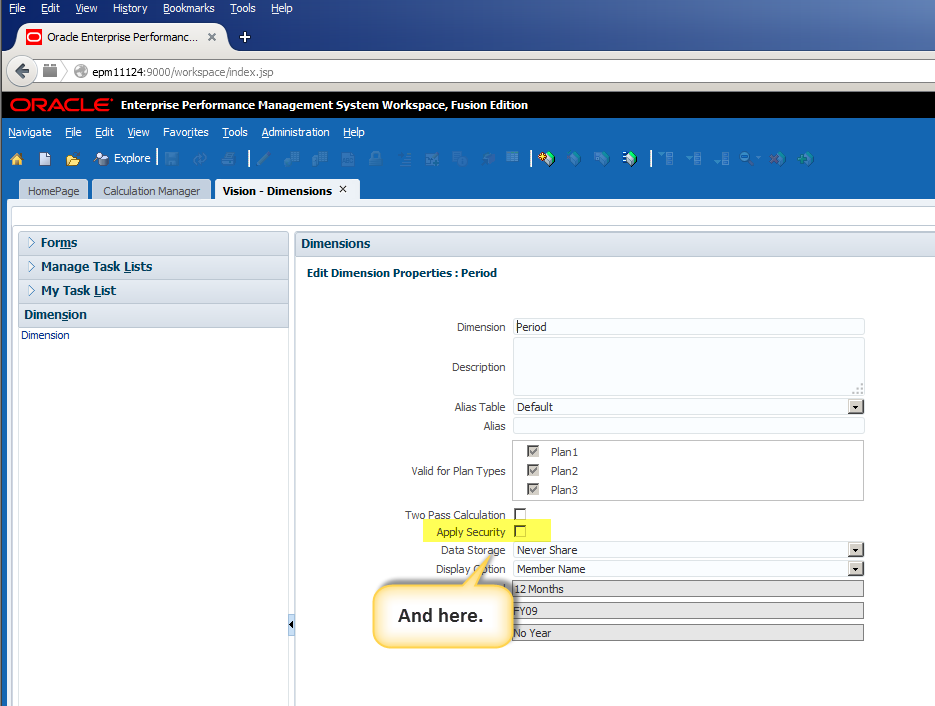 
I think we can safely agree it’s here to stay.

And now the useful bit

Once applied, security at the individual Period level is possible: 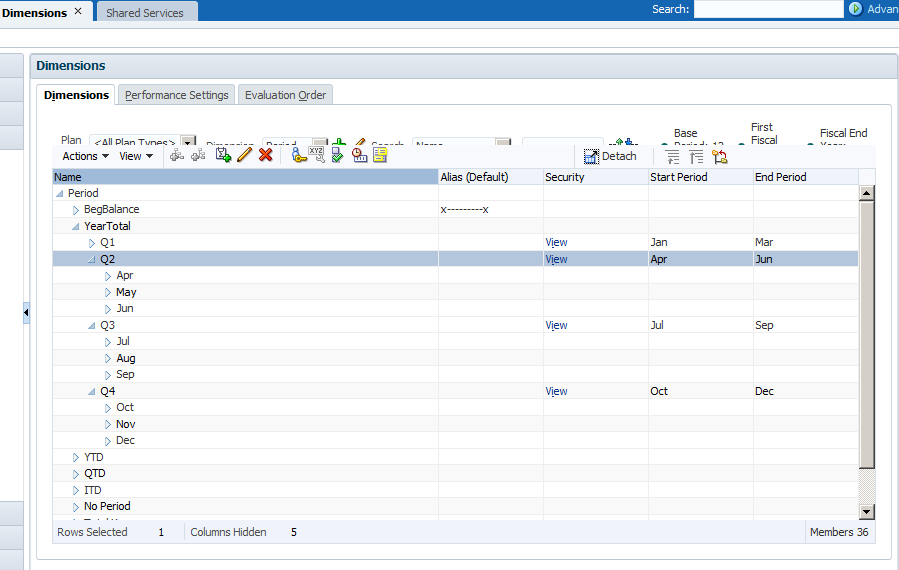 And that resolves to an Essbase filter for those Planners with Essbase Write Access provisioning.

Note that with the None filter line, Planning specifically writes read access to all of the filters (security is defined at the quarter level although it could have been done at the month) and then just write to the inclusive children of Q4.

And what does it do?

Let’s create a send sheet with the 12 months of the year and three years.  Can you guess where this is going? 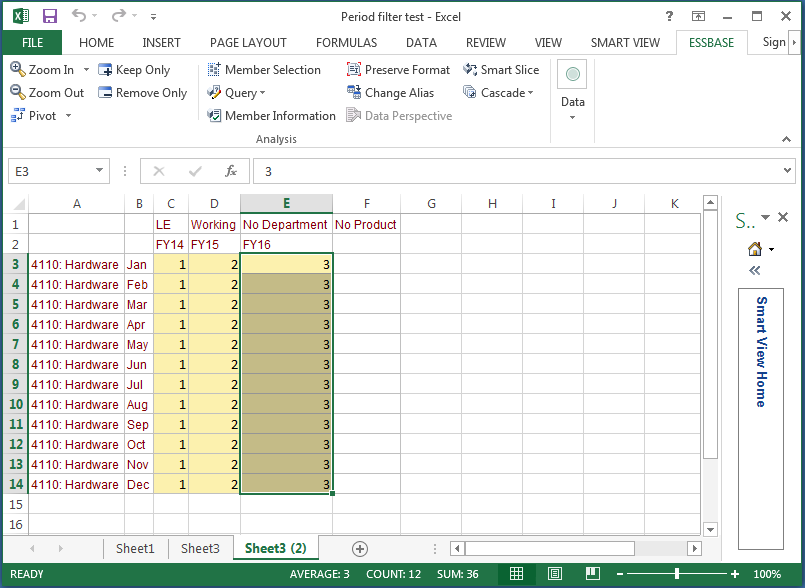 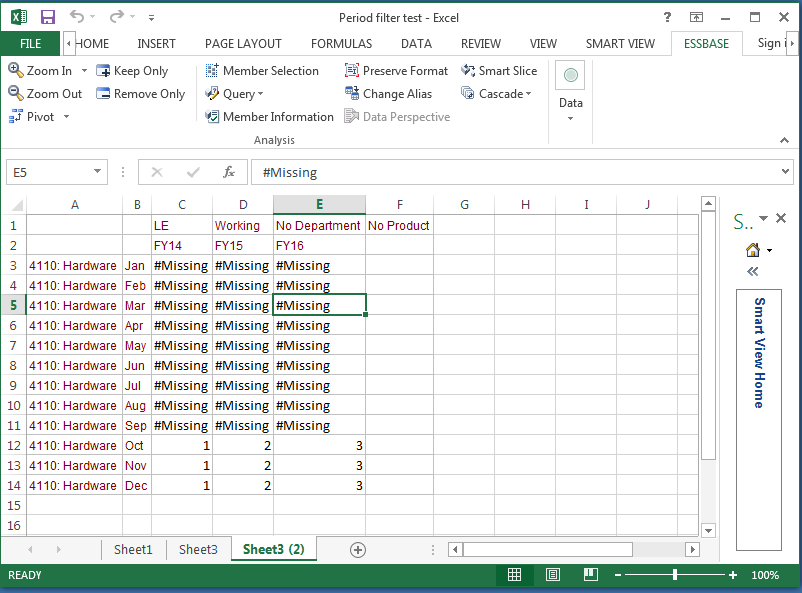 Can we do this to Year?

If one supposedly impossible security assignment is possible, why not another?  What about Year?  That’s yet another period that in theory cannot have direct member security assignments – it’s supposed to be handled by the Scenario dimension. 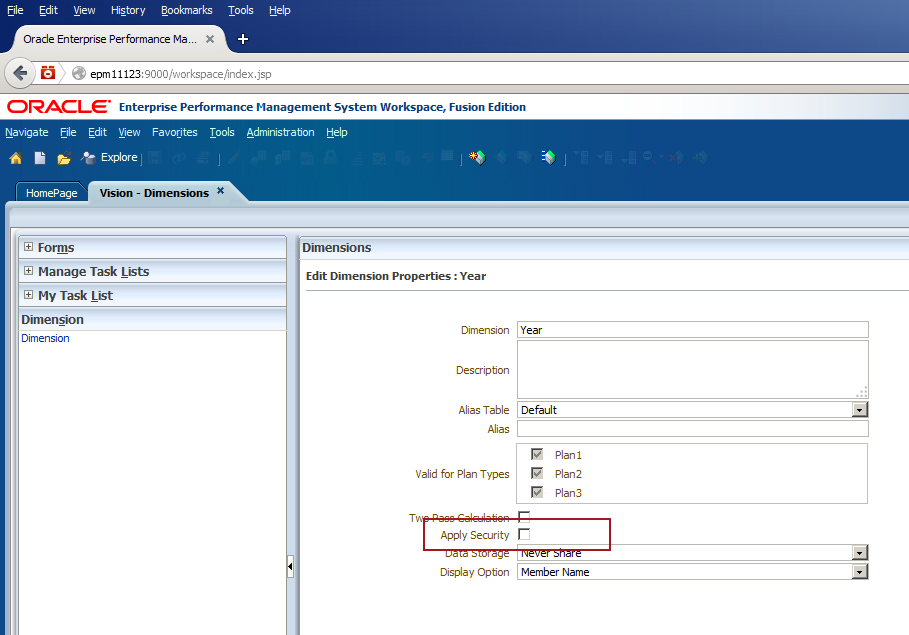 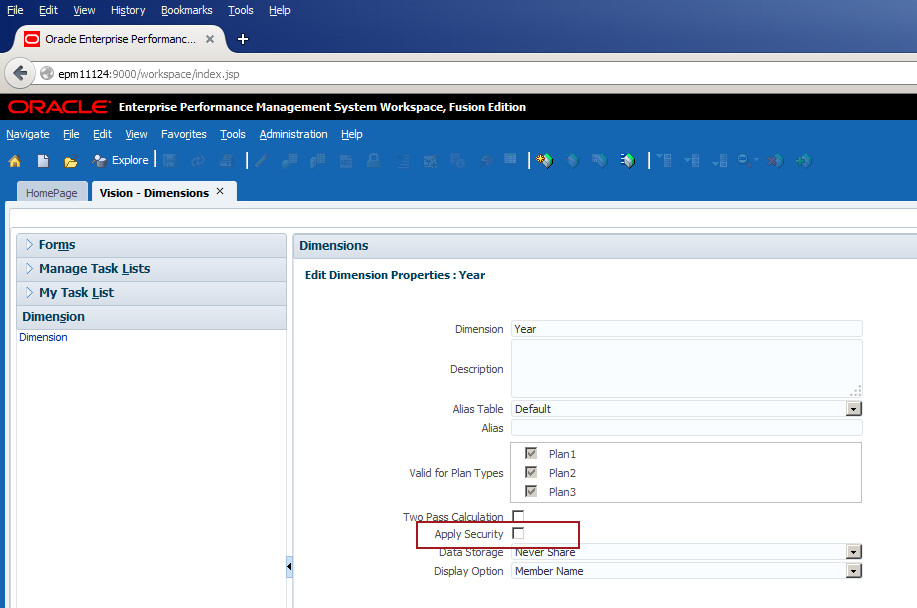 There are two choices in the Simplified Interface.  The “normal” approach is to use Navigator and then navigate (ahem) to the Dimensions editor as shown above.  There is another way, one that I don’t particularly understand givem the Dimension editor approach, that allows the same assignment.  Weird but there it is.  And yes, you’re welcome as I live for this sort of useless information. 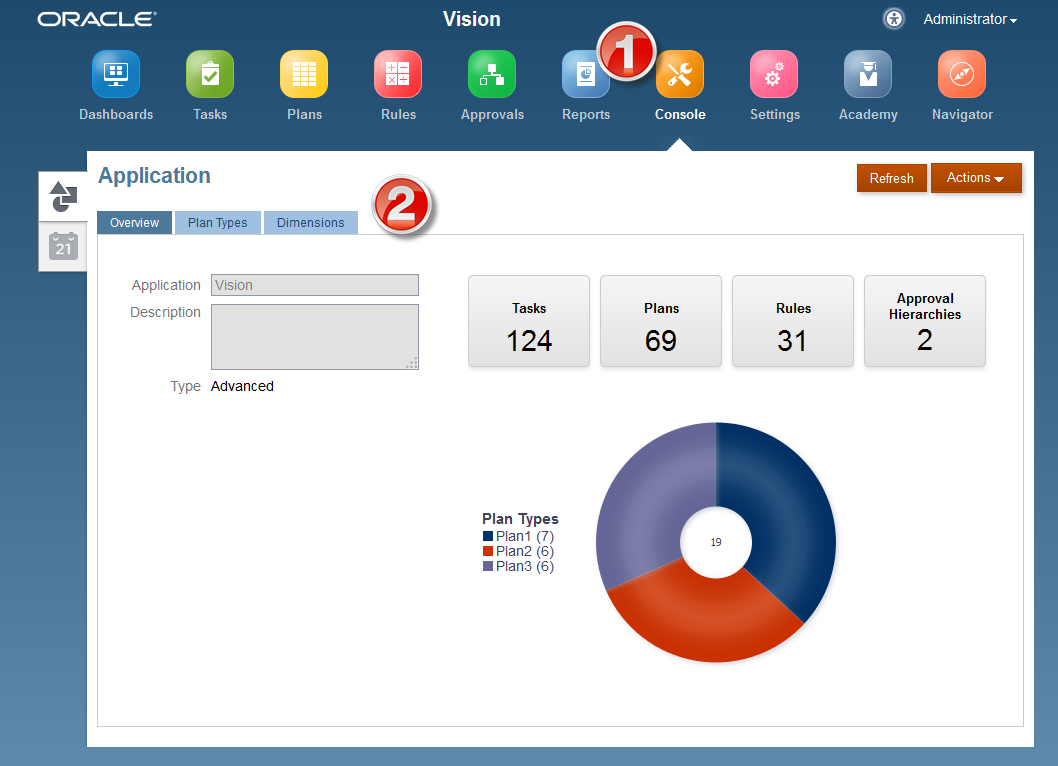 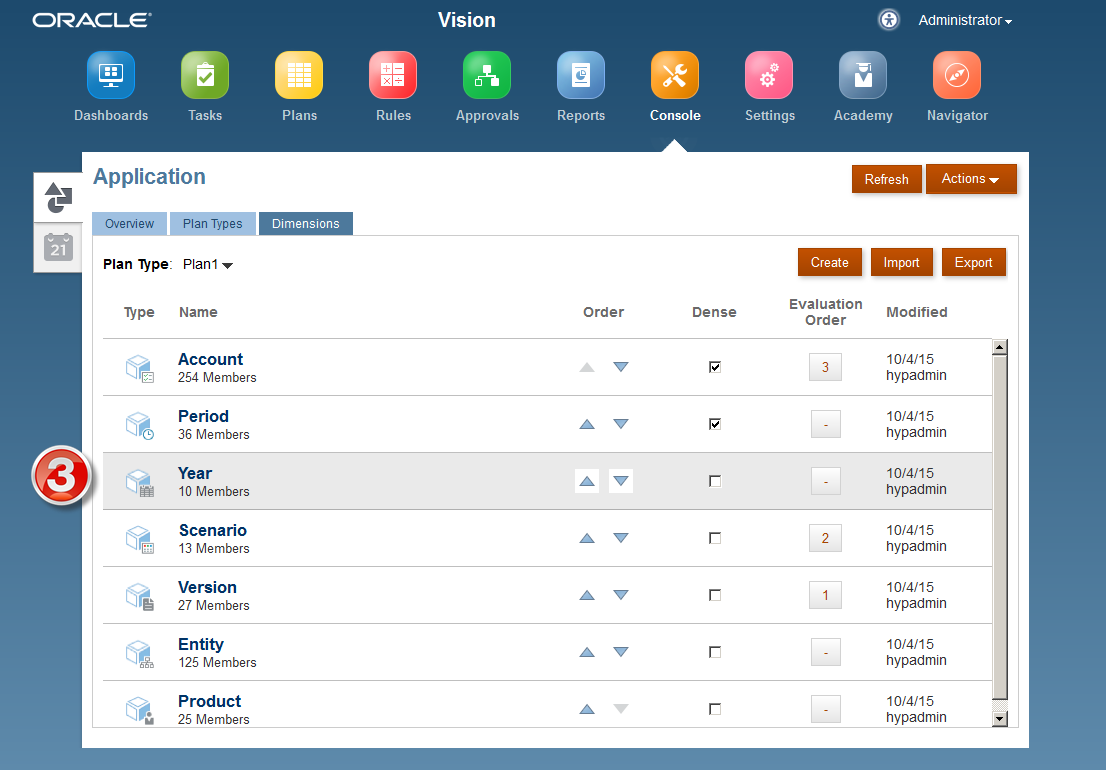 Wowsers, there it is.  Apply Security for Years.  Why can this be done two different ways?  I’m not sure.  Hopefully the digression has been fun. 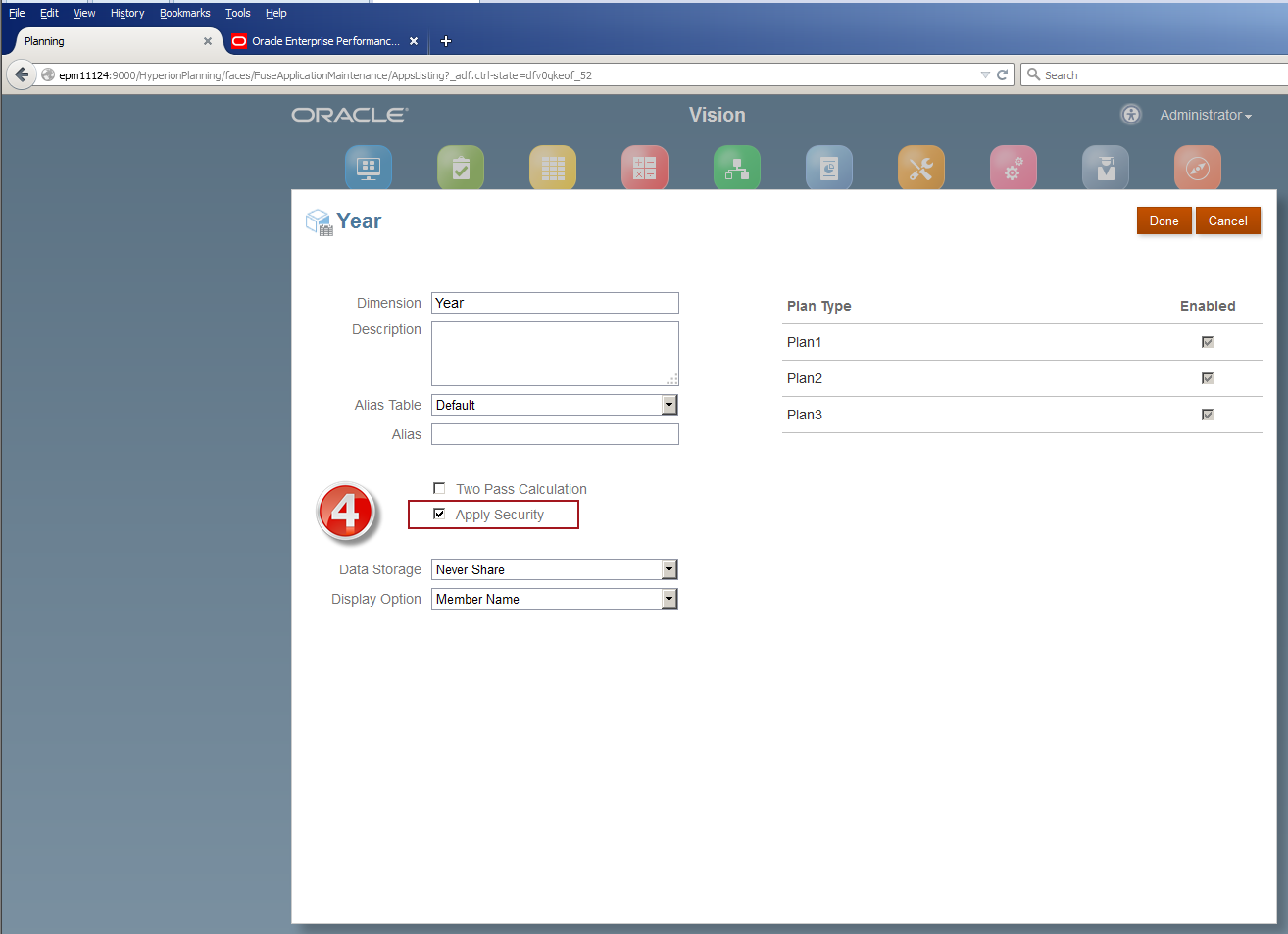 Now that security has been enabled, let’s put it to the test. 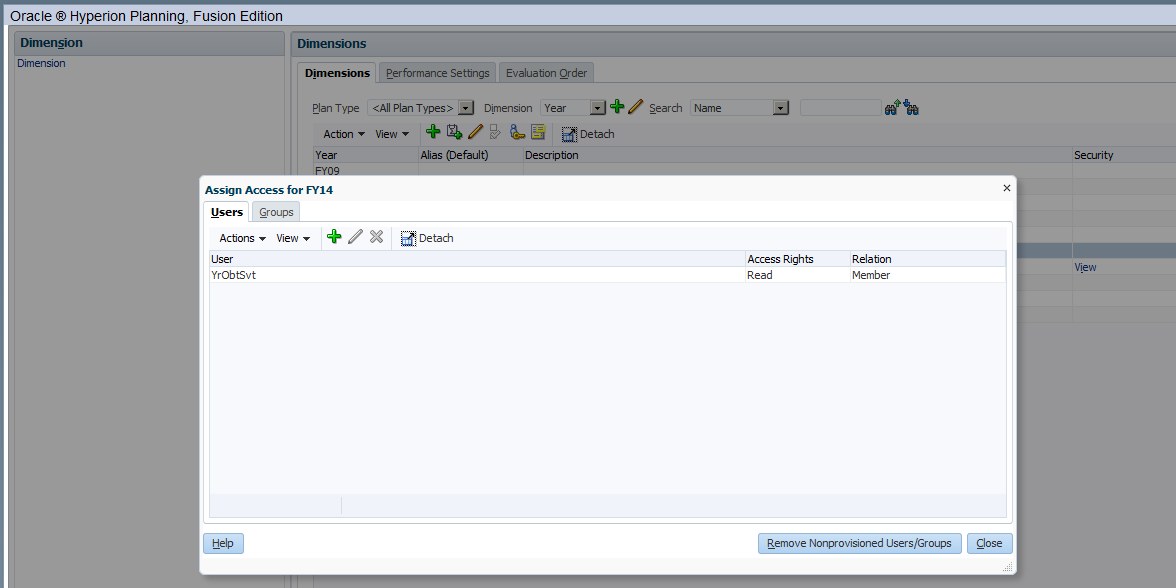 Perform a security refresh and look at the filters:

Note that only FY15 can be written to and in fact FY13 is set to #NoAccess.  That’s different from security even in Planning within forms.  Tell me how you’d turn off read access using the Scenario dimension.  Exactly.  It simply can’t be done that way although there is a hybrid approach below. 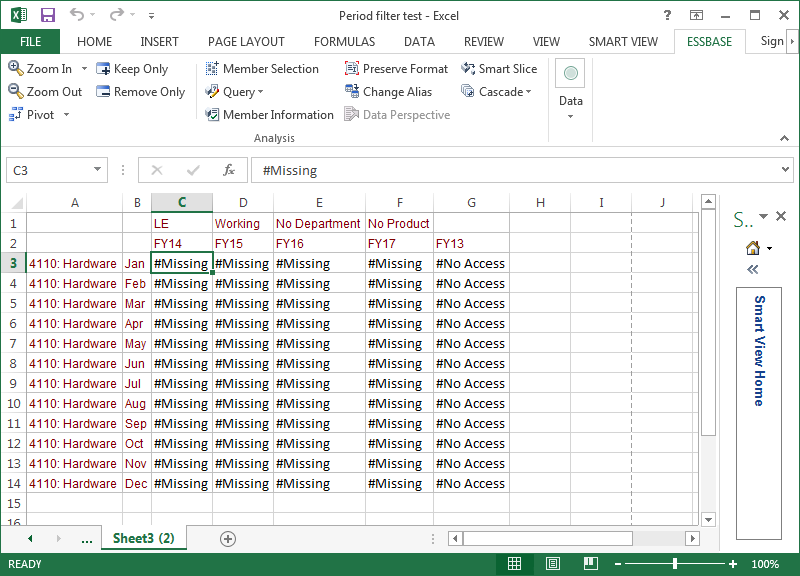 And now try to send in All The Wrong Places: 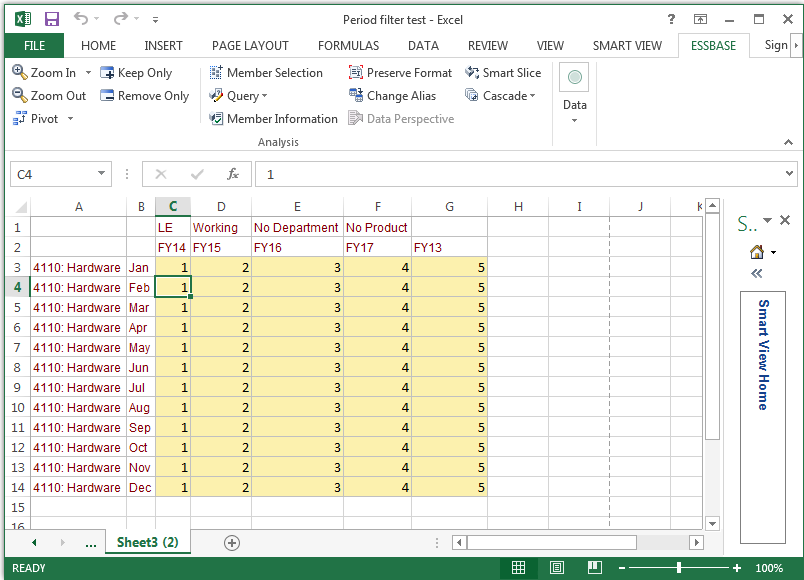 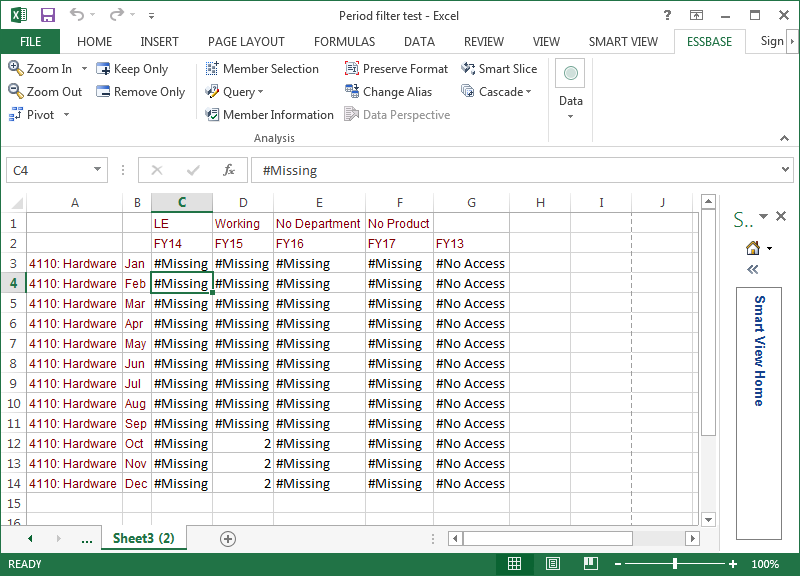 So what won’t this do?

This all works in a single year as shown above.  But what about crossing years and periods the way the Planning Scenario dimension allows so that the last quarter of FY15 is open as is the first quarter of FY16?  No, it cannot as only the combination of FY15 (single assignment to Write) and Q4 (single assignment to Period) are defined in Planning.


If only Planning allowed what are essentially AND coniditons.  Would you be shocked that Essbase can do just that?  No, me neither.


If Planning allowed an AND condition (the world+dog has been screaming for this for, oh, 14+ years – more on this in a moment) the filter might look like this:

With a Write specification on the second line for FY16, submitting this: 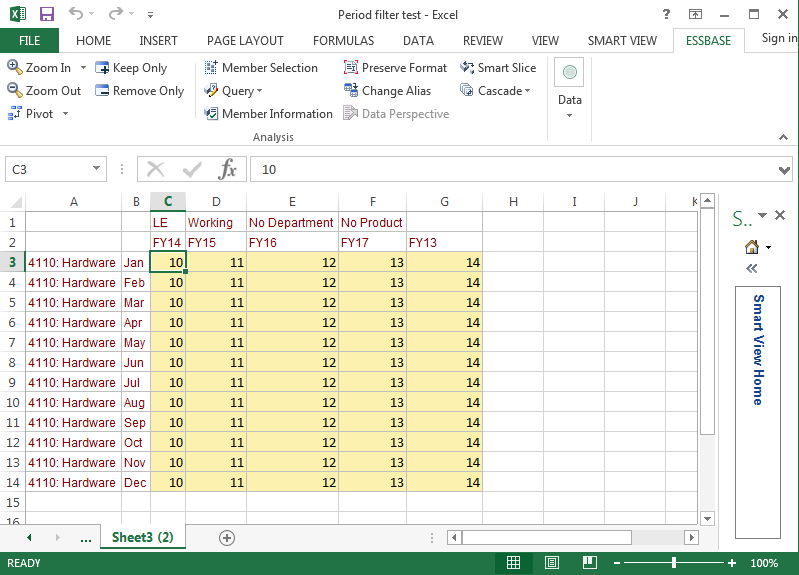 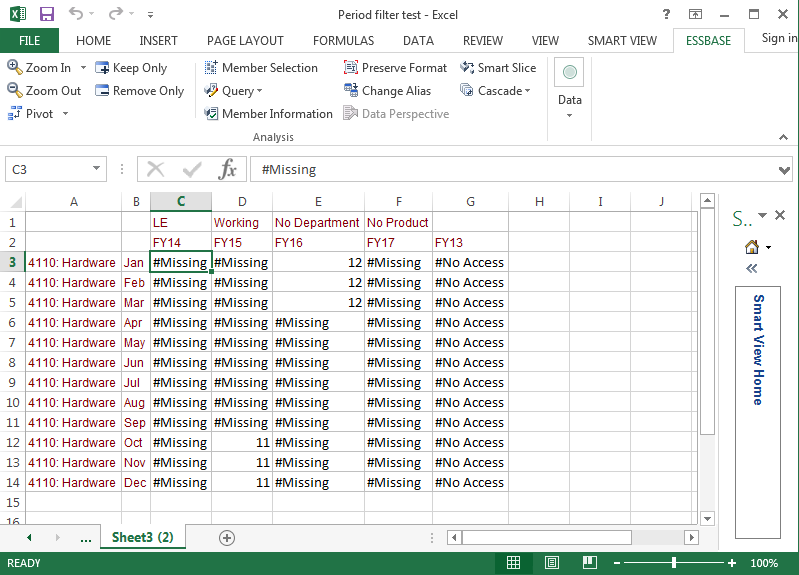 Huzzah!  Wouldn’t that be nice?

So what about Valid Combinations?

At least of the writing of this blog post, 15 October 2015, Valid Combinations are not:


What this means for you is that if you want this kind of functionality, you’ll need to read the tables (again, not an option in PBCS) and dynamically generate the filters.  That may be something I look at in future but for the time being I leave that as an exercise for the reader.


Thanks again to Jessica and Robin for showing me and confirming that this is new-ish functionality that is actually quite useful.  I sure wish it had been documented a bit better but such is life.

If the FY13 None security assignment is used, this form layout: 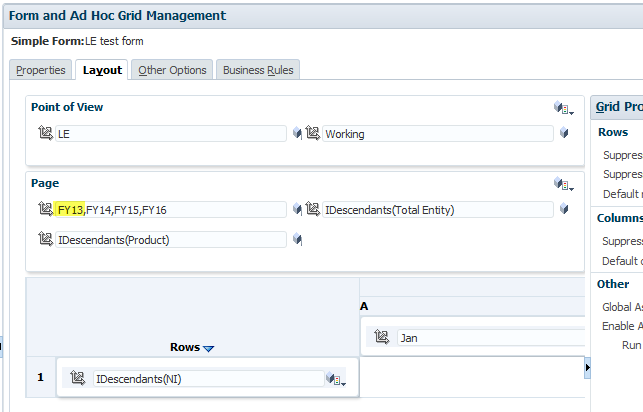 Results in this dropdown.  FY13 is nowhere to be seen.  None really means None in Planning forms. 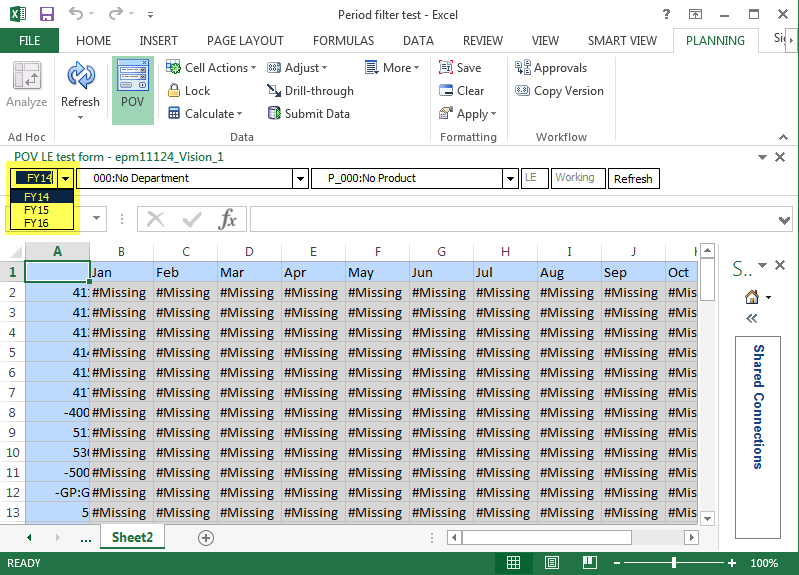 If FY13 None is switched to Read or if Apply Security is turned off completely for the Year dimension, FY13 is now selectable. 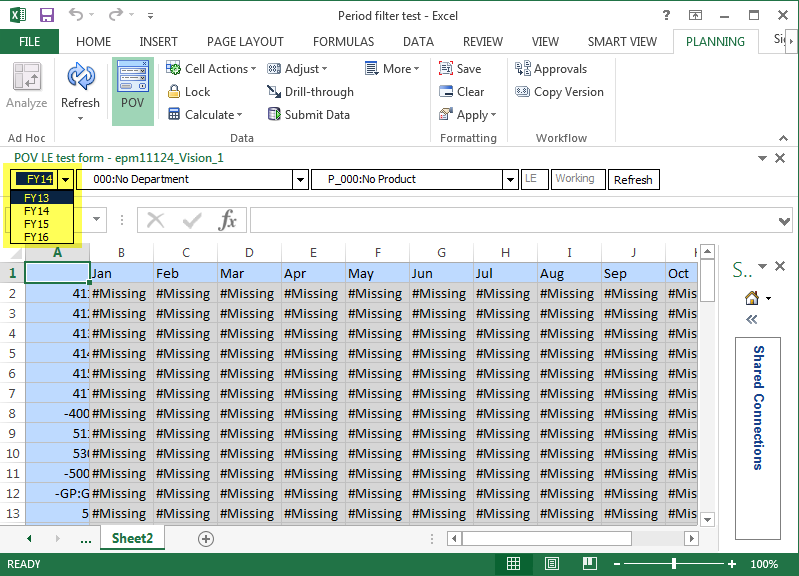 It is a hybrid solution and a Stupid Trick all at the same time, but interesting nonetheless.


Be seeing you once again.
Posted by Cameron Lackpour at 1:17 PM