This was originally going to be one ginormous post on Stupid Essbase Load Rule Tricks but once I got to page 12 and realized I was about halfway through I decided to split this subject into multiple posts.  At the end of it all I’ll put in links to bring everything into a single spot.

With the warning, off we go.

Hate is such a ugly emotion

It is moderately well know that Yr. Obt. Svt. hates Load Rules.  Why?

I hate them because they have an interface that is little improved from the days of Essbase Application Manager.  If you want a feel for what that looked like, have a read through the DBAG which (un)surprsingingly hasn’t bothered changing the screen shots of what is after all fundamentally unchanged from 1993.

I hate them because they are a temptation to those without other data integration tools to manipulate data.  I really and truly have seen instances of over 240 Replace selections in a single rule.  How does one audit that?  Understand it?  Manage it?  Know that it’s actually performing per requirements?  The short answer is notgonnahappen.  Lest I be accused of casing stones at those less fortunate (eh, those of you who have had the (dis)pleasure of meeting me may think that’s a pretty low bar), that’s what the admim had at hand, that’s what he used.  But It Just Isn’t Right when a SQL INNER JOIN would have done the same thing and in a much better way.  But I digress.

And lastly, I hate them because I have comprehensively, completely, and totally shot myself in the foot, fired to slide lock, reloaded from my spare magazine, and repeated ad infinitum.  Seriously, it’s easy to do this even when one is being careful and, Best and Brightest, I’l bet you’ve done it more than once.  Ugh.

Another Load Rule rant over.  As always, it feels so good to vent my Load Rule spleen.

A plea for healing

And yet we need Load Rules.  The latest and greatest version of Essbase, Essbase Cloud Service (EssCS), that Tim German I presented at Kscope16 used – Wait for it! – Load Rules albeit in much improved fashion.  The need to get metadata and data into Essbase (and Planning) remains.  Until that golden day when all of we Essbase geeks are using EssCS or at least enjoying the functionality that it provides in on-premises Essbase we are well and truly stuck with them.  An even better alternative would be to  use the INSERT INTO…SELECT FROM data and metadata nirvana.  A man can hope.

And now a use case

And actually, they can be at least bearable if we only didn’t have to suffer through the interface and kludginess that is a Load Rule.  How can this be done?  Quite simply really – SQL is the answer.
My Very Favorite Essbase Message Board In The Whole Wide World (MVFEMBITWWW)
Over on Network54, there was a thread where the original poster (OP) wanted to dynamically change the number of columns he’d read from a table via a single Load Rule.  Huh?   And then there was the assertation that both overloading (or stacking) single data column as well as dynamic load rules aren’t possible.  Double huh?  That just isn’t so, or at least I don’t think that’s so.

It seems odd on its face but his requirement is to sometimes load history across multiple or a single year and/or sometimes load just the latest period.  It would certainly be possible to stick the year and the period in the column but this is a set of pretty big data at least in Essbase-land – potentially up to 3 BILLION rows.  Eeek.

Putting aside efficiency although I’m not clear on why one would want to do that, this approach would require multiple Load Rules – at least one for just a single period and one for multiple periods – and batch processes and then a selective execution of those Load Rules.  While this isn’t an impossible task, it’s certainly annoying.

Is there another way?  You betcha.

The first step is figuring out how to put years into the column instead of the year.  Using Sample.Basic and (gasp) a text Load Rule and yes this is possible in SQL as you will see a bit later on. Let’s see how this might be done.

Typically each column in a load rule is a single dimension as shown below.  Easy peasey no big deasy.  When I build Load Rules and when I look at what others create this one-to-one relationship is standard. 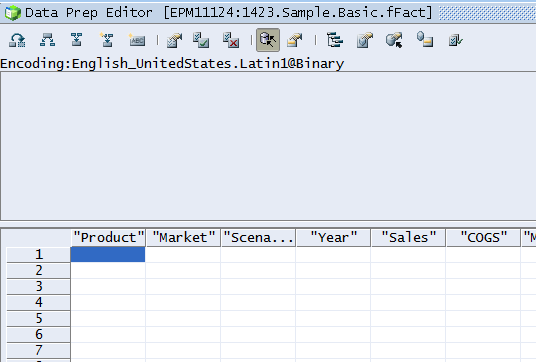 That may be the default but it isn’t the only way to peel an egg.  You can stack or overload each column with multiple dimensions.  By that I mean a column that refers to measure Sales can also be directly tied to the scenario Actual while the next column can be Budget and Sales.

This can be built in a Load Rule by selecting two or more dimensions: 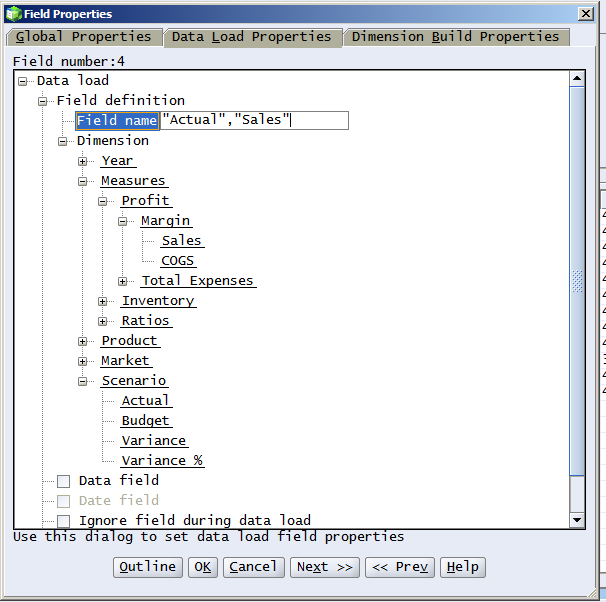 Note well the double quotes around the two member names.  These are important because they act as delimiters.  If not used, Essbase thinks that the string is a single member name of Actual,Sales.  What’s desired are two dimension assignments in one column.

When selected via double clicking on the member names the result is a data column definition looks like this:  "Actual","Sales" 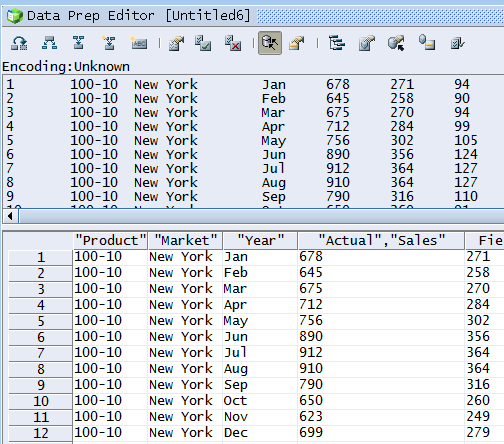 That’s all well and good but as you might imagine I prefer to have the data describe itself.  To do that I can create a data Load Rule that reads the first record as the header: 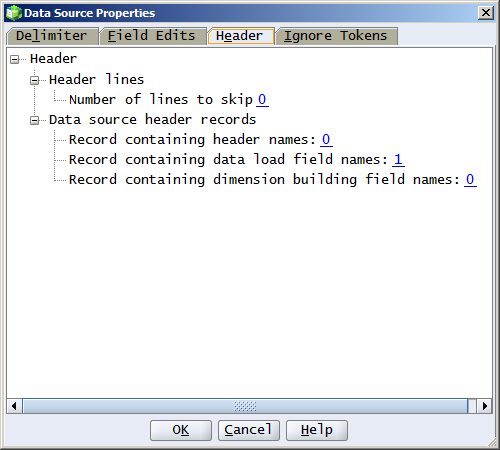 Without data, the Load Rule looks a bit empty: 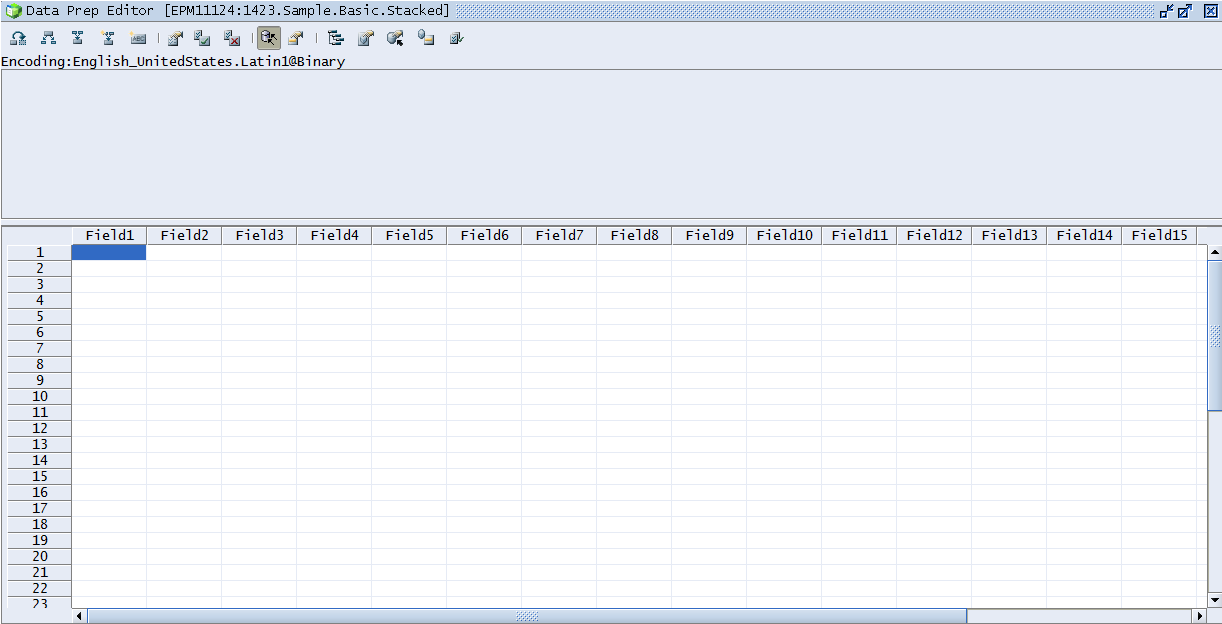 By placing the header record as the first record, and using the above Data Source Property header row definition, the Load Rule magically has the stacked dimension definitions by column.

NB – Essbase automatically trims double quotes so using an escape character is a requirement as shown below: 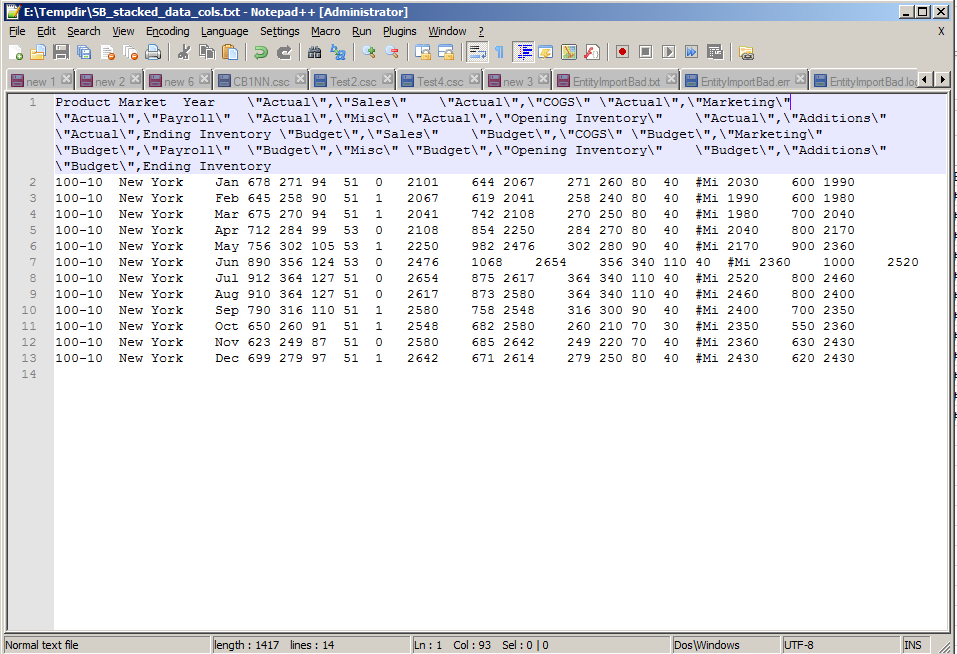 Maybe an easier way to view it is in Excel:

With that, I have a Load Rule that is Actual in columns 5 though 12 and Budget in columns 13 through 20.

For the record, escaping double quotes is performed using the backslash symbol as follows:
\"Actual\",\"Sales\"

Here’s what it looks like in a Load Rule column in EAS looking just as if you’d’ve selected it by hand. 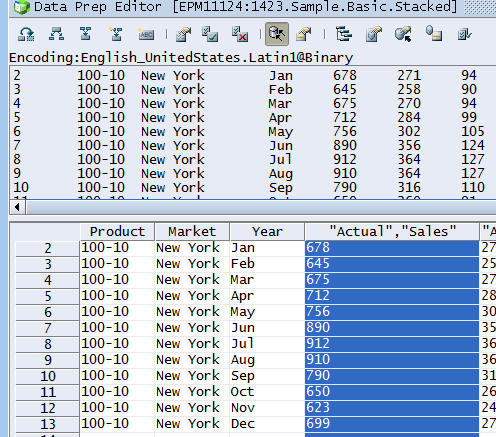 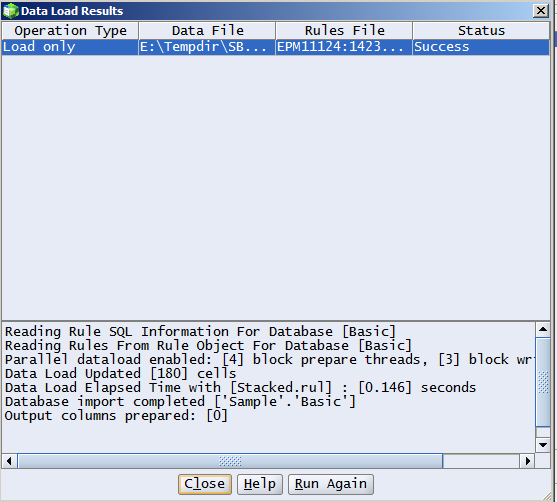 As always, the proof is in the delcious pudding.  I like South African Malva Pudding  but to each his own.

It’s easier in a relational source.  Yes, that’s a drum I beat again and again simply because it’s true.

I can create a simple fact table with the stacked headers I need in the column names: 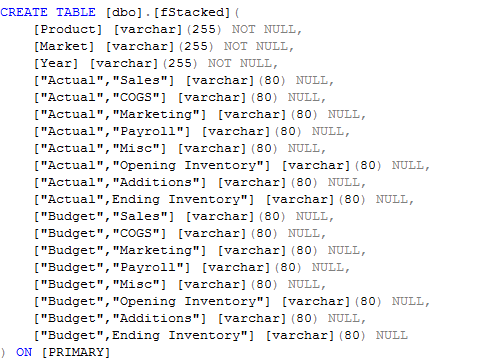 Note how SQL Server (one might think that I’d switch to Oracle sooner or later) sticks [ and ] around the special character double quotes.  There is no need for escaping those characters.  Why it is required in one place and not in another is the Sweet Mystery of Life.

A simple query returns the values: 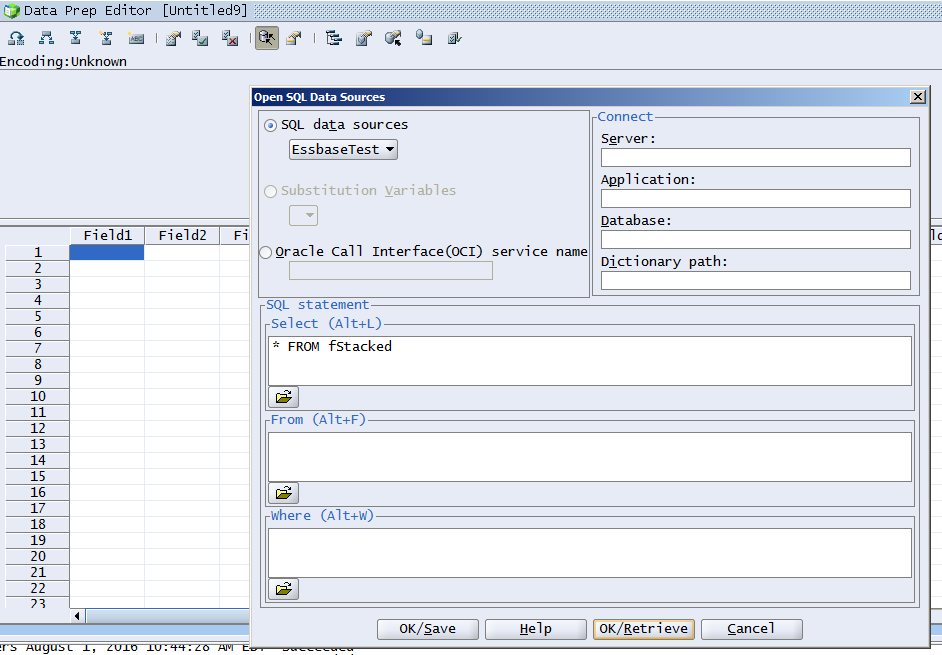 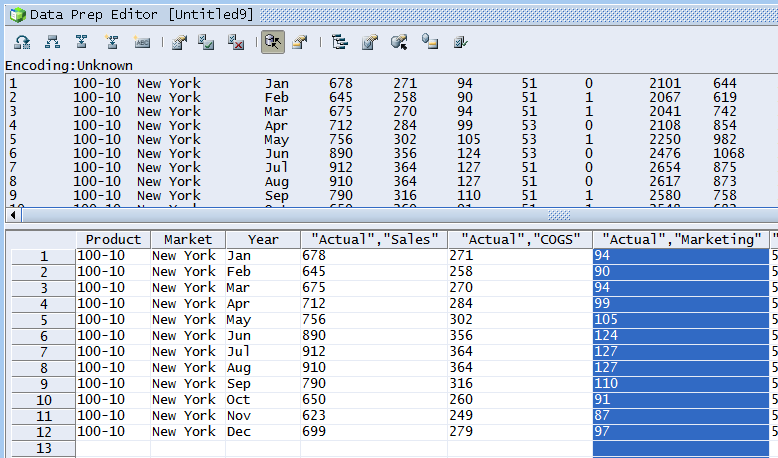 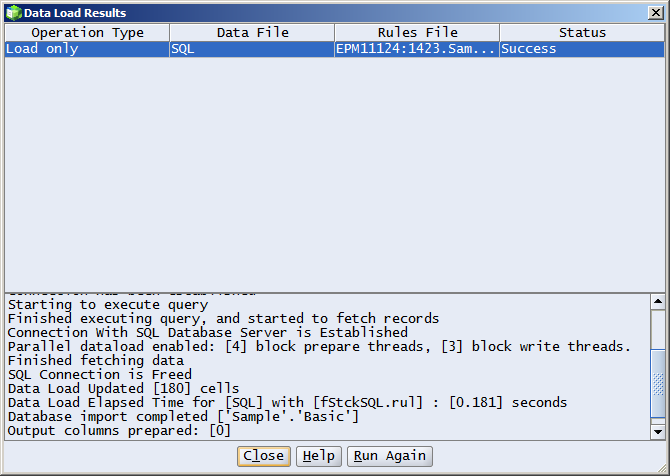 Good grief that was easy.

The next Stupid Trick in this series will show how to selectively turn columns on and off in a Load Rule.

Be seeing you.
Posted by Cameron Lackpour at 9:33 AM

Cameron,
In my KScope12 and kacope15 sessions I described what you presented. As a matter of fact, commas can be irksome in the header so you can actually use the cross dim operator Jan->FY16 and it will load as well.
Unless you have spaces or some special characters you don't have to double quote the member names.

Yet another awesome trick!

I have to shamefully admit that I don't get to attend your sessions. Next year will be different as I'll be off the board and can actually attend what is a pretty awesome conference. Will you have something extraspecialcool?

Re the double quotes, when I tried to *not* use them I got errors. I noticed that manually selecting the dimensions in EAS threw the double quotes around the members. Dunno. But I like even better the idea of cross dims in the headers. Commas, especially in csv files, are just evil; the example I used is tab delimited.