What happened to live blogging Kscope14?

That, as the saying goes, is a great question.  Kscope happened.  I have never, ever, ever been so busy over a sustained period of time as I was this past week.  Ever.


Sleep?  Gave up on it.  Food?  Gave up on it.  Coffee?  Definitely did not give up on it.  Fun, learning, networking, giving?  Gave all I had and more, just like everyone else at the conference.  I will say that not getting sleep at Kscope is par for the course, but literally not having enough time to eat…Not Cool.  I usually carry some kind of energy bar.  Good thing or I’d have completely dropped dead.


So that’s my excuse, I was just too busy to blog.  Surely eating and sleeping do have to have some kind of priority?


It gets worse and worse every year.  Or is that better and better?  You decide.

So, Cameron, what did you do?

Yet another great question.  Natalie Delemar aka @EssbaseLady and I were comparing notes about sessions post the conference.  I figured out that I managed to go to just two sessions other than my own.  Two.  That’s really a bit disappointing but it does sort of explain why I seemed to live on Mojo bars.


So yes, after all that I think I understand the paucity of sessions.  What a conference.

Yeah, you were busy.  So what?

My presentations with BFF Tim German

ASO Planning – Do this, not that

ASO Planning, is real, powerful, and hugely fast.  Even procedural calcs with a sufficiently powerful hack (If there was a hack meter, and its range went from 1 to 10, this one would be an 11, thanks to Joe Watkins.) can be almost absurdly, did-it-really-calculate fast.  I mean fast.  ASO Planning isn’t for everyone (there are licensing, calculation complexity, and other considerations, but not very many), but if your application fits within its constraints and needs ASO Planning’s speed, I would definitely encourage you to look at it.  It can be magic.


Several blog posts, maybe another presentation, and a webinar or two may come out of this session  – there was a ridiculous amount of content we couldn’t use because of time constraints.

I think it’s safe to say that Hybrid Essbase is a revolution and it will change what we do with Essbase.  It’s almost better than ASO, and I think ASO itself is a very exciting concept and a proven product.  The marriage of an ASO-like aggregation and query processor with BSO is going to solve all kinds of design and performance issues that BSO imposes.  And we get to use BSO’s rich calc script language.  Magic.

The two presentations I managed to see

I’ve already blogged about this in my Day 2 post.  As always, the snipping and bickering between the two of them reminds me of an old married couple.  I think they like each other.  And no question, Glenn won that contest.


It’s mostly basic stuff, but I did like the review of Glenn’s accumulation trick.  It’s a clever idea that allows you to get dimension totals while skipping intermediate aggregations you don’t need for allocation purposes.


There was however something about what he and Edward went back and forth on that bothered me.  As I looked at the code sample, I wondered how the code worked when it was run more than once.

The concept is really quite clever:  loop level zero members adding their value to a top of house (or wherever if you used @RELATIVE and an intermediate hiearchy ancestor) ancestor skipping all of the intermediate hierarchies between the bottom and top levels.  There could be quite a few so time would add up making this a fast approach to get that total for allocations or whatever the purpose is.

The answer is yes. 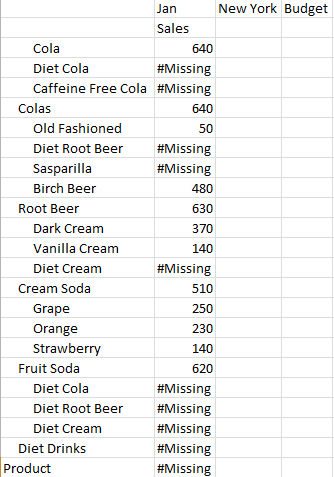 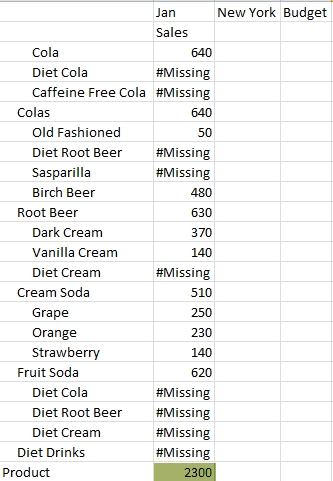 The sting in the tail

So what happens if 100 is entered into Sasparilla? 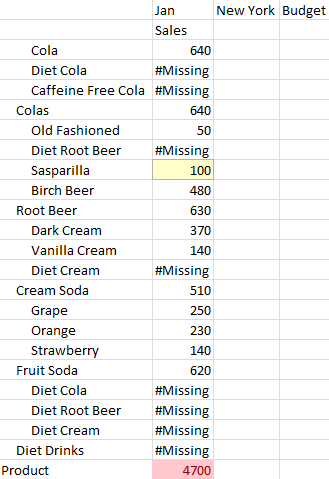 Unpossible!  But all too true.  What happened?

Simply that there was already 2,300 in Product->Sales and Glenn’s technique added another 2,400 (the already existing 2,300 from all of the existing level zero Products and the new 100 in Sasparilla).  If the technique doesn’t clear beforehand, the code will return unpexpected results.


I can almost hear Glenn say, “But it’s not an aggregation, it’s an accumulation.”  And so it is, and it is fast.  Having said that, usually well-written BSO calc scripts can be run one or a thousand times in a row and return the same result each time.


If you want to use this technique, make sure you have a way of clearing out that top Product->Sales member before you run this code.


NB – It’s not that this accumulation approach is bad (I actually like it else I wouldn’t bother to highlight it), it’s that it breaks the normal behavior of Essbase aggregations if the developer isn’t careful to remember that he isn’t aggregating, but instead using a clever hack.


Glenn, MMIC, you may very well have stated this and it flashed by me, but I sort of don’t think so and this could really trap the unwary.  If you talked about it, think of this as a further illustration of your amazing acumen.  If you didn’t, I’m here to correct your mistakes.  :)  Heaven knows if I am correcting a mistake or oversight, this might be the second or maybe the third time.  I contrast that with the 100 (at least) going the other way.

Speaking of the power of Hybrid, see Planning on the cloud

Shankar Viswanathan and Prasad Kulkarni really wowed the crowd on this one.


I’m going to write a blog post on this one as well as there’s simply too much to go into but the act of opening up a 120,000 row grid, changing drivers, having it flow through into calculated results, and then aggregating immediately, live, well this particular geek almost swooned.  Just as well I didn’t as the choice was either the carpet or the metal frame of a chair.  I like all of my teeth and I like them still in my mouth.


In other words, Planning cloud demoed really well.  If it works half as well as it demoed, they will have knocked the ball out of the park.  If it works as well as they showed…well, that will simply completely change the way we architect Planning solutions.  Interesting and fun times lie ahead.


We can (if all goes well) hopefully expect this around the end of the year although as always Oracle reserve the right to say it was all a gigantic game of Let’s Pretend.

I have a steam punk smartphone, aka, it’s five years old and its camera isn’t exactly on the cutting edge of functionality.


Happily I happen to know some people who are apparently not as cheap as I am (the phone, text, and email bits work, mostly, just fine, thanks) and thus can actually provide photographs that can illustrate all of the cool parties that only happen at Kscope.  Thanks go out to Leticia and Jessica Cordova (yes, they are sisters who work together in EPM and that is actually pretty cool) who were kind enough to take time out to get some great shots of the entertainment and send them to me so I could post them here. 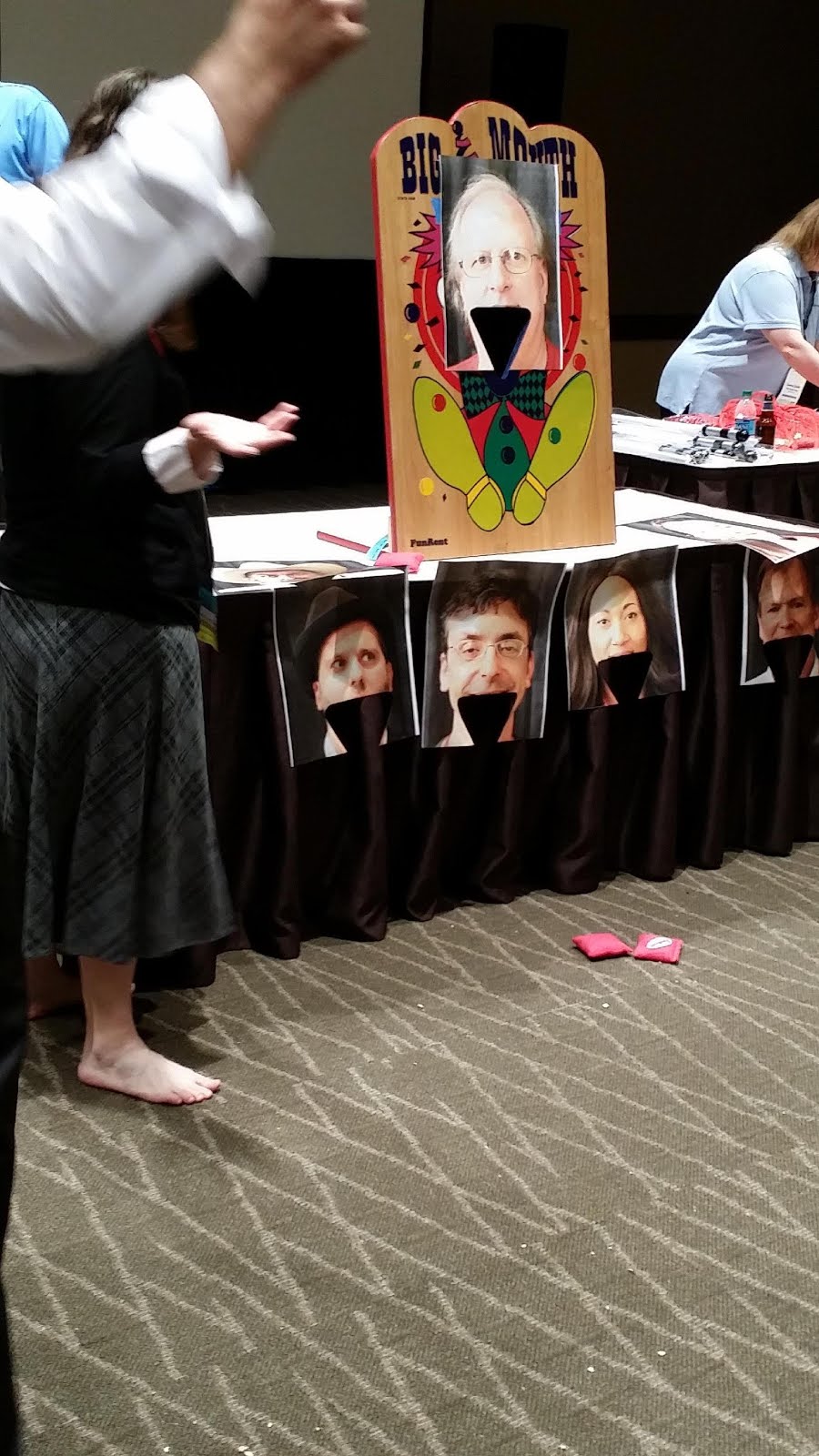 Tim Tow of  AppliedOLAP and Jonathan Berry of Accelitis threw a great big shindig at the Seattle Space Needle.  That was super cool, and the view from the top was amazing.  Of course, what do people take photos of when they’re at the top of a tall building that overlooks a beautiful city?  Other people on top of that tall building. 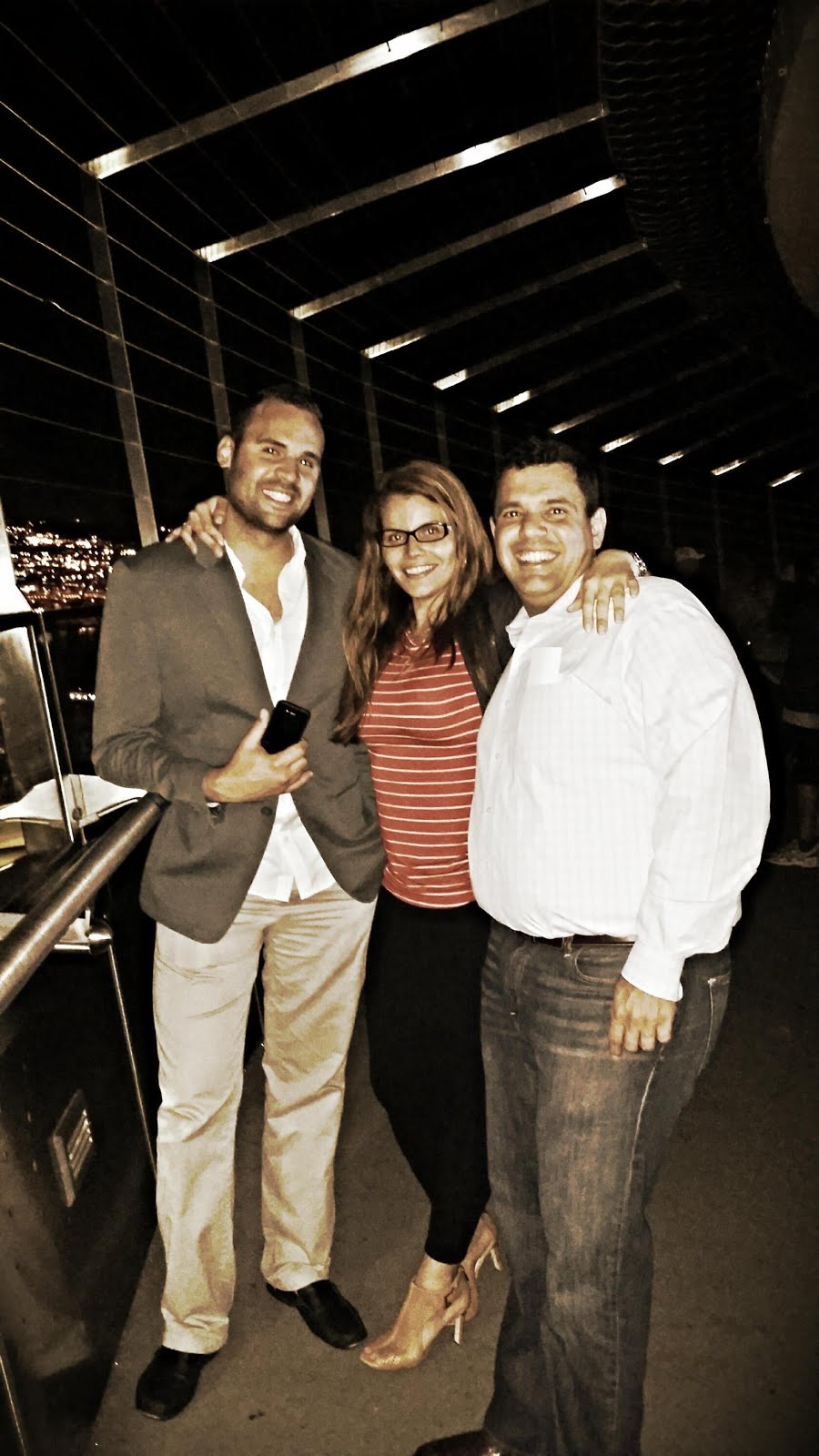 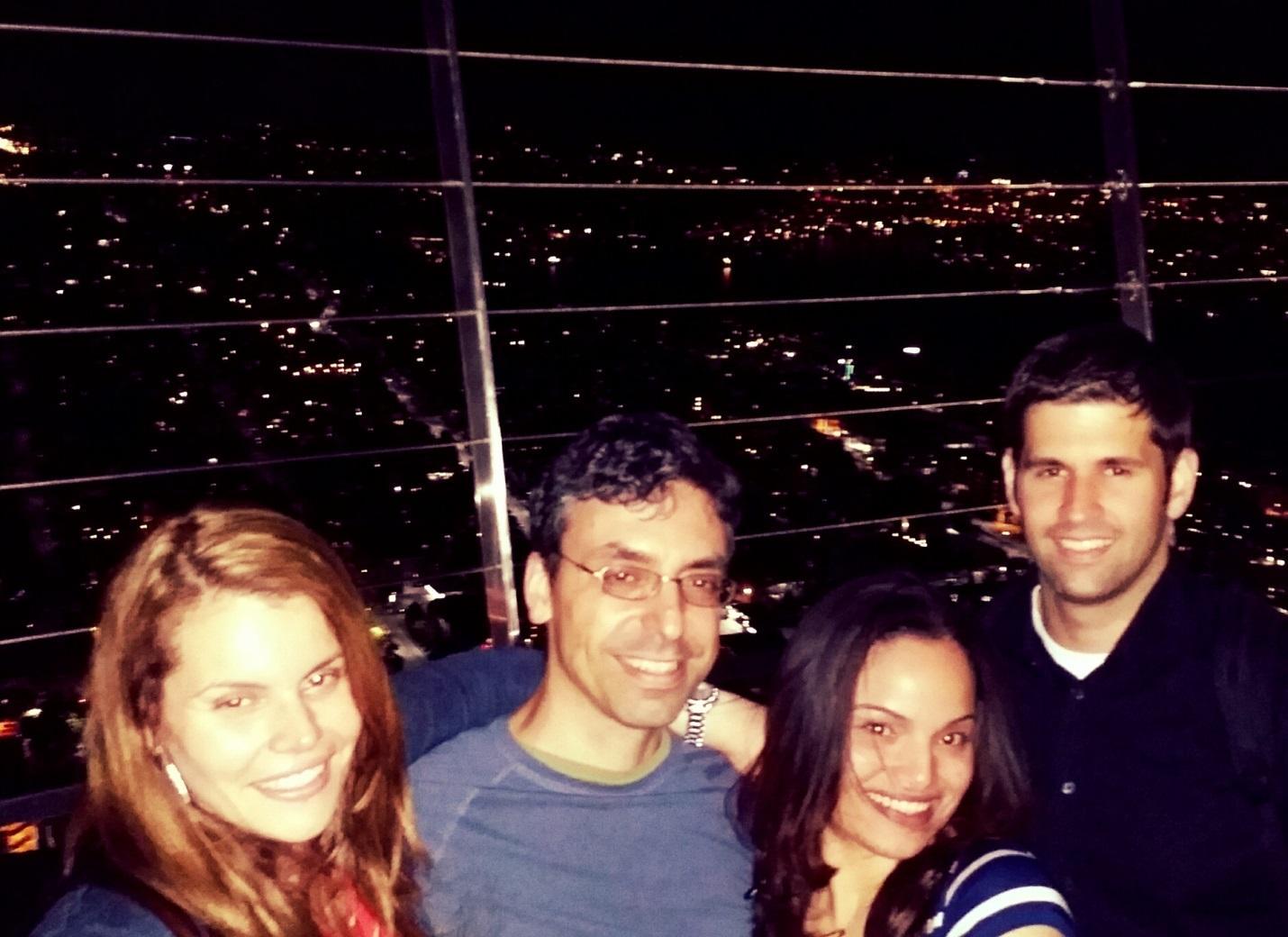 Okay, to be fair, here is why cell phones are not used to do real photography: 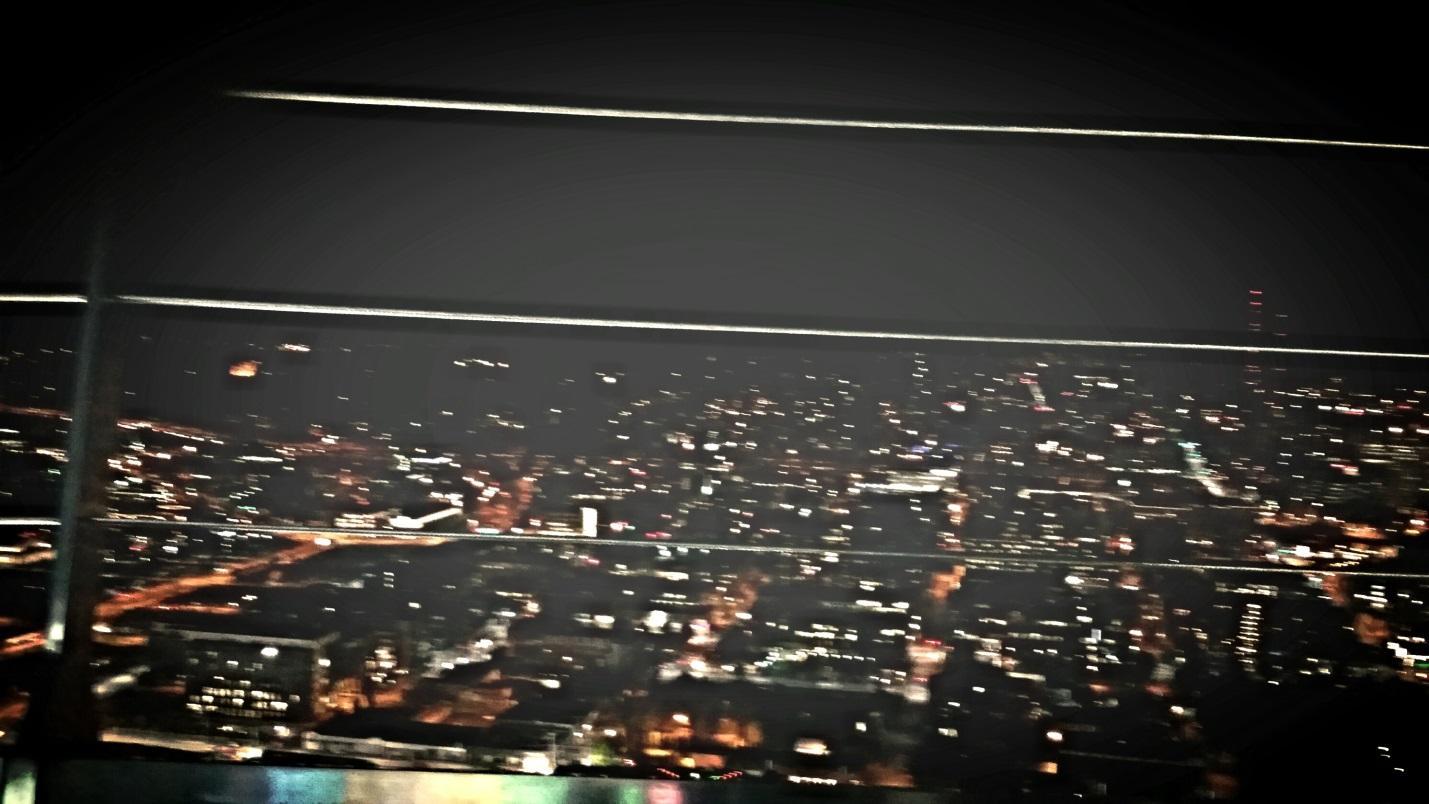 It was sort of interesting when Joe walked into my Hybrid presentation and sat in the front row as I was halfway through a slide.   I just about lost it.  This shot of Joe, at the conference well before he actually needed to look like a refugee from a big hair band, is stolen from @EssbaseLady. 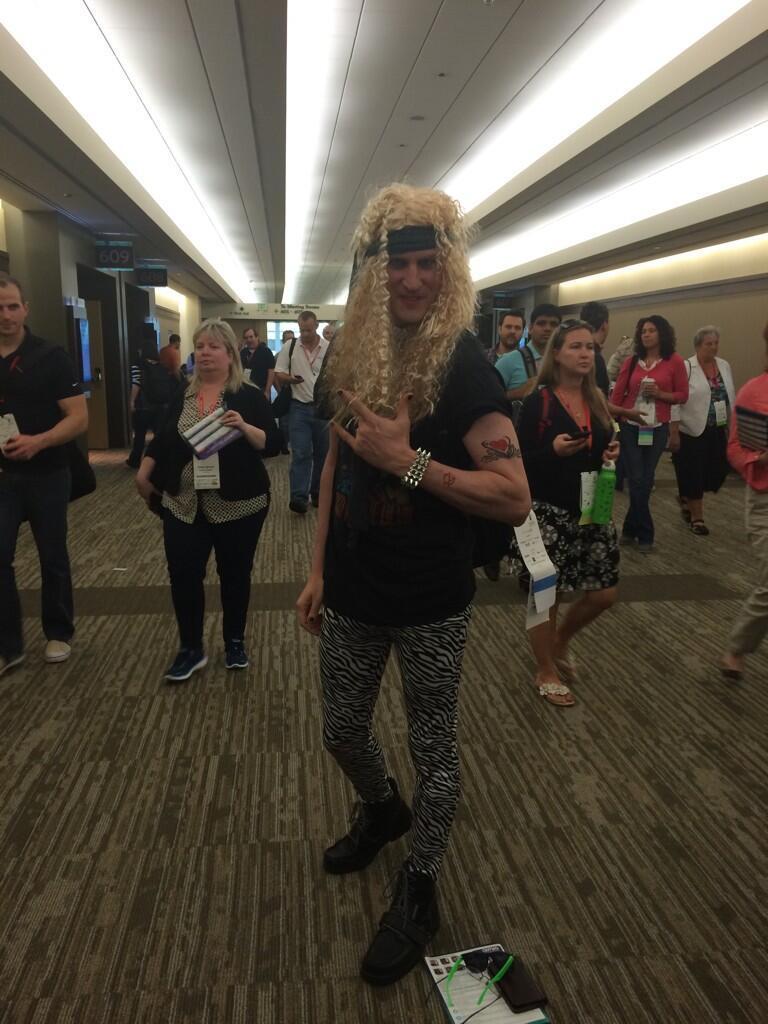 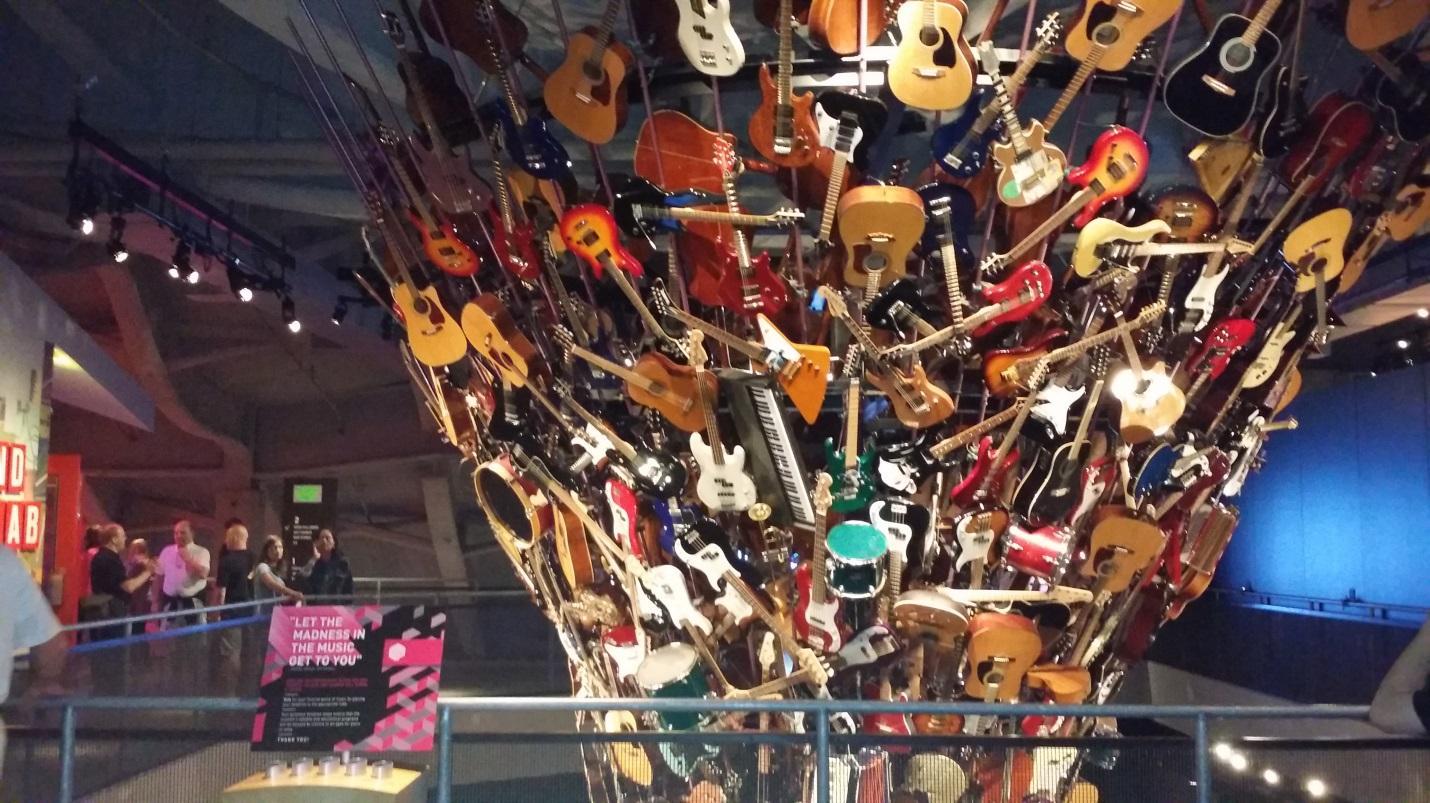 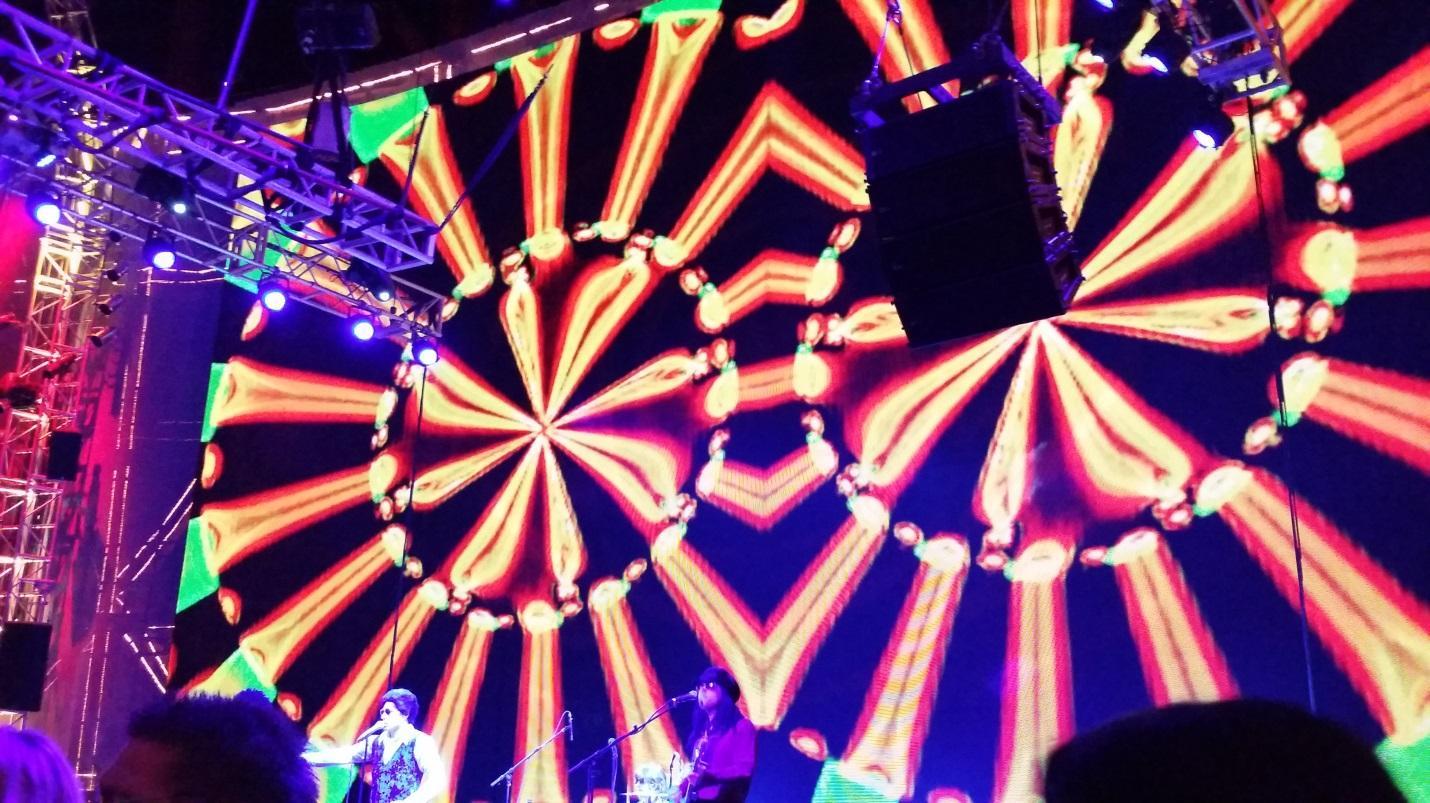 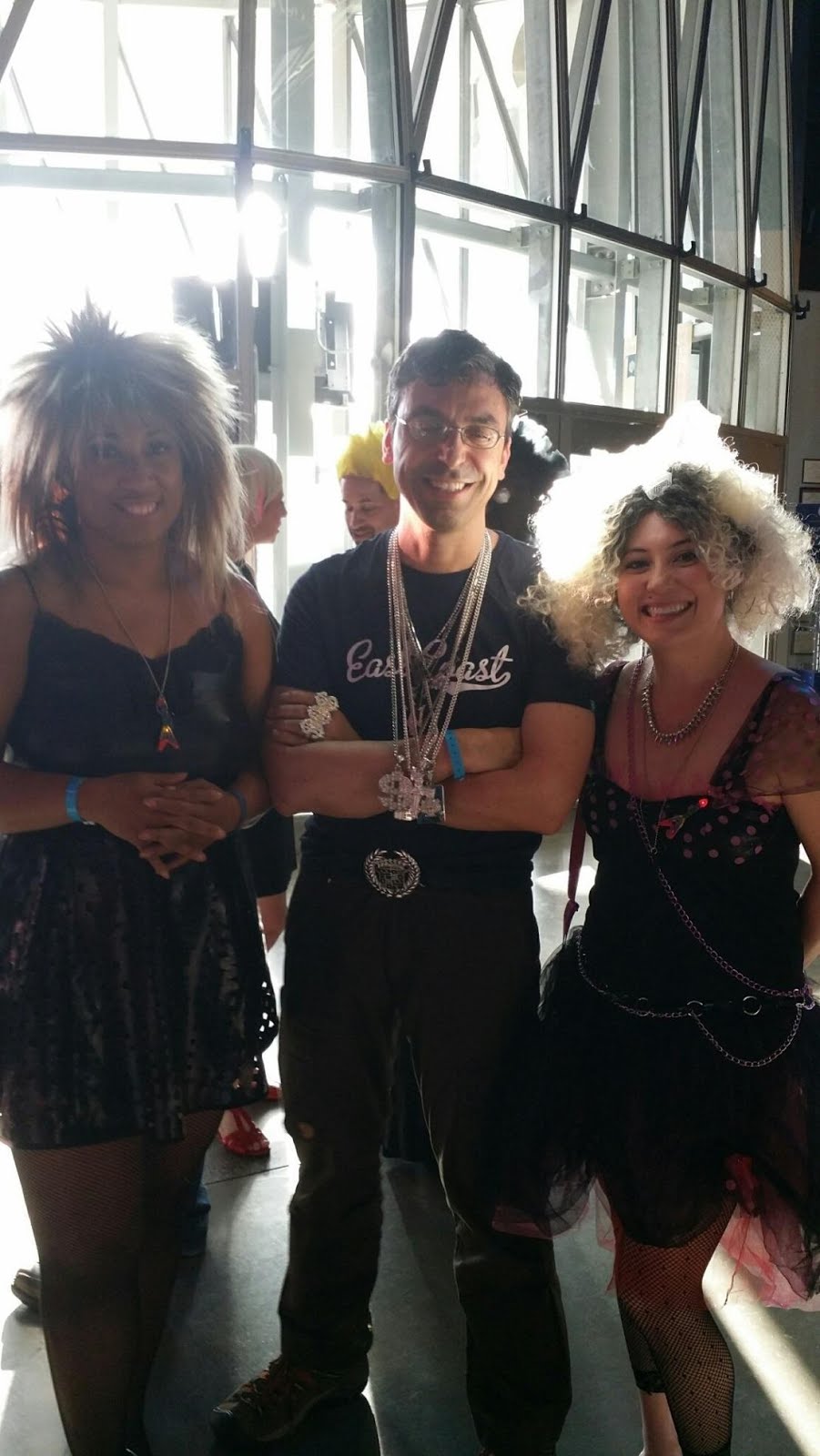 Do I look like money?  I’ve got it on my fingers and round my neck.  But not in my wallet.  Sigh.  Perhaps the glare from the bling is why my eyes are closed?


Btw, that is Natalie Delemar, conference chairwoman on my right and Opal Alapat BI/EPM content chairwoman on my left.  I understand each and every one of us has a serious, real, and responsible job.  I agree, it is somewhat hard to believe.

Professional dancers (really quite good; certainly better than drunk geeks getting it on) 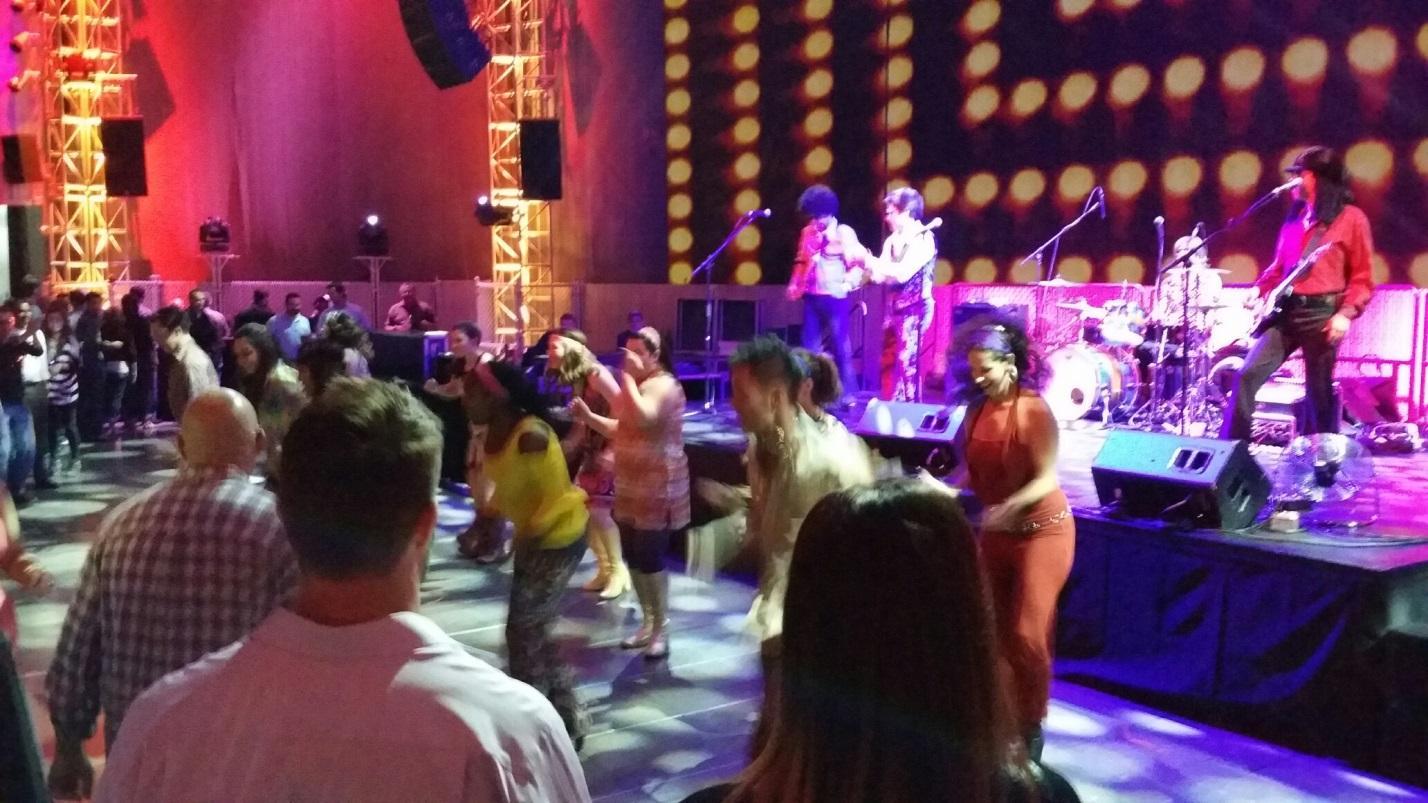 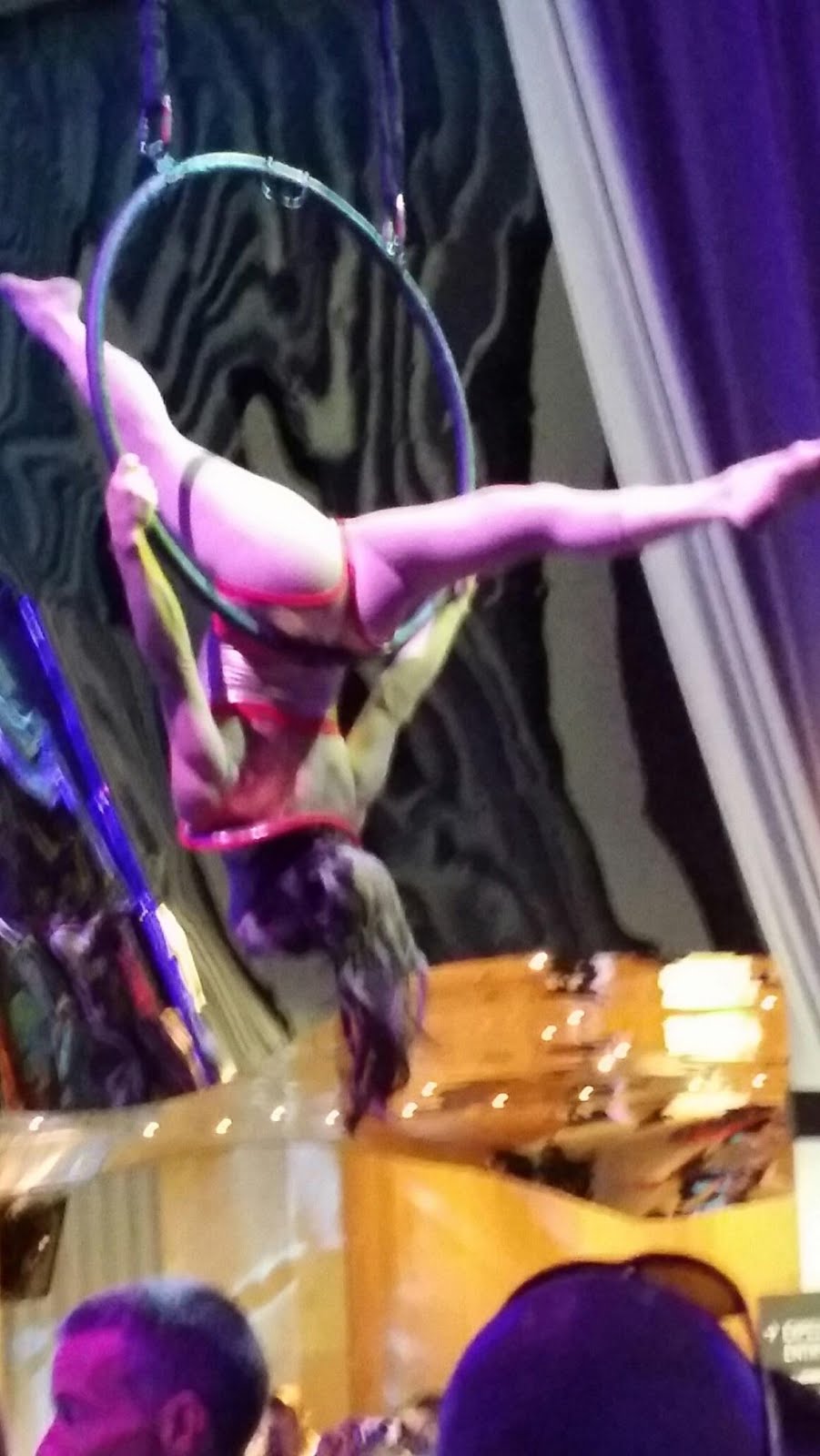 In short, as only Kscope seems to be able to do, an outstanding series of entertainment events.  No one does it like ODTUG.  No other conference is like Kscope.

And now we begin planning Kscope15

Kscope14 was the best Oracle user conference ever, bar none.


ODTUG will now make Kscope15 the best Oracle user conference ever, bar none.  That means it will beat Kscope14.  Such is the penalty of awesomeness.


That awesomeness doesn’t come from Seattle, or the EMP museum, or a really nice convention center, or even the awesomeness of new product demos and strategy direction Oracle give.  Kscope isn’t about technology at all, it’s about people.  People who give time, effort, and money (never forget the opportunity cost of all of that time) to make sure that attendees meet life-altering friends, learn career-changing techniques and theory, and experience the transformative opportunities that only physical contact with a group of like-minded individuals can bring.  Those communities are what make ODTUG and Kscope special, and in some way they’re what makes Oracle the special and successful company that it is.  It all comes back round to people and Kscope is the vehicle that unites those people.


Every conference is like magic in a bottle and I begin thinking about the next one before the current one has even finished.  Only crazy (I am sort of sure I’m not crazy.  I think.) or crazily passionate (guilty as charged) people think that way but the awesomeness of Kscope has that kind of influence.


If you work in Oracle technologies, and you don’t come to Kscope, you’re crazy.

Hi Cameron! It was a really solid presentation about ASO planning! Got a lot of new information and enjoyed the session. Could you please upload a new version of powerpoint presentation of this session? The one that is in the ODTUG app is a little bit outdated. I am most interested in RUNJAVA parameters as I could find this information anywhere else in the internet.
Thanks a lot,
Maxim

I've uploaded both the ASO Planning and the Hybrid Essbase presentations.

There's way more in these slide decks because we had to cut so much to get the presentations to fit in the 60 minute slots.

Look for a webinar or two to come out of these sessions.

Cameron,
What you miss from the slide is I mention that you need to fix on the intersection that will hold the result and clear it prior to the accumulation. Since it is a small number of blocks, it is very fast to do the clear and while I don’t have evidence, it does put the blocks you will be writing to in memory so there is less disk I/O.
Glenn

I posted this because your slides didn't show the clear. People who download your presentation (okay, they can't as of a few days ago as there are only two pages and the second one is blank) might not pick up that verbal warning.

We are, btw, in complete agreement on this being super cool and useful.

Hi,
A question if I may, how does the block for "Product" gets created during accumulation script execution.