Yup, another South Florida EPM meetup and the best yet

Yup, another one and the best yet

I just attended my sixth (I think it was the sixth but it’s all beginning to blur a bit.  Fifth?  Fourth?  No matter.) South Florida meetup out of the 15 or so meetup groups ODTUG have appleseeded.  Wherever they are, meetups are in one word fantastic.  Why?


Six reasons aren’t enough?  One would hope so.  If you’re not convinced let me review for you what made the latest meetup on 18 August 2016 in Miami, Florida so special.

While meetups can run on a shoestring – and sometimes these are the best of all – this latest event was a wee bit more organized and thus took money but not to the attendees.  Yup, you read that right:  this mini conference was free, gratis, sans frais, and geen kosten.  Did I mention I like ODTUG meetups?  Why yes I did.


ARC EPM, Secure24, and Top Down Consulting all generously contributed.  Thanks, Jessica Cordova, Monica Gordy, and John Riley.  It wouldn’t have happened without you.

Good grief there was an awful lot going on.

Jessica, meetup organizer extraordinaire as well as ODTUG EPM Community meetup lead, kicked it off.  I’ve talked to Jessica in my role as the ODTUG board’s EPM liaison and she’s gone from nervous neophyte to seasoned practitioner.  Let her use her experience to help you set up a local meetup. 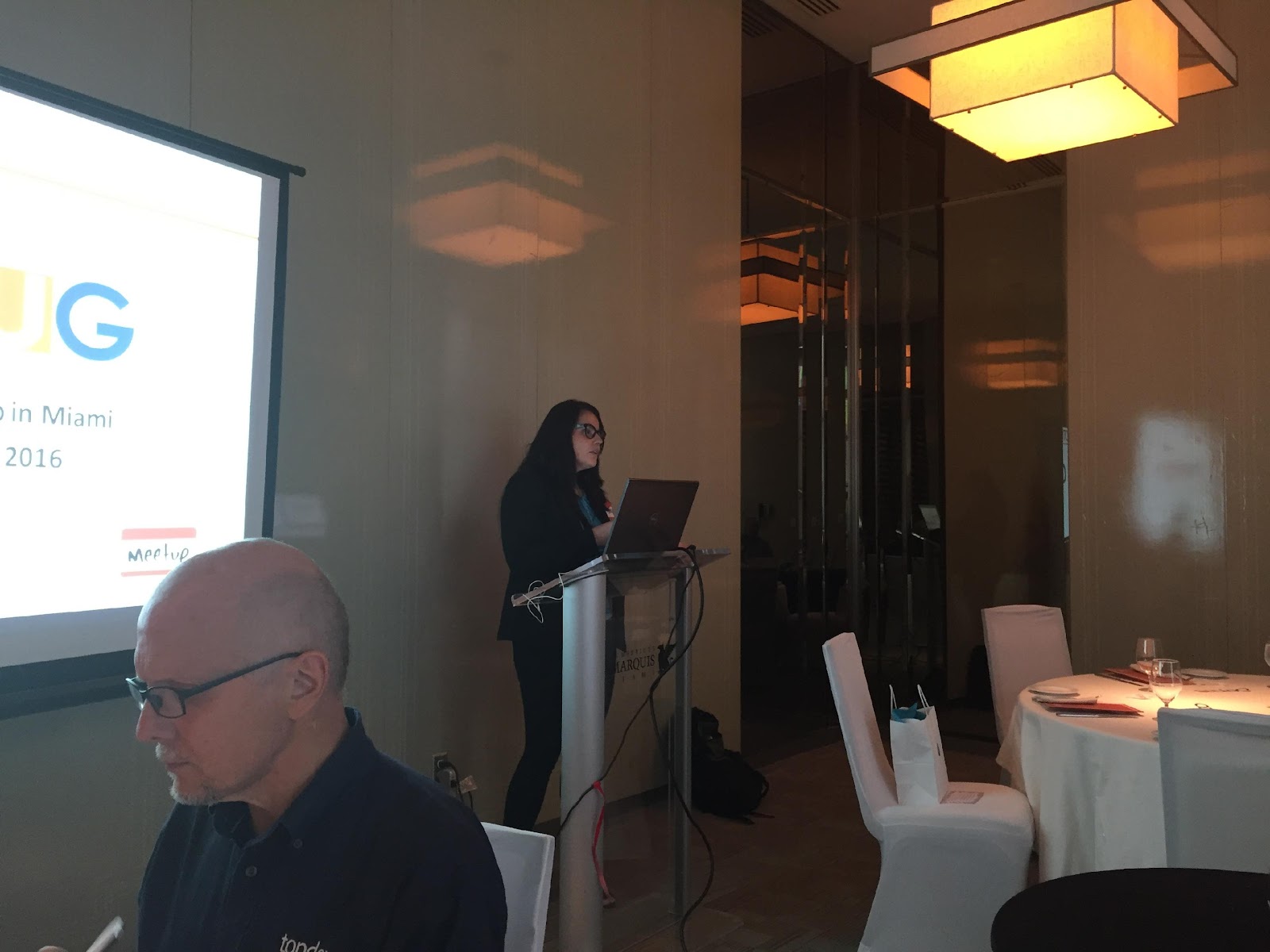 Who says there’s no such thing as a free lunch?  ‘Cos there was.  I had the chicken.  It sure beats the PB&J I typically have whilst working at home.

Having once witnessed that as a disinterested observer (they were going through existential angst, I was having a Rob Roy at the bar), I’m entirely happy to relate that wasn’t occurring at the meetup.  What actually was happening was geek speed networking which happily misses the aforementioned exercise’s desperation but shares the notion of enabling EPM geeks to meet fellow EPM geeks.


There, I’ve probably insulted half of my readers although I think it’s debatable which group I’ve insulted with what.  Sometimes I amaze myself, but almost always in a bad way.  Whew.


Clawing my way back to relevance, it was a fun and effective way of meeting perfect strangers.  My only complaint is that we didn’t have enough time to do this for everyone (not all of us could meet everyone) but it was a big group (22 not including Yr. Obt. Svt. and two others).  This is a nice problem to have. 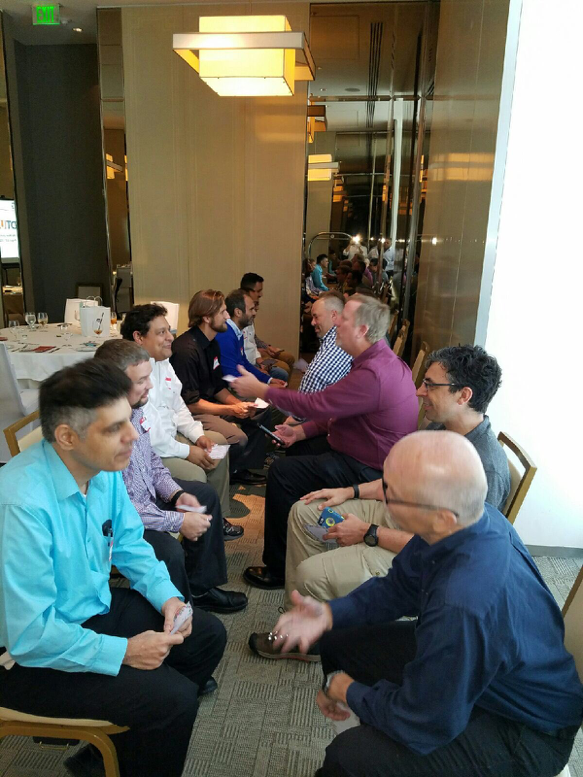 Some of us really got into it.  And why not? 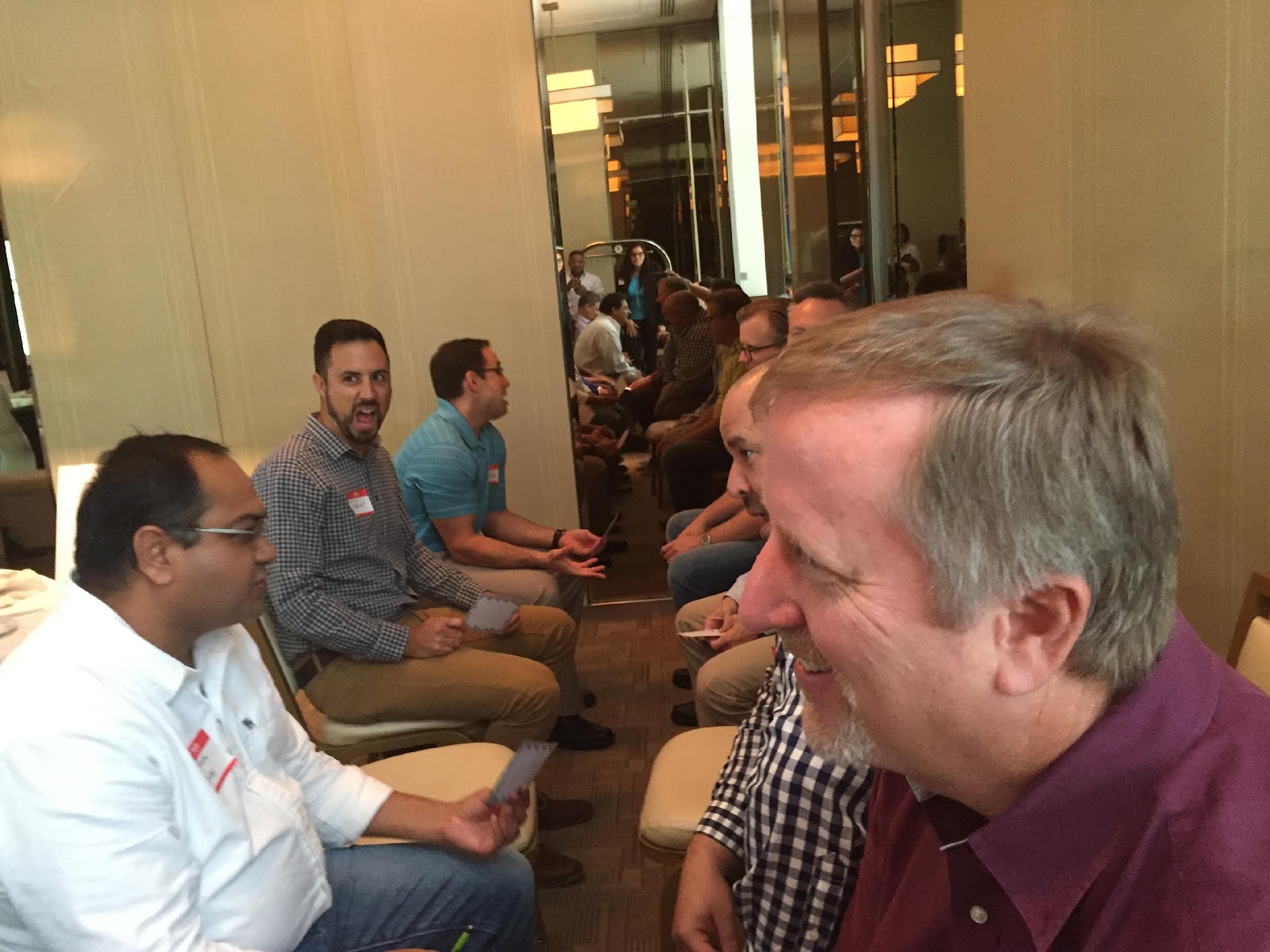 As noted Yr. Obt. Svt. reprised the Kscope16 presentation Jason Jones and I had on PBCS administration vs. on-premises.  Jason, I mangled the bit about your PBJ API framework for PBCS but I blundered through to the best of my ability.  Here I am rehearsing that morning disheveled, unshaven, and unshowered.  Eeek.  See, Gentle Reader, I do this all for you. 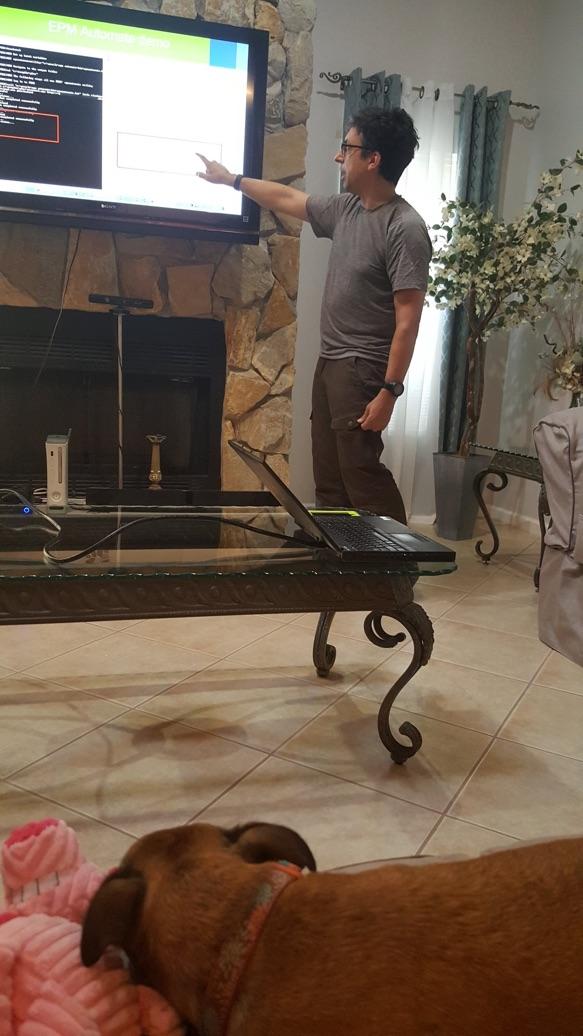 
Ron Moore and Ludovic de Paz presented their “(Keep) Pushing the Envelope with New Calcs Features”.  I used Ron’s section on FIXPARALLEL directly after the meetup to parallelize a DATACOPY section of an administrative currency conversion fx calc script.  One can’t ask for more than that when it comes to actionable information.  I should note that long ago in another professional life Ron Moore taught me ASO in one of his classes.  I’ve presented with Ludovic as well as Paul Hoch re Calculation Manager usage.  I guess my point is both of them know me, both of them knew I would be there, and both of them showed up anyway.  Thanks, guys. 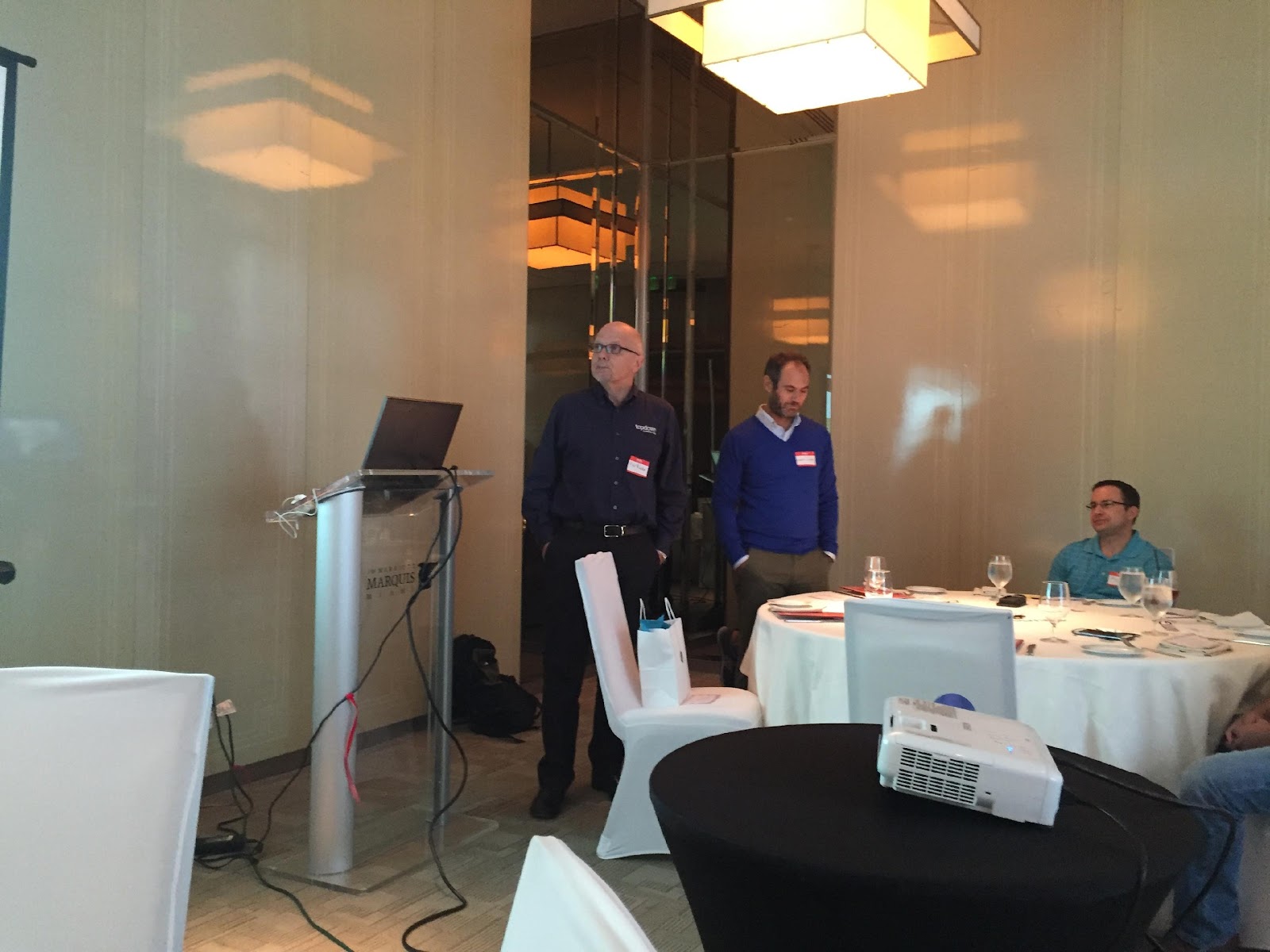 Do people value these things?

Do you see that upper left photo in the collage below?  That’s Dhaval Shah and he drove two hours to attend the meetup.  He even won my latest book.  That’s hunger for knowledge. 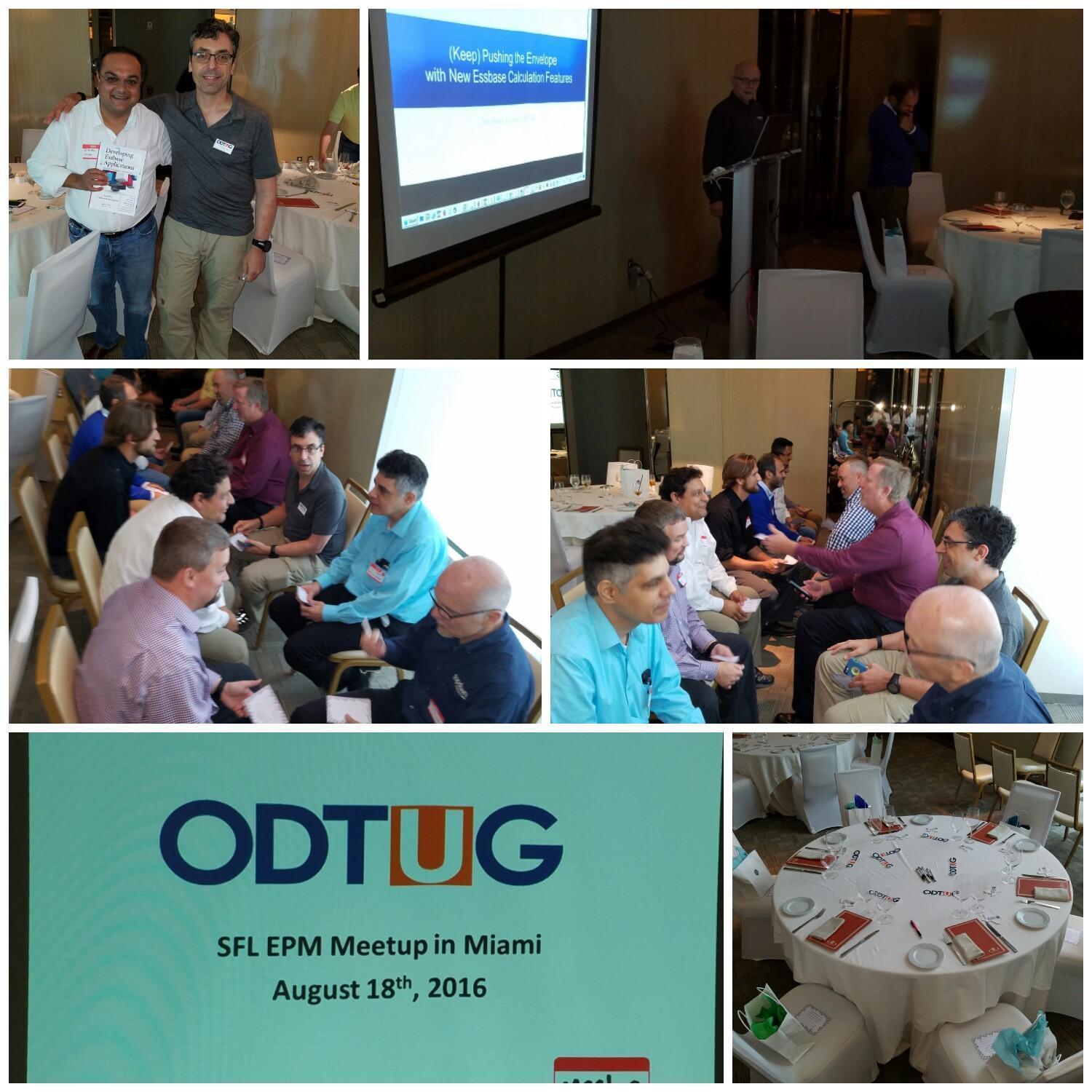 You’re going to be at the next one, right?


Or start up your own in your area if one doesn’t exist?  Right?  Why not?  Reach out to ODTUG and git a goin’.


Be seeing you.
Posted by Cameron Lackpour at 4:34 PM