This blog by the numbers

This blog in review

I’ve been writing, working, and in general sweating over this blog for almost five years.  That is sort of a shocking statistic, but I started in May 2009 and here we are at the beginning of 2014.  Okay, so sue me, four and a half years, not five.  It’s true, I promise you.  (You have to watch the link to get the sort-of joke.)  Fwiw, I can’t decide if Frank Sinatra (Nathan Detroit) or Vivian Blaine (Adelaide) is the better in this scene.

That is a sobering amount of time and effort to apply to one project, especially an unpaid one.  Why do it?  Indeed why?

At the risk of sounding maudlin, I do it for three reasons, in order of decreasing selfishness:

And that, really, is what this blog post is about – you:  where you come from, how you get here, and what you care about.  I am no mind reader, but instead a devotee of Google Analytics (GA).  Surely all EPM devotees are interested in analytics.  This bit of blog-based navel gazing is more than mere indulgence but is instead a view into what the EPM world cares about, circa 2013.

A bit of sobering information

You’re about to see lots of numbers, and think, “Wow, Cameron sure is full of himself, bragging about how popular his work is.”  Lest you think this, know that once upon a not too distant ODTUG board meeting, we bloggers were asked to reveal how popular our blogs were.  I was quite chuffed with my ~3,500/month visits.  I was however, mildly shattered when Tim Tow revealed that he got more than 17,000 per month.  Maybe Tim should do a post like this.  :)  I have no insight into other blogs like John Goodwin’s, or Glenn Schwartzberg’s, or Edward Roske’s, or whoever’s, but I imagine that their numbers dwarf mine.

Regardless, this is Cameron’s, Not Someone Else’s Blog For Essbase Hackers, so on with your numbers, courtesy of GA.

How many are you? 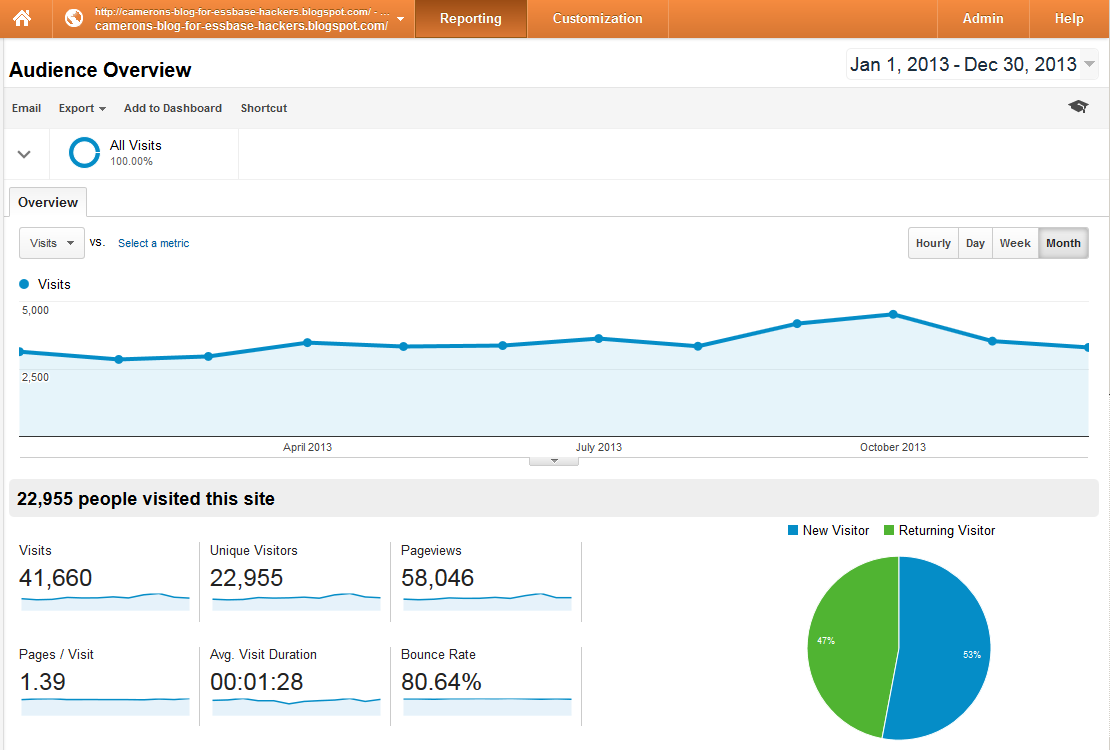 Depending on how you want to look at it, one could argue the blog is up about a third in visits, visitors, and page views. 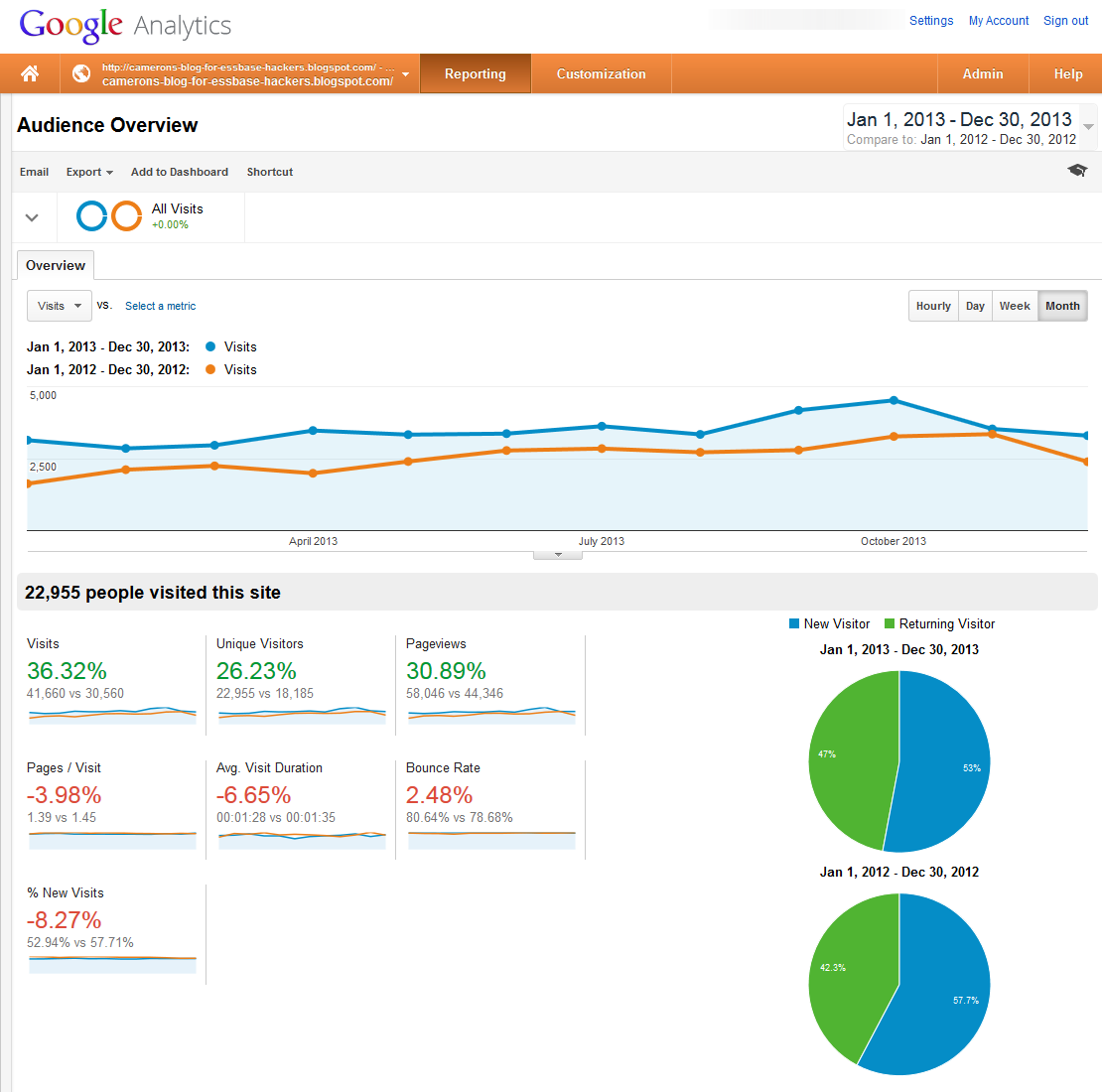 How many of you have read this blog from its inception?  Just under 60,000, according to GA.  You can see how the audience growth really hit its stride in 2012. 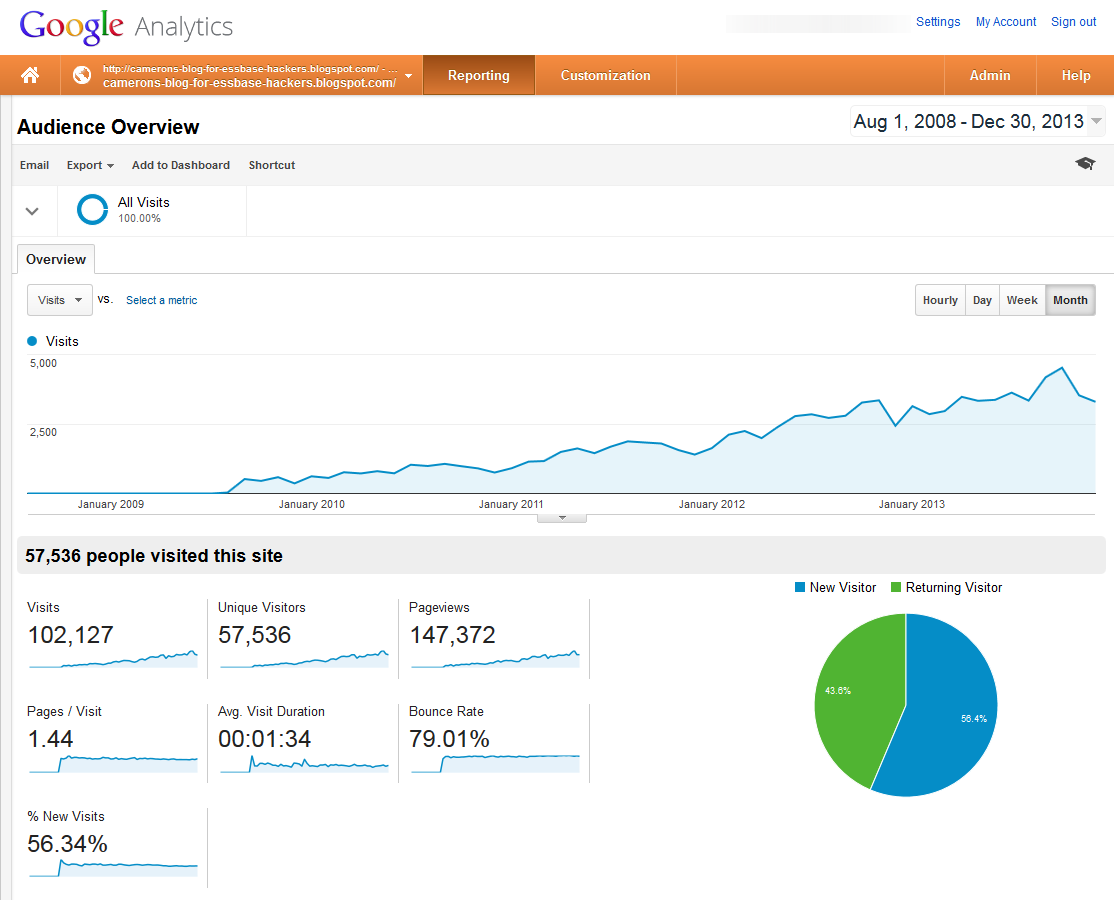 For giggles, I like to look at BlogSpot’s own numbers which show “better” values.  Alas, the difference in data is due to all of the automated web crawlers that search for content.  GA is able to filter that out, hence the lower numbers.

Regardless, there’s a lot of you reading this blog, for which I am thankful.

Where are you from?

All over the world, actually.  Not all that surprisingly, the United States is my primary audience.  India, given its population and IT presence, is also not a shock.  I am pleased that my (distant) cousins in the United Kingdom are number three and am amazed at Australia’s high rankings, although I have to put that down to my ODTUG Seriously Practical conference. 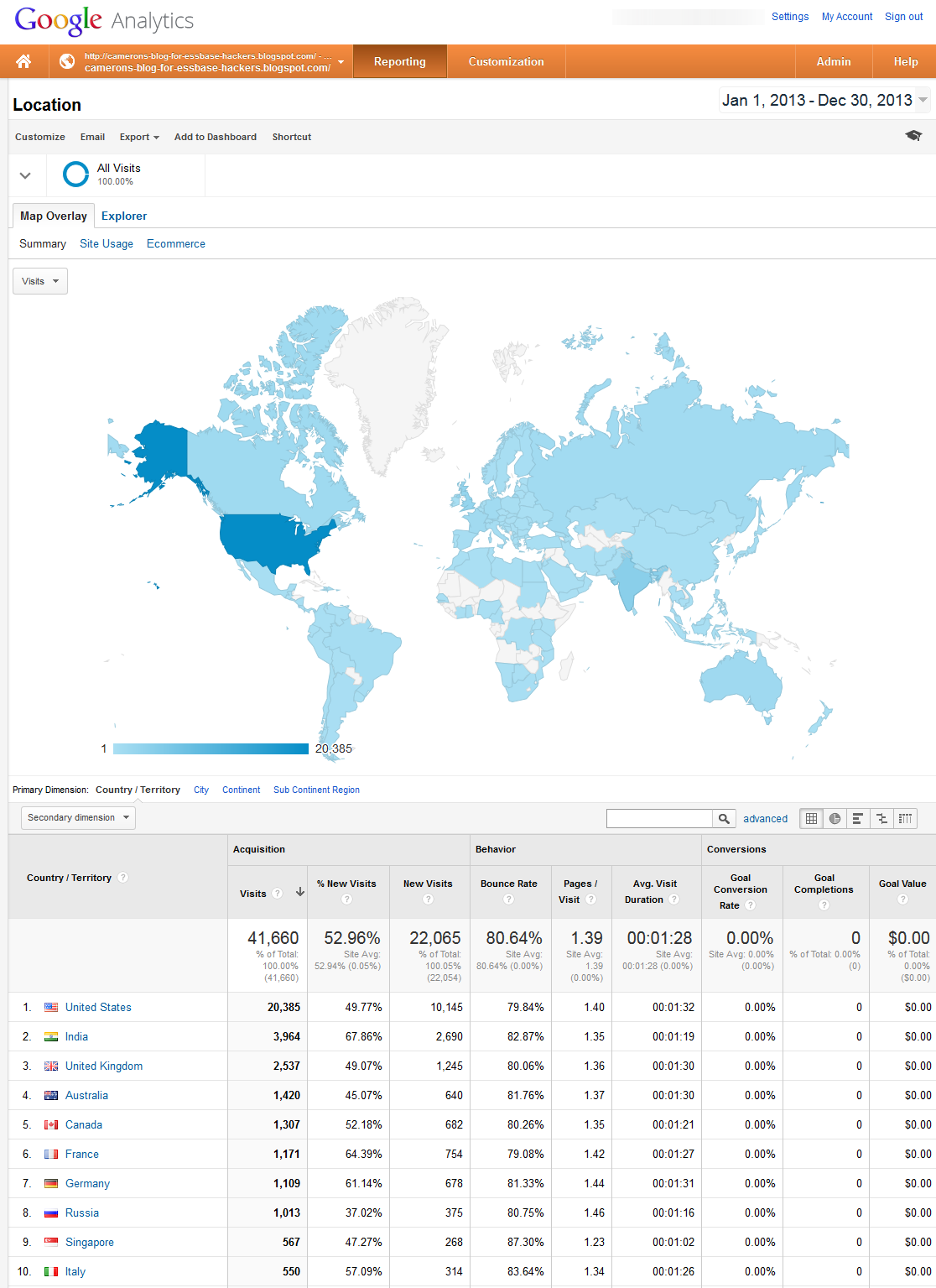 You can see that although the absolute numbers in the US are higher, the blog is becoming more international in its readership as the States are actualy just over 2% down as a percentage of total readers.

Otherwise, in the top 10 countries, it’s a case of growth, except for Italy.  I put that down to the economic disaster that is southern Europe. 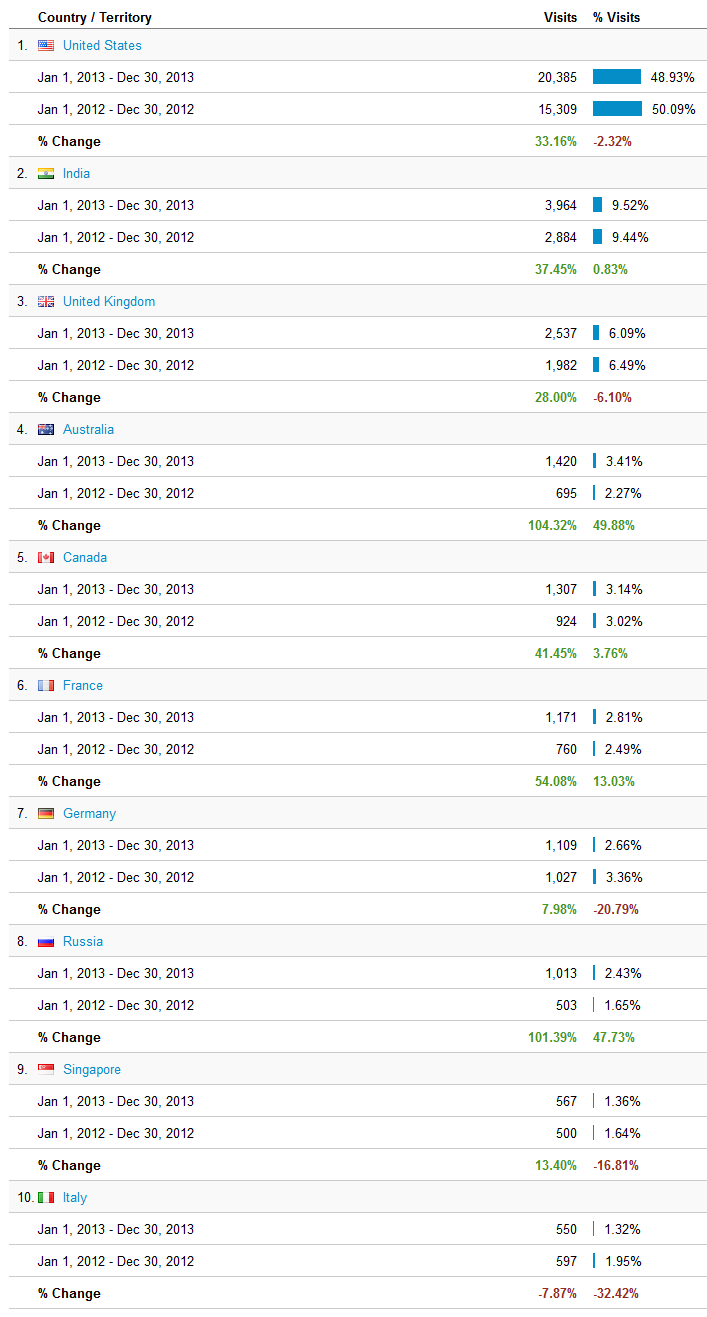 What’s up with Wyoming?  I guess cowboys don’t need Essbase.

Want to know where the most Essbase activity exists in the States?  Take a look at the top ten. 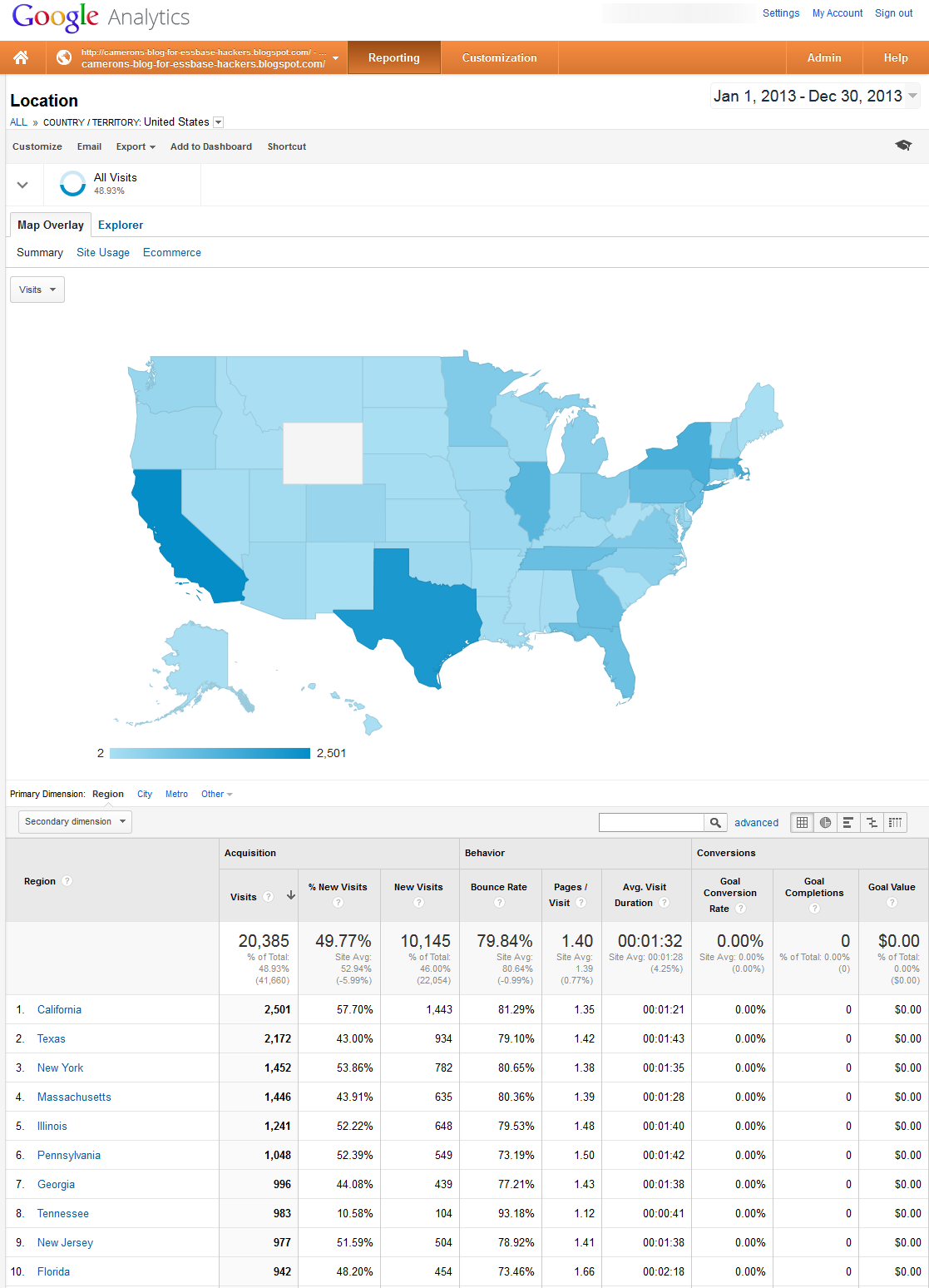 To be absolutely fair, I am not sure that the top ten stats really and truly are where the most Essbase activity exists as I seem to have consulted in most of those states at one time or another.  It could be a trailing effect (assuming that I do not leave my clients in a state of outrage) from me being there.

Also, it isn’t surprising that large populous states have a lot of readers but it is still interesting to see how the numbers fall out.

This blog was super popular in Tennessee, Florida, Georgia, and New Jersey.  The other top ten states saw growth, but not to the same level.  California was almost flat – hmm, what do I have to do to appeal to them? 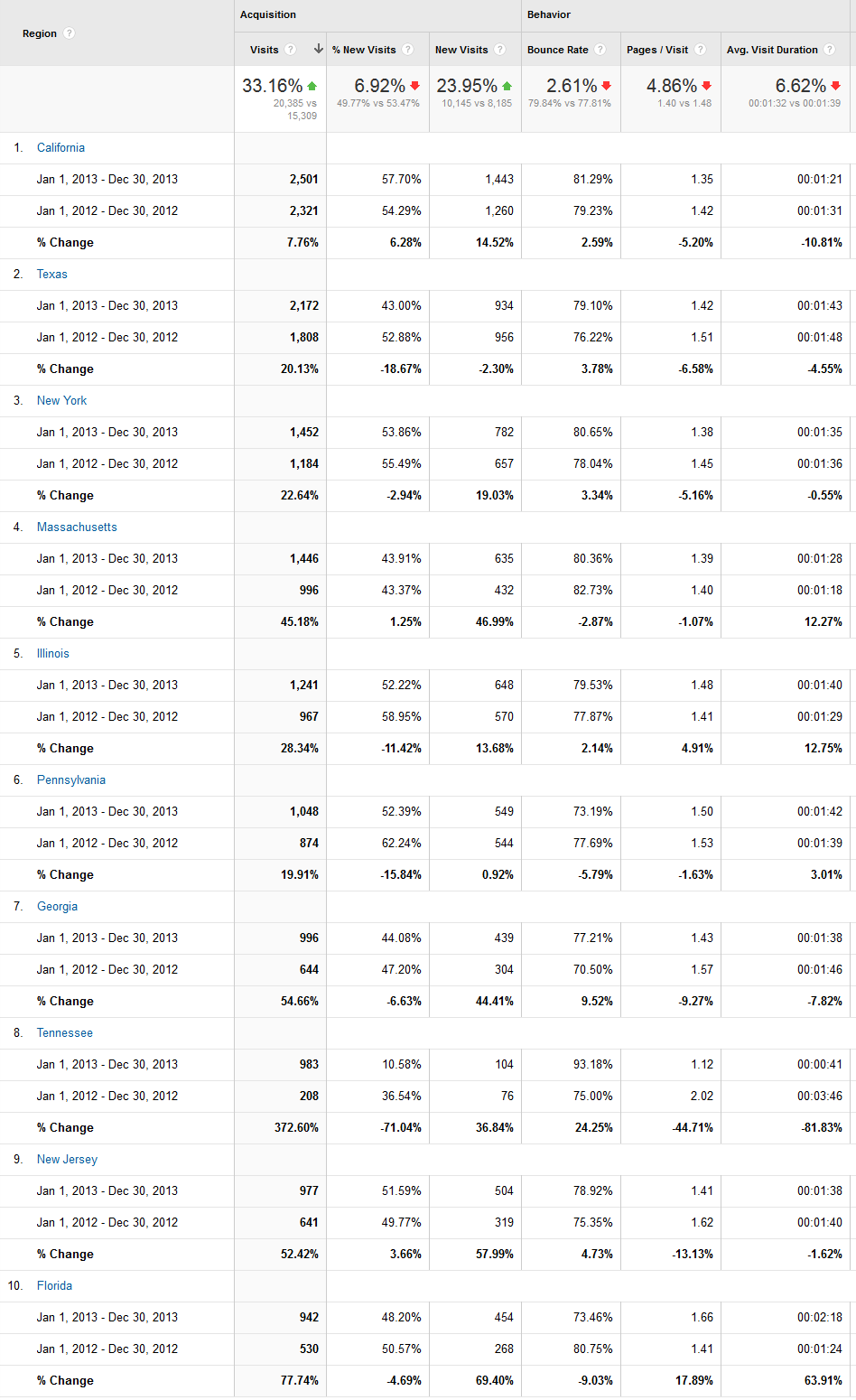 No, I can’t tell who you are, really, but I can tell (in aggregate) where you are from and your primary language.

This is primarily a US blog, so it is not a shock to see Comcast trump Verizon.

Individual corporations are harder to spot as so often they use the big providers (including the intriguingly named “Internet Service Provider” one).  It is kind of cool to see that Oracle reads this blog, if only to identify the mistakes and have a good laugh. 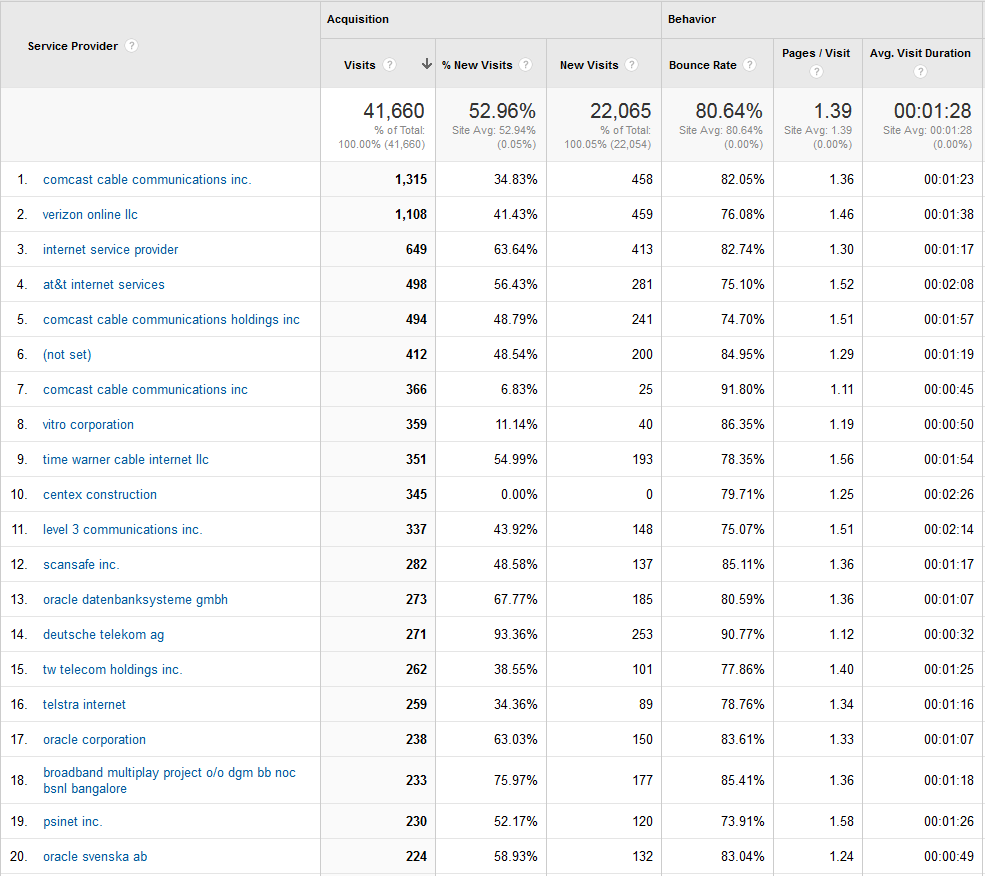 English (‘Murican and Queen’s Own), French, Spanish, Russian, German, and Portuguese (Brazilian) are the primary languages. 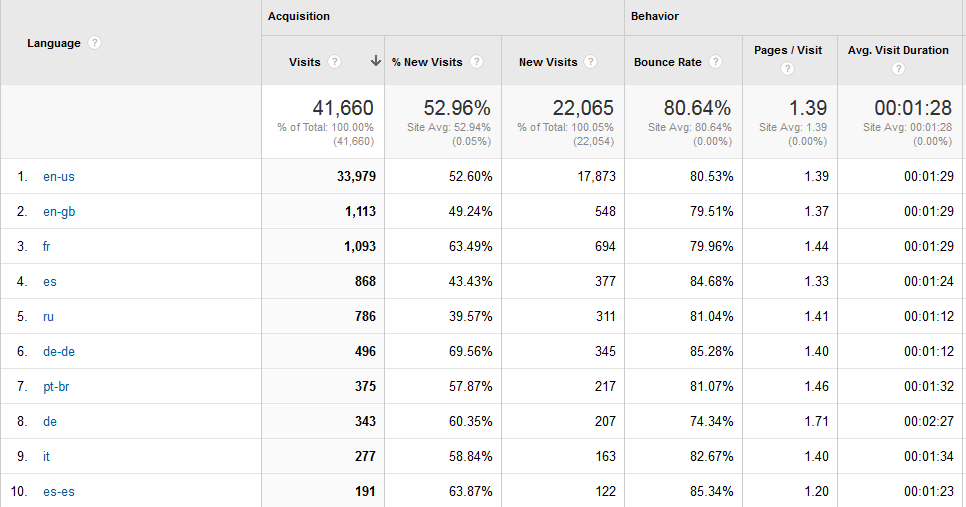 How did you get here?

Most of you came from Google, then bookmarks, then Bing (I am having visions of Bing Crosby doing one of his jazzier routines), and then blogs.

I find it interesting that Edward’s blog is ranked number five as it is (mostly) not updated very often.  Of course, when there is a new post, an awful lot of people read it, hence the high referral rate.  Or maybe they go there first, get disappointed at the lack of new content (Edward, can you tell I am beseeching you to write more?), and then in reluctance turn to my blog. 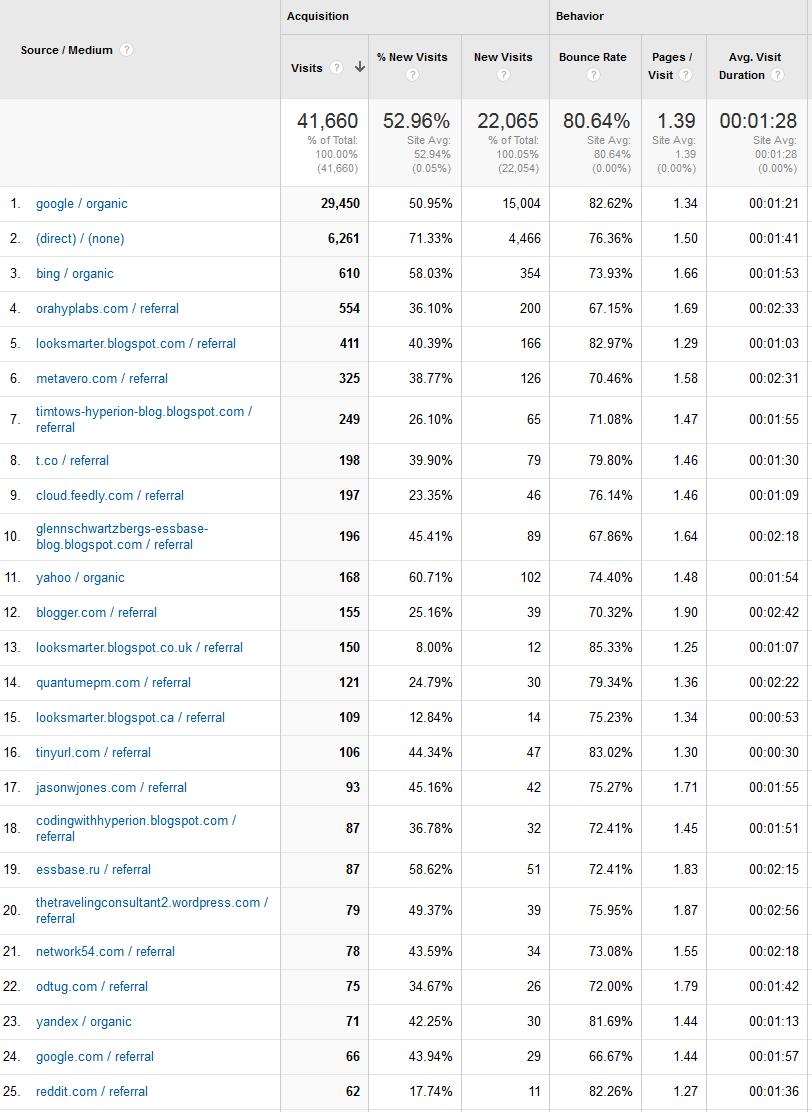 What do you use to read this blog?

The top ten are no great surprise.  Explorer continues as the corporate standard -- people who don’t work for corporations don’t much care for Essbase, as hard as that may be to believe.  As a Firefox fan, I am surprised at Chrome’s second place finish.  I love the many add-ons that Firefox allows and as far as I can tell, Chrome is a take-it-or-leave-it proposition.  To each his own, I suppose.

Not much of the readership is on mobile if I understand how browsers get reported.  Android devices pip Apple’s products, but just by a hair. 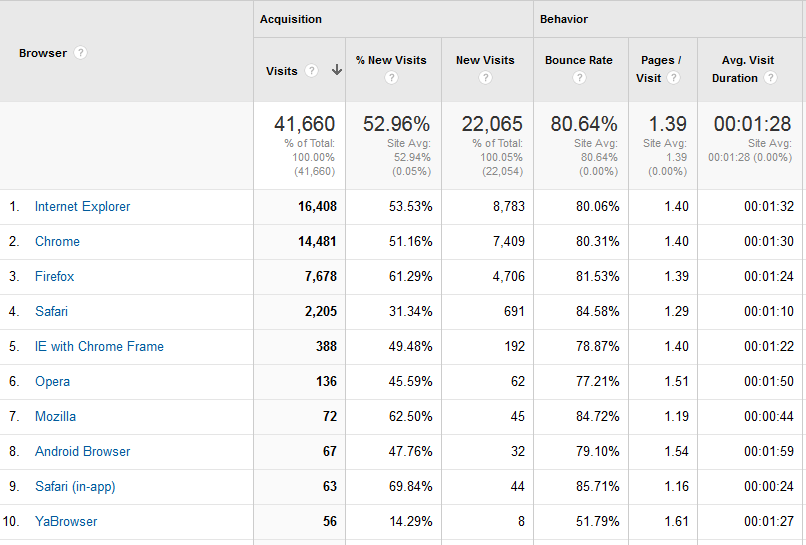 What do you care about?

Ah, here’s the interesting bit.  Other than the first entry, which represents this blog’s home page, I can tell that in 2013 you cared about: 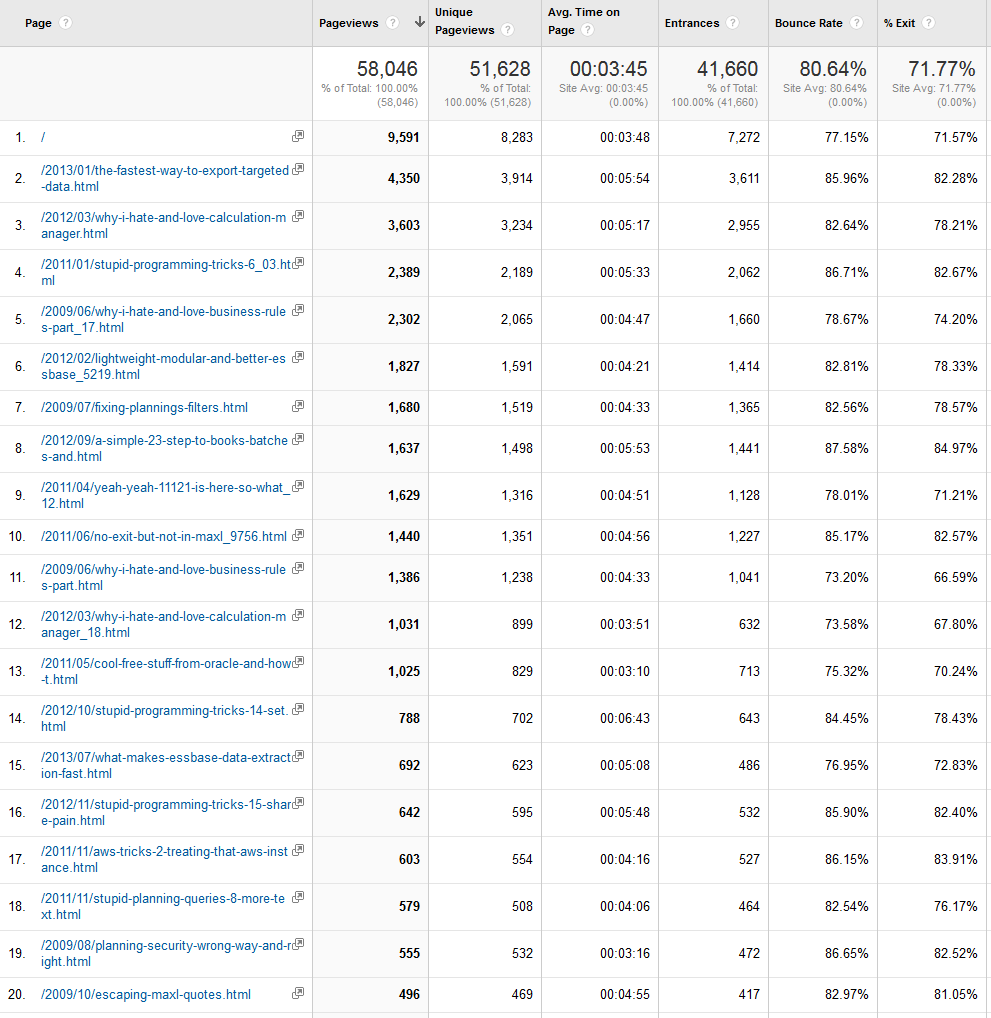 If you look at the year of the post, you’ll see that of the top 20, only one post, the on an undocumented MDX function called NONEMPTYBLOCK, came from 2013.  The rest of the entries are “famous” in that they answer perennial questions and thus get read a lot.  Note to self -- you must find more undocumented MDX keywords and blab about them to world+dog.

Where do we go from here?

The above is sort of like hitting you over the head with a spreadsheet.  Numbers yes, but what does it all mean?

I think this blog’s continued success, as borne out by the above data, mean a couple of things:

A slight change of emphasis

I do spend quite a bit thinking about what I write and even more time doing the writing.  I am very encouraged by your support of this blog and am committed to continuing its success.  In an attempt to have a life/be gainfully employed/do all of the other volunteer work I have purposely cut back a bit from the forums as I simply can’t do everything I want to do and do it at the same (at least to me) high level.

Don’t worry (or maybe rapture is the correct emotion if you are not a fan of my forum contributions), I will not be withdrawing from Network54/OTN by any means, but my day is 24 hours, just like yours, and I can’t create time where none exists.

More of the same, but better

With that in mind, what I can promise (I hope) is more of the deeply researched posts with the same attention to detail.  Yes, sometimes the posts will be slightly shorter (I have one on Excel coming up that isn’t very involved although it lost me an afternoon of my life trying to figure it out) and yes, the same linked references to things Not Oracle EPM will continue.  As always, don’t bother clicking if you don’t wish to, but I do hope that you too have interests outside of work, and that maybe you’ll share some of my admittedly odd interests.

Hopefully, this is the right thing to do

As Maurice Chevalier once sang in I’m Glad I’m Not Young Anymore, “I’ve never been so comfortable before”.  What do I mean by this?  No, I will not be starring in a Broadway revival of Gigi (the mind recoils).  Neither is Methuselah my patron saint.  But consistently writing this blog for so long has given me the perspective and confidence of hard data.  Experience does sometimes equal serenity and if I will never have the je ne sais quoi of Chevalier then at least I have the numbers as noted in the above sections that prove what I’m writing is useful to more than just me.

Maybe a slightly less cynical take on all of this is by Messrs. Armstrong, Crosby, Sinatra, and the exquisite Miss Lee in their opening for the 1959 Bing Crosby Oldsmobile Show (What, you can’t see me as a fan of Der Bingle?  It’s true, I promise you (to quote a song), as I have pretty much rejected all of American culture post-1965.).  This blog has been around, and perhaps its forevermore is shorter than before, but I’m glad it’s not young anymore because the best is yet to come.  Oh, the puns, they hurt.

It’s all about you

Something that we in the EPM world might forget is that numbers are meaningless without context, and in the case of this blog, that context is you.  I could write until the cows come home but if you didn’t read it, there wouldn’t be much point.

Be seeing you.
Posted by Cameron Lackpour at 6:34 AM

The fourth one (before Ed's) is mine, so you are saying that we should look into the content ;)

Your blog is active, so I was not surprised by the number of links from your blog (thank you, btw).

Edward's is largely quiescent, hence my surprise that it is still a source of a lot of traffic.

Cameron,
The only thing your blog is missing is bacon. Keep on blogging!

What I got from your blog about your blog? Wow, Google Analytics is really cool. Too bad OBIEE isn't this pretty/fast/easy to use/free.

Yes, Google Analytics are pretty awesome -- I have lost more than a few hours playing around with it and I only use a portion of the tool.

To be fair to OBIEE, I have no idea of what pains Google went through to provide all of the statistics (and I did just share a bit of it, so yes again on the awesomeness of GA), but one might guess it wasn't something they banged off on a keyboard over a couple of cups of coffee.

Pffff, reading the first lines, I got a feeling you wanted to quit....
Cameron, the numbers showing your success! And this is just the quantitative aspect. I think your blog will also rank very high when we had to vote on quality and amusement. Likely higher than Edward and Glenn.
Your style is great. We are your fans!

See I really did read the whole thing!

Your blog ia an asset and something I depend upon if for n o other reason that to improve my vocabulary to your sesquipedalian level.