If someone asks you to, “Name an animal with three letters in its name.” you must answer, “Frog”.  Or “Alligator”.

Alas, in my laziness I could not find a good clip of Richard Dawson (surely at his best as The Scrounger in that laff-a-minute gag fest aka Hogan's Heroes*) saying, “Survey says…” so you’re going to have to be satisfied with possibly-not-very-bright contestants in the section title link above.  Never worry, Gentle Reader, your answers are valuable to us all.


Way back when, seemingly forever ago but merely just before Oracle Open World 2016, Gary Adashek, John Booth, Natalie Delemar, and Yr. Hmbl. & Obt. Svt. asked you to comment on what you think of that oft-maligned but oh-so-necessary Excel (and other Office tools but they rarely seem to be used elsewhere) add-in, Smart View.


When the survey was announced on the Network54 Essbase board, we also said that sooner or later we’d release the results of the survey as shown below.  Sooner was quite a while ago; later is right now.  Sorry but I’ve been busy.


Here’s what the survey asked.

And the survey says

Of course Read The Whole Thing below but for those of you almost as lazy as I, here’s my take on the results.


NB – Where the survey provided a comment field, I’ve included all responses.

396 people responded to the survey.  That’s an awful lot of uptake for an on-line survey and proof if proof be needed that Smart View is important to all of us.

Here’s an interesting (or depressing depending on your age and boredom with your career) note:  more than half of the respondents have used Smart View for more than 10 years.  Oracle EPM users are long time users.

Again, the results confound me.  Do you really think that Smart View’s performance is acceptable?  There are times when Excel goes into “white out mode” on a large retrieve that makes me want to Be a Danger to Others, Be a Danger to Myself.  Ain’t nothing like explaining to a customer that yes, that Essbase database I created is really fast but Smart View blows its brains out when it retrieves 20,000 rows so no, this system isn’t any good.  Fun times, fun times but apparently I am alone in this.  Lucky you.

As someone who whines incessantly about Smart View’s shortcomings, I am somewhat discomfited to share that more people love it or at least like it than are fair to middling on Smart View.  That one was a surprise to me but as noted, I Am A Whiner.  Or a perfectionist.  Or both.

On this one I am in accord with the general public (so that’s at least one thing in my life where I barely line up with my peers – It’s Not Easy Being Green) in that Essbase and Planning are the top use cases for Smart View.  I note with interest that there are users of Oracle GL out there.  Given that Oracle GL analysis sits on Essbase (yes, it does – there’s a headless ASO database under the covers), I guess I shouldn’t be too surprised but this blog isn’t exactly aimed at ERP users.  I can only surmise that there are some who use Smart View for the more traditional EPM/BI data sources.


I can tell you that of the two users of the Oracle GL they also use Essbase, Planning, FR, and HSF.  So yes, a comprehensive suite of Oracle products.  Somewhere there’s a happy Oracle sales rep or two.

As might be imagined, ad-hoc and forms are the primary use cases for Smart View.


Of note, Smart Queries and Smart Slices are used far more than I would have guessed.  I have never, and I mean never, seen either feature in use at my clients.  I can only attribute that to:  me completely not seeing what’s in use (likely), working with net new clients and so they haven’t gotten to the more advanced features yet (also quite likely), or blind prejudice on my part (they’re both intriguing but incomplete functions) makes me not see them (also quite likely).  Regardless, they are in use.

Read the comments and see if they jibe with yours.  The more critical (and funny) ones seem to be from those who have issues with the tool.  For your amusement, here are some of the best.

How would you rate Smart View?

How do you find the performance of Smart View?

What Smart View features do you use?

On with the numbers

Presented without further comment, below are the numbers as reported by SurveyMonkey.  Read ‘em and weep.  Oops, that was a comment.  Sawry.

Q1 – How long have you been using Hyperion or Oracle BI 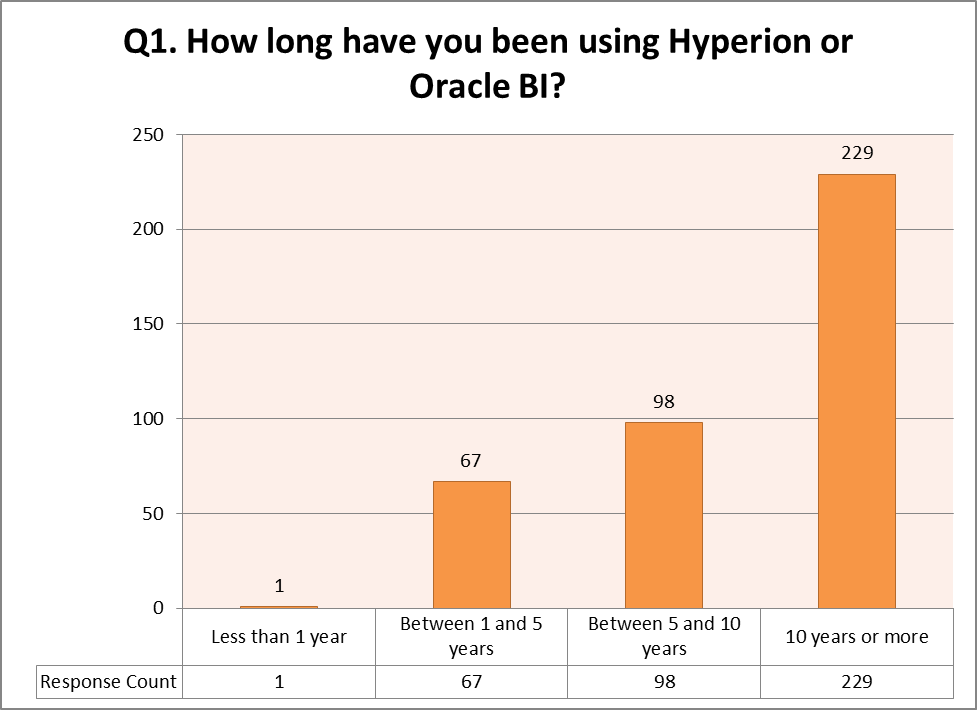 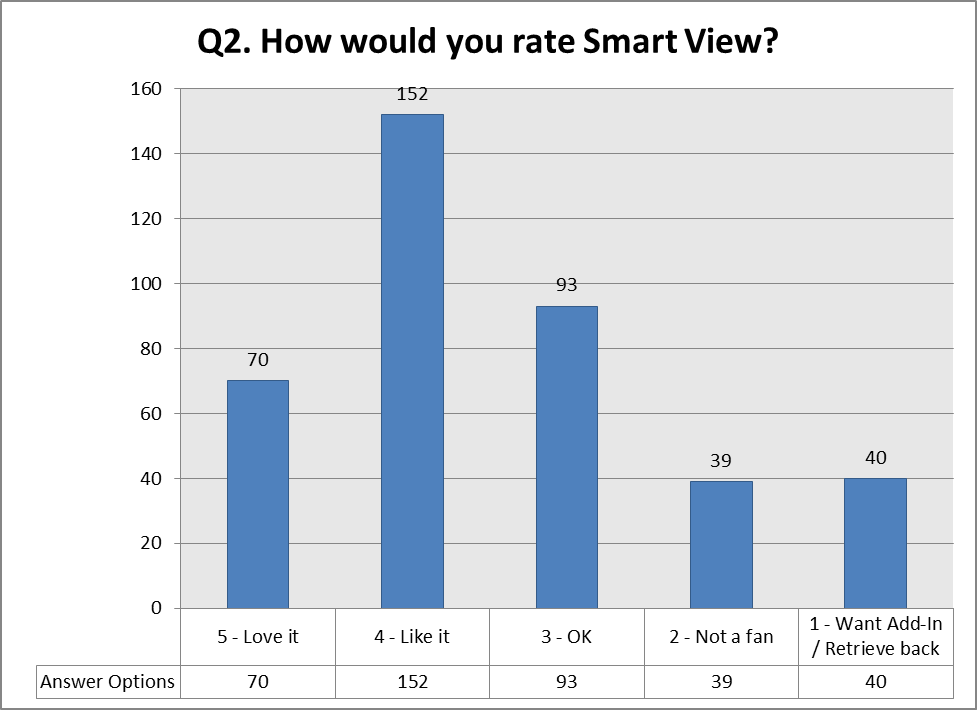 Q3 – How do you find the performance of Smart View? 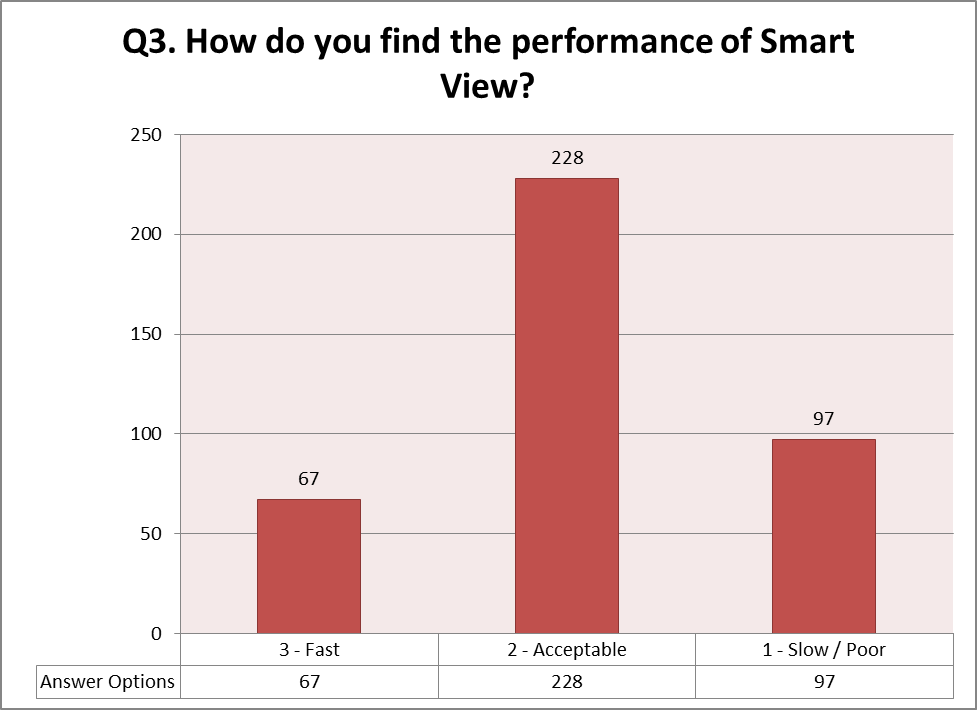 Q4 -- Which products do you use with Smart View? 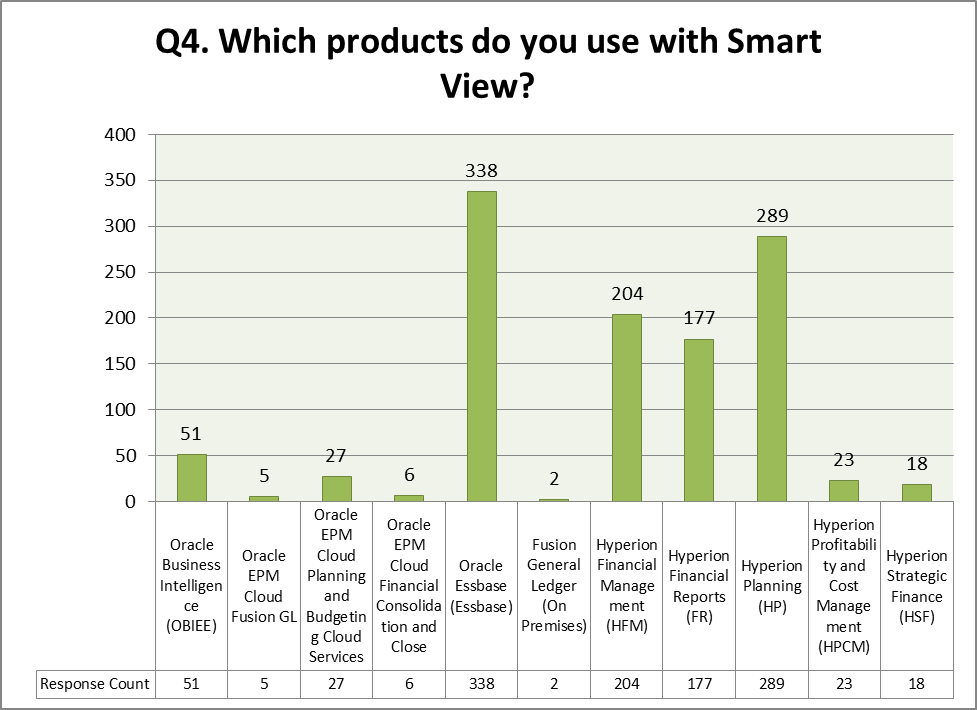 Q5 -- What Smart View features do you use? 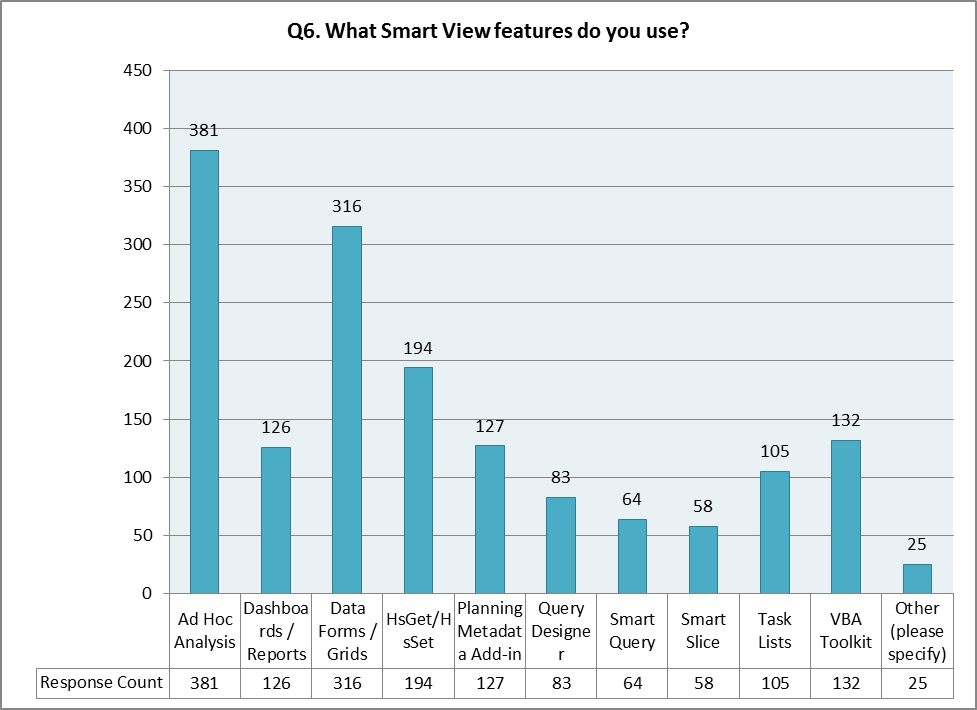 Well there you have it

To everyone who responded to the survey, thank you from John, Natalie, and myself.  The somewhat-humorous definitely-snarky comments are mine, not theirs.


We presented the results of this survey at Open World.  There was much head nodding and “Hmmm”ing which I take to mean that many of these issues are known to Oracle.  The cynic/idealist in me wonders why they haven’t fixed each and every one of the problems, the realist in me notes that actually there are an awful lot of people who like Smart View so maybe things aren’t as bad as thought.


As always, there’s a comment section in this blog (see below).  Please let us know your thoughts.  The comments can be anonymous or, if you’re foolhardily brave, with your own name.  Oracle does read this blog (oh, how I pity them) so your comments will be read.

* One might argue that Richard Dawson was at his best in Hogan’s Heroes but that’s only in comparison to Family Feud.  If you want to watch a good war movie about the not so fun life of a PW, watch Billy Wilder’s Stalag 17.  Any movie with Otto Preminger, William Holden, and Peter Graves has to be brilliant.  I love the line about the curtains.


If you’re looking for something in color, see The Great Escape.  To name just a few of the stars:  Richard Attenborough Steve McQueen, Donald Pleasance, David McCallum,  and of course James Garner as The Original (movie edition) Scrounger.


And when watching The Great Escape, ask yourself:  if you needed a Scrounger, is Richard Dawson as Cpl. Peter Newkirk your choice? 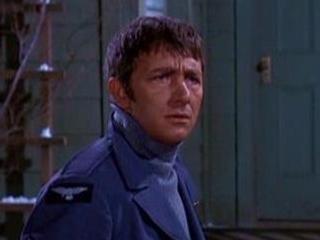 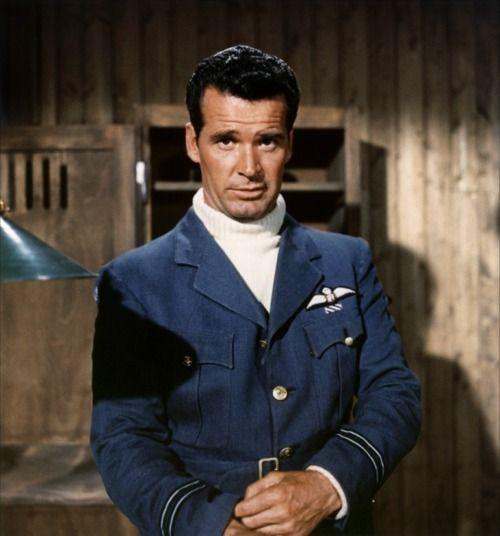 
If you really want to watch a brilliant film on the escape from Stalag Luft III you simply must watch The Wooden Horse.  You can watch bits of it here.  The book’s not half bad as well.


Do as Sgt. Schulz says and see nothing to do with that TV show.


I’ll be seeing you even if Sgt. Schulz won’t.
Posted by Cameron Lackpour at 10:23 AM

Since you need to have Smart View in order to use PBCS with MS Office, hoping they could add Multi Grid (since it's a Planning connection) and speed up large retrieves/submits (maybe a "traditional" option that goes through APS and the normal Start/End Period, other Planning validations + a "direct" option that acts more like a direct EAI Essbase connection only for pulls & without the APS connection and validations).

While agree EAI has lots of benefits, IT hates it because it keeps the FPA group off of 64-bit Office, Office 2013/2016/future versions, etc. Feel like Oracle will be pulling the rug from under EAI shops as well by essentially disabling it with future on-prem versions.

Thank you Cameron for doing this survey and distributing the results. Here are a couple of my thoughts...

The almost 400 respondents use SV for a long time, on many different products and all product features. Also from the comments we can conclude that they know what they are talking about.

Less than a quarter love it. This is rather low for the major front end tool on EPM.

Cameron, you are surprised about the high number of answers that rate the performance as acceptable. Like the header "speed is good" the answer is showing no real satisfaction. When users are asked what is important then retrieval performance is always in the top-5. Also not everybody looks at the server log to see how fast Essbase gave the answer. Is there a way to track the lag between response time in SV and Essbase? Would be interesting, maybe there is much more to tune on that side as well.

SV is coming from far and it has improved a lot. As it is the most important front end tool provided, it should become much better. A front end tool is the major interface with the customer.

Regarding performance, if you have the option enabled for 'move formatting on operations' (or whatever it's called), performance is crushed!

I will never understand why when so many customers still complain about Smart View, and want the Add-In back and supported, and Oracle pretty much says, "nope, Smart View has reached parity, it's just as good. You're all wrong, and we're right."

I get that SV uses TCPIP (which cannot connect to cloud services over HTTP), but that's a pretty weak excuse, IMO, because it couldn't be that difficult to recode the network protocol layer.

I agree with everything you say. But it could be worse: try Planning ad-hoc vs. Essbase and you'll learn to love SV's Essbase connection.

One correction I think: It's not SV that uses TCPIP but the add-in. As to it being possible to mimic the add-in's functionality, look no further than Applied OLAP's Essbase add-in which is http/Java all the way.