For the love of Mike

I just wrestled with an Essbase calc script that humbled me because:  I couldn’t figure the !#$%ing thing out and I already dealt with this FOUR YEARS AGO (just about) in November 2012.  And I forgot that I did.  And I found out only when I searched for it on the web.  How embarrassing on several levels.  I am however happy to relate that I did figure this out (hence this post) and would ask you what exactly you were doing professionally four years ago.  Share your immediately referenced memories with me care of this site and please include estimated time between the previous sentence and recollection. 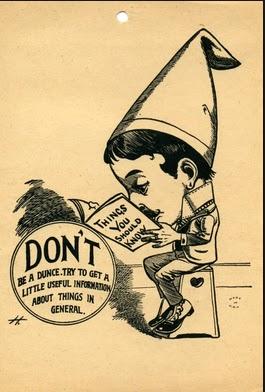 So what didn’t work?

As I wrote back in Stupid Programming Tricks No. 15 @SHARE the pain with FIX, there is a bug (feature?) with FIX statements when allied to @REMOVE and shared member hierarchies.  To wit:  @REMOVEing shared members from within a FIX simply doesn’t work.

To recap, here is Good Old Sample Basic aka MVFEDITWWW completely cleared out: 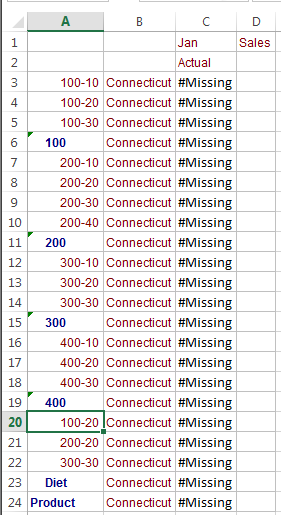 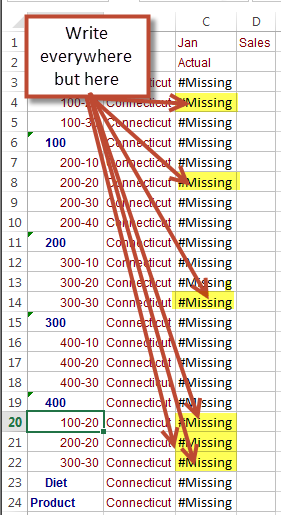 One would think using FIX, @REMOVE, and @RELATIVE as follows would provide the desired result.  The idea being that if I use a @REMOVE function to remove the leaf Diet members – which are all shared – I will write to everything but 100-20, 200-20, and 300-30.  I will be disappointed.

By disappointed I mean this: 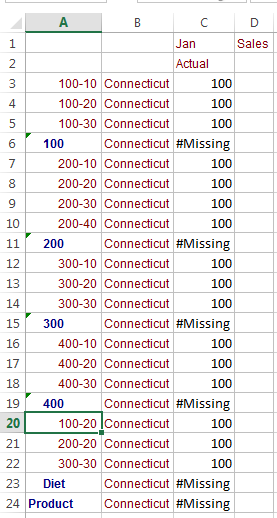 Ah.  That isn’t exactly what I wanted:  Essbase just wrote everywhere.  What went wrong other than it obviously isn’t working?

Why it went pear shaped

Rahul S. figured this out in his blog post FIX, REMOVE, and CLEARBLOCK, You may end up with No data ;).  Essentially (basically?) trying to remove shared members from a FIX statement using @RELATIVE results in a union of the two halves of the statement, i.e:  FIX(@REMOVE(@RELATIVE("Product", 0), @RELATIVE("Diet", 0)).  The first @RELATIVE selects all of the level 0 descendants of Product, the second @RELATIVE selects the shared 100-20, 200-20, and 300-30.  When these two @RELATIVE functions are surrounded by the @REMOVE the second set is removed from the first and then unioned with the now-reduced first set.  In other words, the shared members are removed and then they are added back in.  Go Read The Whole Thing but at the end you’ll join me in a despairing “Bugger”.  Double Bugger because this isn’t in any way, shape, manner, or form how Essbase deals with @REMOVE when the scope doesn’t address shared members; that works exactly as expected.  Triple Bugger.

As I noted in my blog post four years ago, there are three ways round this:

I’m rejecting all three approaches on the grounds of OMG-you-have-to-be-kidding-me (do I really need to detail why doing this for three members is annoying but for 30 or 120 is utter madness?), OMG-this-is-redundant, and OMG-it-doesn’t-freaking-work. 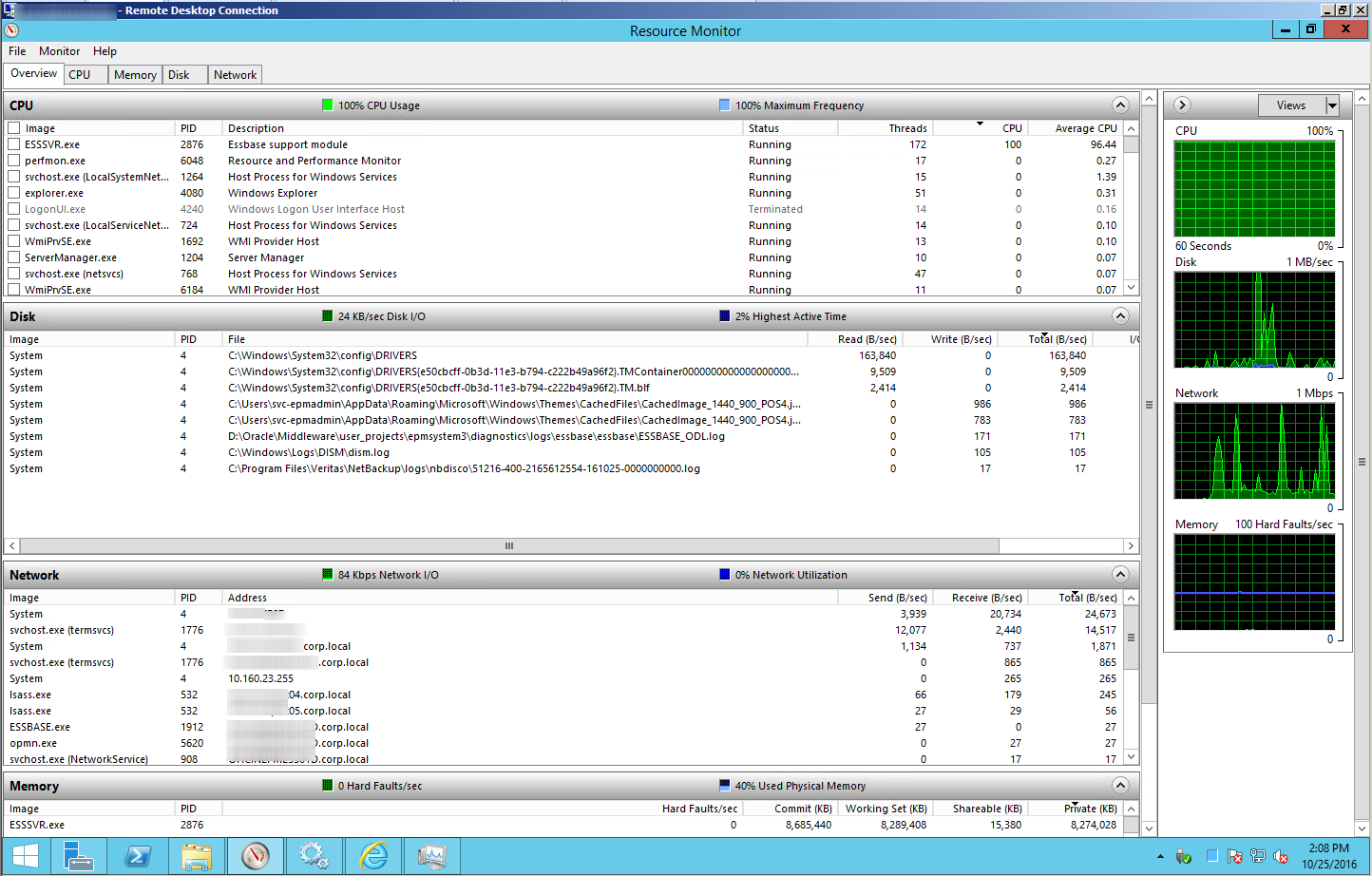 Full system utilization or crap code?  I vote for the latter and the blame is squarely laid at the feet of EXCLUDE.  Oh EXCLUDE..ENDEXCLUDE, don’t you know you’ve broken my heart?  Such wasted promise.

So what are my choices?

Fix it or ignore it

It occurred to me that if FIX was the issue, there might be another way to address members.  Of course there is but it is not typically used in the context of selecting sparse members:  I am speaking of an IF formula in a calculation block.  Before you start with, “Always FIX on sparse, IF on dense” I’m here to tell you that particular rule of thumb sucks eggs.  The only things that matter are:  does it work and the how does it perform.  The latter measure in BSO is always driven by the number of blocks accessed (assuming EXCLUDE..ENDEXCLUDE isn’t driving you round the bend).  Fast code that doesn’t work is trumped by maybe-slightly-slower code that does.

Let’s look at my “wrong” code: 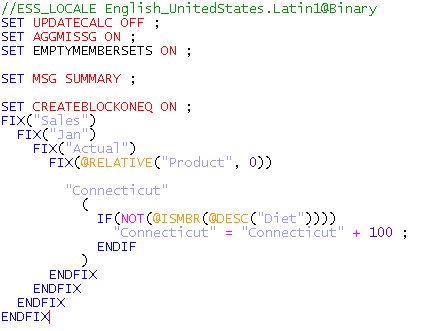 The code still focuses on level 0 members of Product but instead of using FIX to identify members in the Diet hieararchy I’ve used an outline test to see if a member is a descendant of Diet or not.  To that point about an IF statement on sparse being bad by addressing every block without constraint this code doesn’t allow that because the containing FIX on level 0 Product defines the absolute limit of members to be tested; the IF statement just performs an outline query within that FIX.

And what do we get? 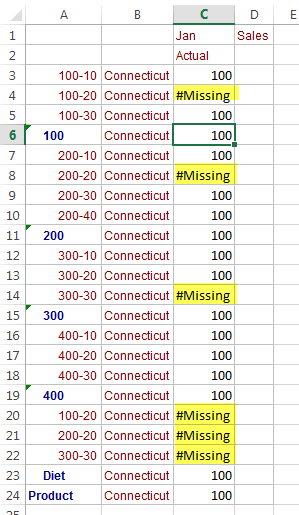 Ah, relief.  This really does the trick:  exclude the shared members within the hierarchy Diet from operations against the overall hierarchy of Product.

Sample.Basic is one thing.  What about a real database?  I am happy to share that it is fast as it doesn’t significantly address more blocks than the hoped-for @REMOVE statement would.  Yes, it is arguable that FIXing on everything and then testing for inclusion in a shared hierarchy is slower than never touching that hierarchy’s members but cf. that comment about fast code that doesn’t work.

What, if anything, have we (I) learnt?

Also, I have solved this !@$%ing problem.  And closed down one of my more painful Stupid Trick posts.

Be seeing you.
Posted by Cameron Lackpour at 9:48 AM

I hate it when I realize I am tackling the same problem years later. I like to think I would remember that stuff. I've started creating little files in Google Docs where I save examples of code that have annoyed me.

While I tell people the ol' FIX/IF rule, I don't always follow it. There's an "it depends" that I don't share with noobies. I like to think about it from the standpoint of how many of the members in the FIX do I expect to actually need to touch. If I plan on touching/changing 100% (or almost 100%) of the blocks identified in the FIX then I don't usually care if it is a dense or sparse dimension. This has become more and more my MO now that we can use THREADVAR/FIXPARALLEL to simplify complex (nested) IF statements.

we all go through this pain. Thanks for the post. would it not have been better to use "Actual" instead of Connecticut for your block statement, I'm sure there are less members in scenario than in market and you would be doing a dense calculation

Isn't Actual (strangely but not really to get the account dimension calcing right as I recall) dense? I'd then have block creation issues. The use of a sparse member such as Connecticut causes the blocks to be created.

Sorry, I should note that while I have SET CREATEBLOCKONEQ ON in the code, that's no long necessary as several have documented. Old habits die hard.

No, sorry, I did not try @LEVMBRS. Is there some reason you'd expect it to differ? From my experience, @LEVMBRS and @RELATIVE behave identically.

i am always use @merge and if , and only your this post open my mind why @remove don't work as i expected )))

@RELATIVE will give you more flexibility in the long run. Also, by always using @RELATIVE it is one fewer command to explain to the client. I use @RELATIVE whenever I can so that I can isolate to a small portion of a database for testing/debugging. In Planning applications, this is something that one will take advantage of for business rules that have run time prompts. You can't isolate to a subset of Lev0 members using the @LEVMBRS command. $0.02

Hi Cameron, i have a calc that i cannot figure out how to get it to work. I need all levmbrs of (org unit,2) to equal the value on the first child with data

I need orglvl2 to =10 not 20 and i cant specify specifc members do to size of all the dimension involved.
Any ideas? I tried to agg using fixed and excludes but level 2 still just aggs all children