The Compleat Idiot’s Guide to PBCS, No. 1 – Documentation

No, this isn’t my series on Volkswagens

Although I do come from a family members who were smart/crazy enough to own a 1953 VW Zwitter Bug (so long ago the color is unknown, but probably white), a 1966 and 1971 Squareback (a combination of awesome and rust and occasional fires but overall awesome), and a 1976 Dasher Wagon (apparently such a lemon no one actually seems to have a video of it and this snap doesn’t share the horrific 70s brown color), I am without doubt a Compleat Idiot when it comes to Planning Budgeting and Cloud Service.


My goal with this series, so long as I have access to a PBCS instance, is to bring the non-PBCS customer and consultant along with me as I explore the tool and compare and contrast it to on-premises Planning.


Fwiw, I don’t think on-premises is going away any time soon, but PBCS is the vanguard of Planning functionality.  See it in PBCS and soon (hopefully) it’ll be there on-premises.  Looking at PBCS is a time machine into the future for us in on-premises land.

Reading all about it

The first and most obvious place, even for we geeks who think we know Planning is the documentation.  Yeah, yeah, I know, real geeks don’t read the docs but I’ve learnt to do it because I’ve been burnt too many times, cf this post on security within dimensions.  Also, without the Tech Ref I think my career would be over.  There are gems in the docs if you know where to look.


That’s probably my greatest complaint about EPM documentation.  How do I know where to look?  Why does the documentation (I’m looking at you, DBAG.) look like it’s a refugee from 1994?  As an example, the DBAG really hasn’t changed much since I first laid eyes on it last century and is still strangely BSO-oriented.  I like BSO.  In fact I love BSO.  Within Planning, it’s where I earn my living.  But where’s the detail on ASO?  There is one chapter on ASO in the DBAG.  One.  Hybrid?  514 words. Rant over.


Planning isn’t much better.  Except it is in PBCS.   Oracle have taken a very different and welcome approach to documentation.  The key differences are organization and the tutorial orientation. 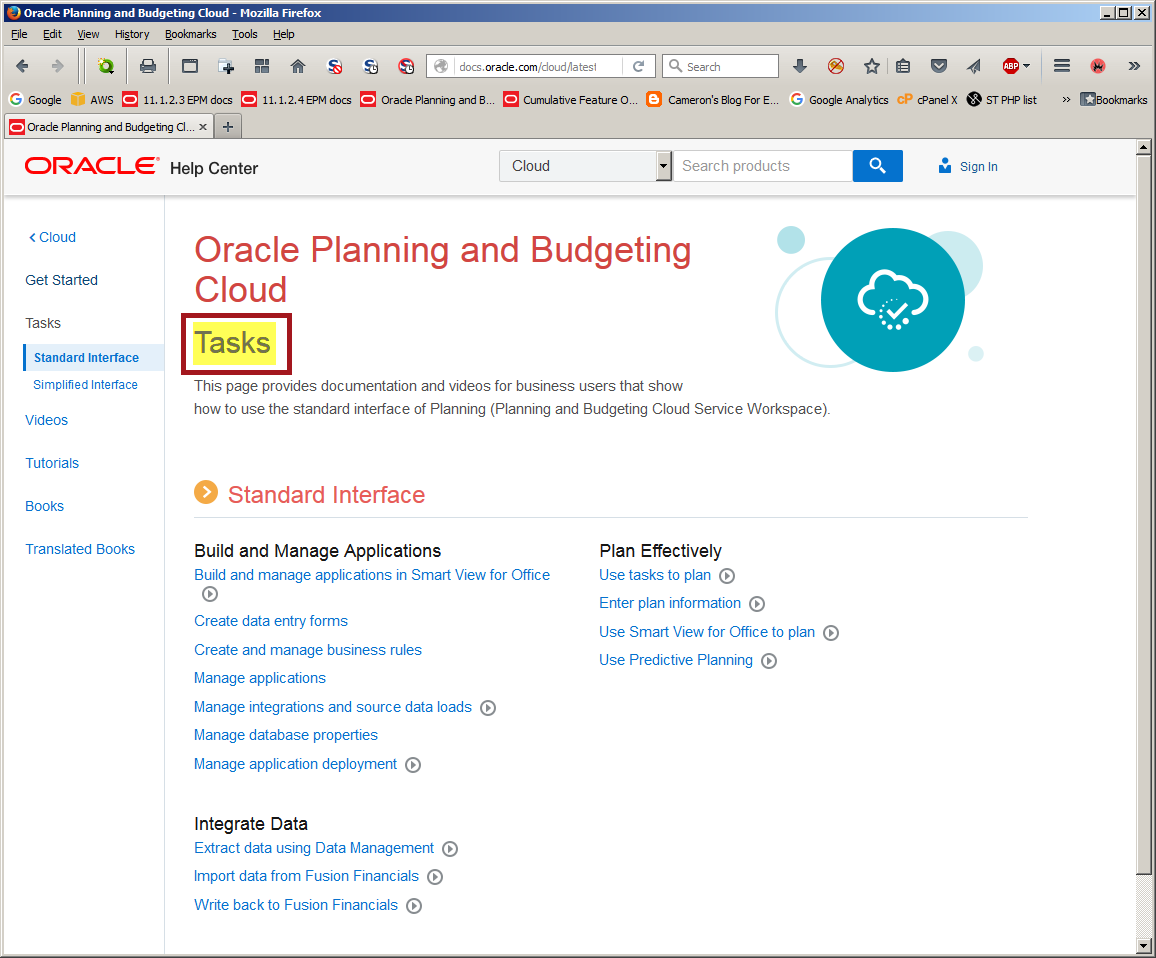 And the simplified interface.  Again, Tasks are the focus. 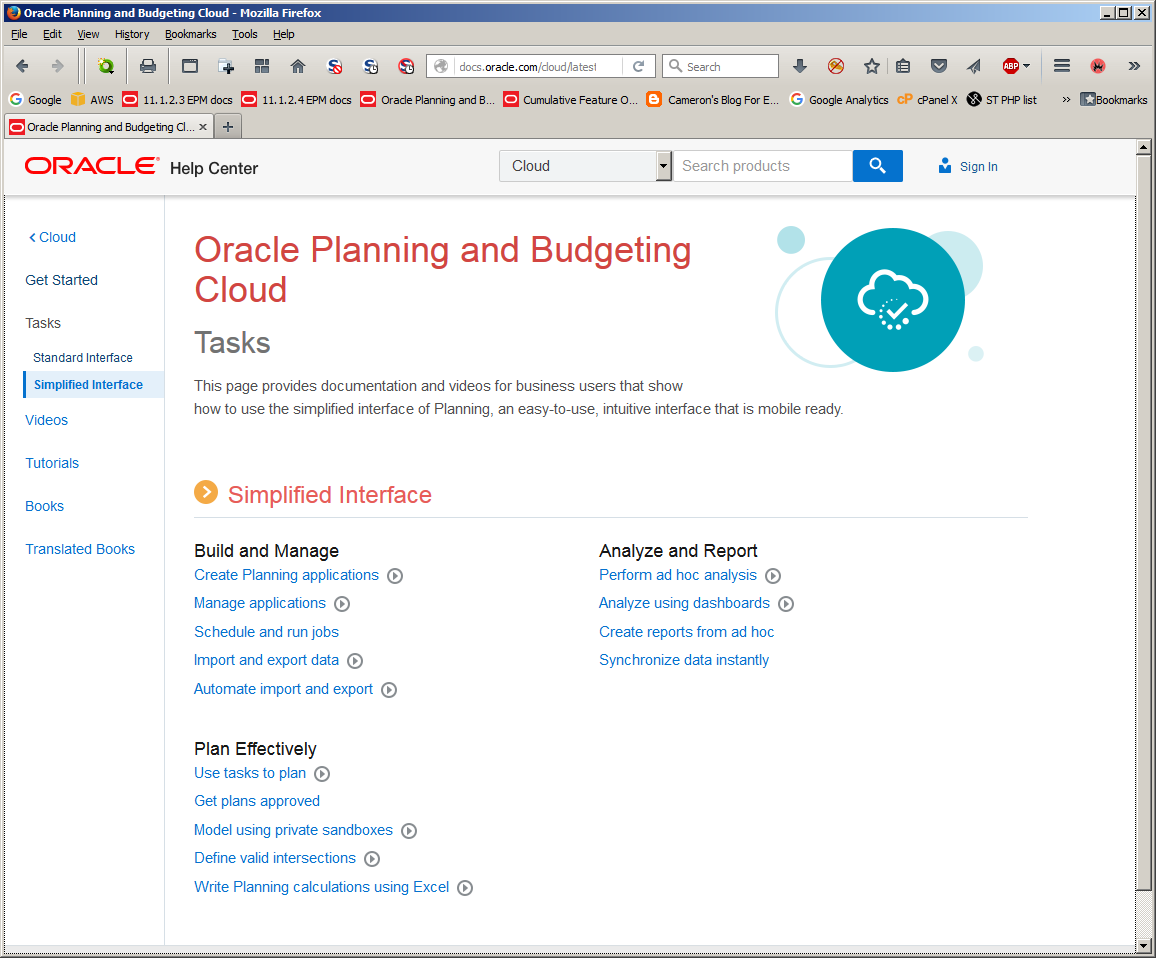 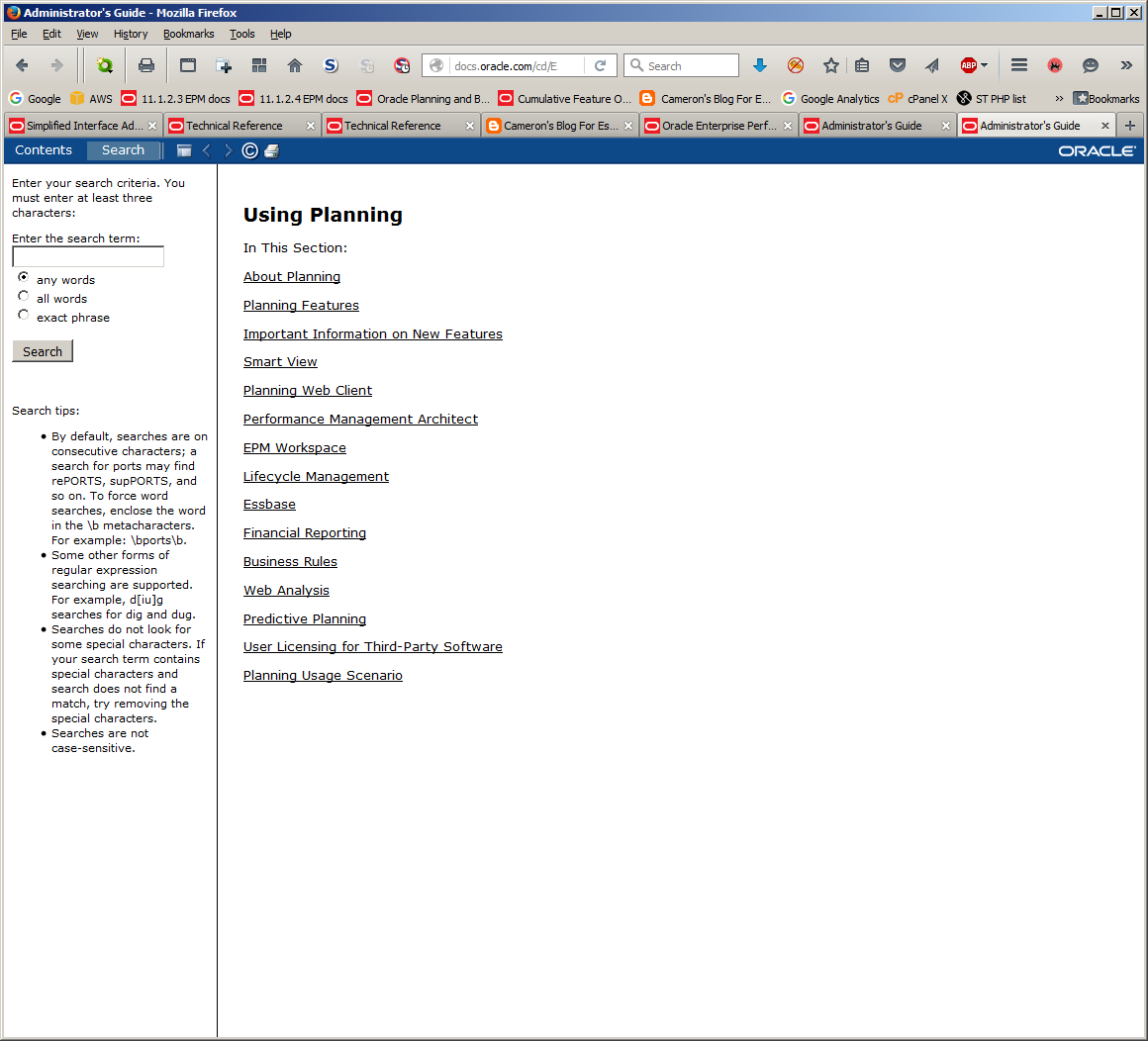 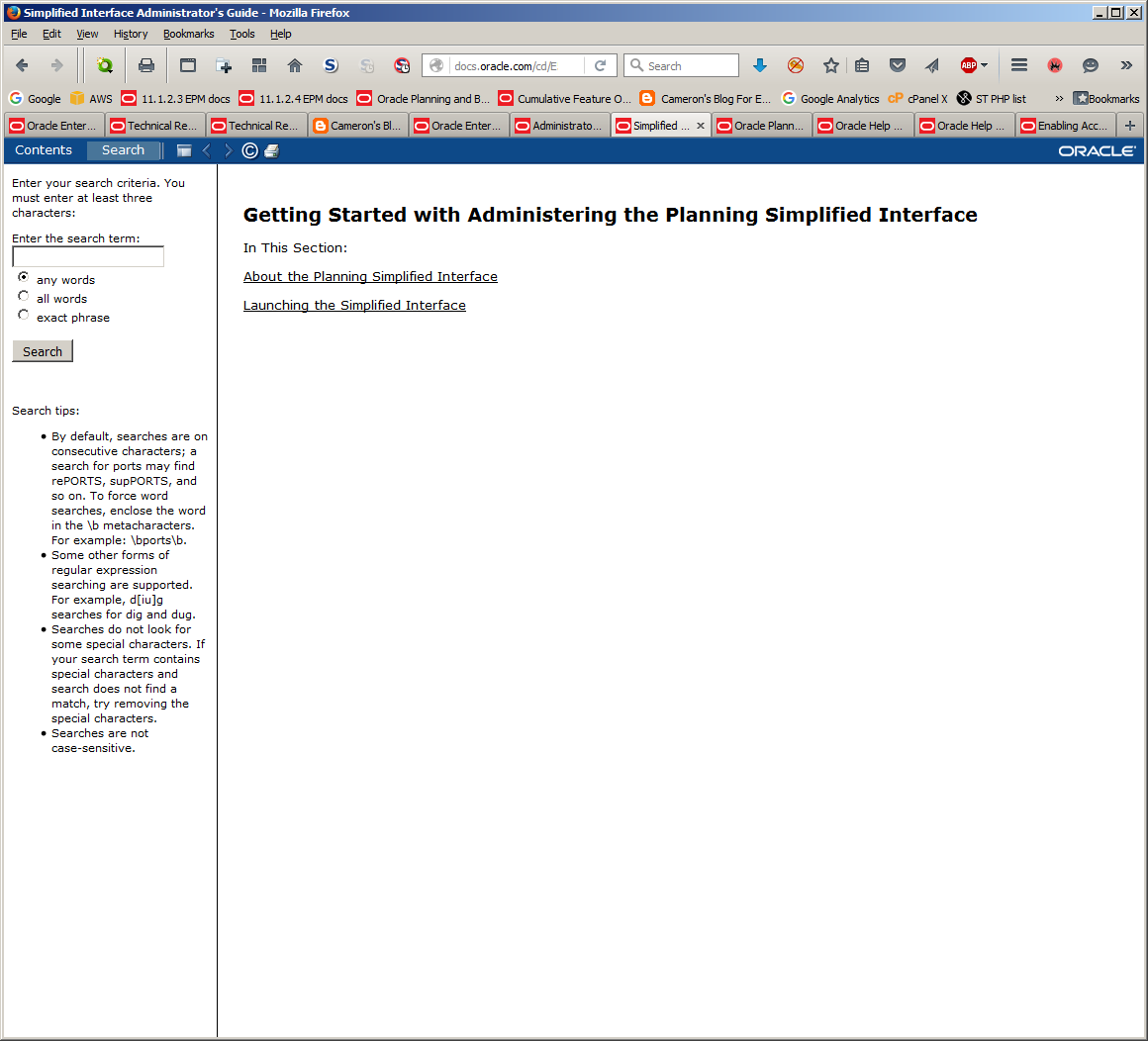 NB – I checked with Oracle and the below is NOT correct.  One day, maybe.  Unless I can’t read (eh, you see how I write so likely my reading is just as bad), there’s nothing that says it’s PBCS only but Oracle have stated that Sandboxing and Valid Intersections are PBCS only at this time.  Bummer.

Not terribly informative.  If you don’t click on contents, you’ll miss this little bombshell: 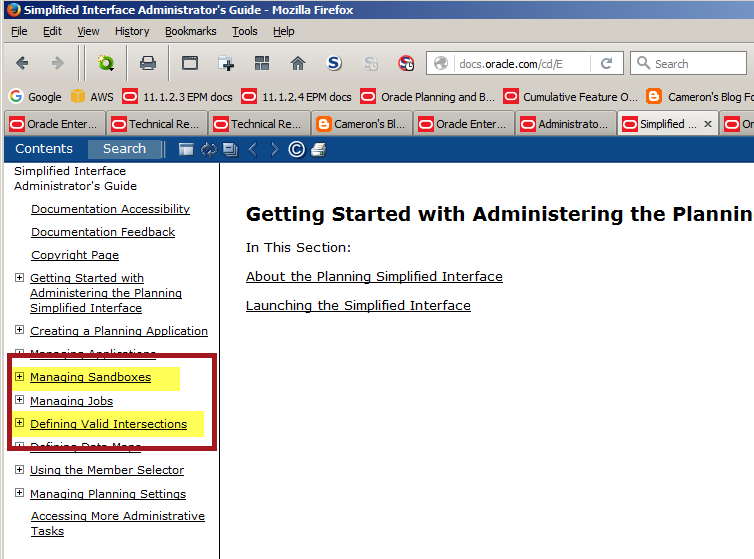 You are looking at sandboxing in on-premises Planning!  Talk about finding stuff out by reading the docs.  Who knew that was there? 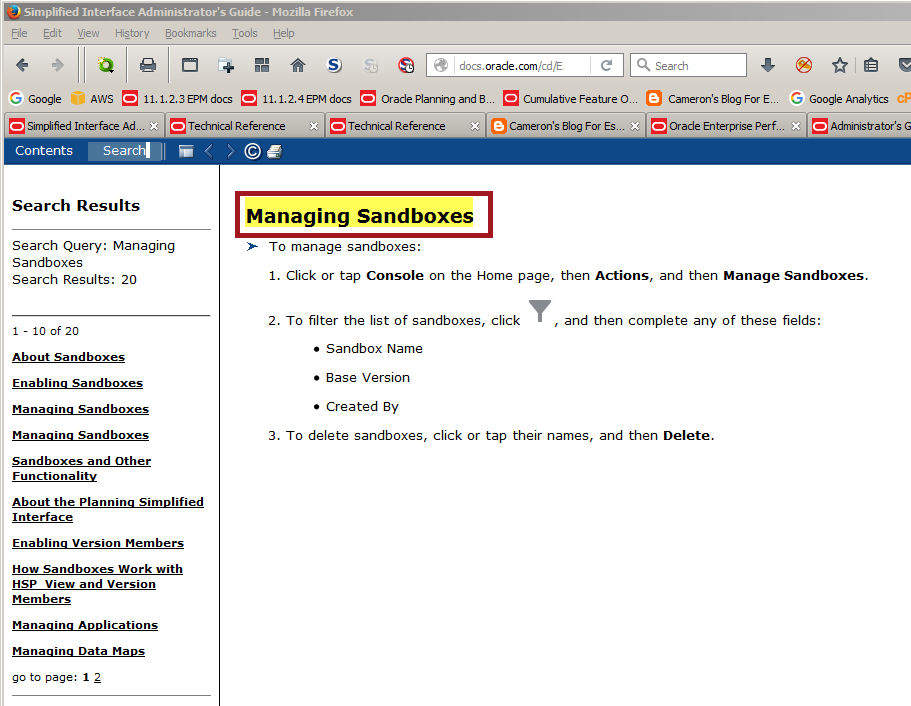 That was hard, too hard.  And I just found it through sheer luck.


Mistake or no mistake, contrast that with PBCS’ simplified interface docs: 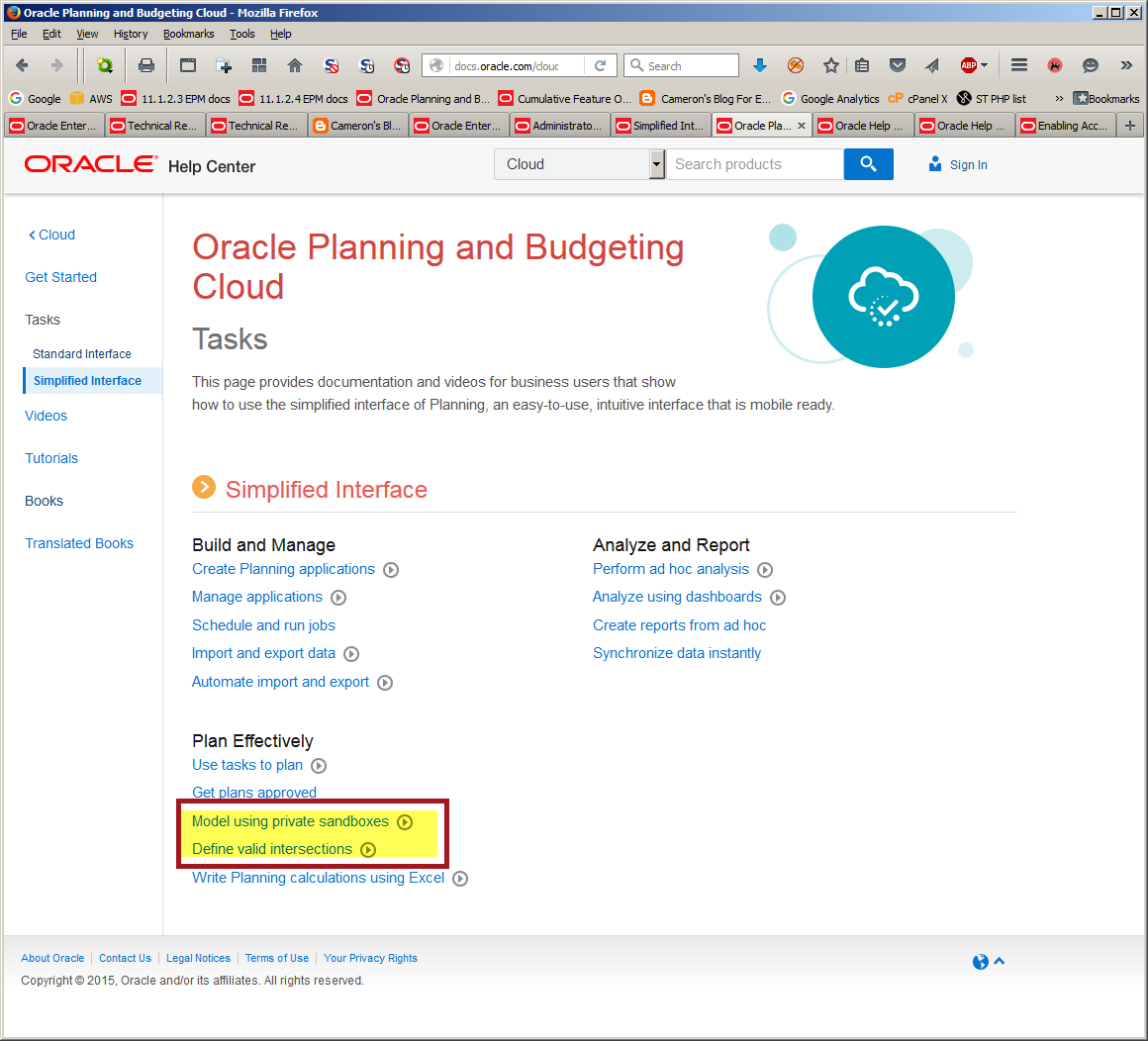 A bit easier to find, isn’t it? 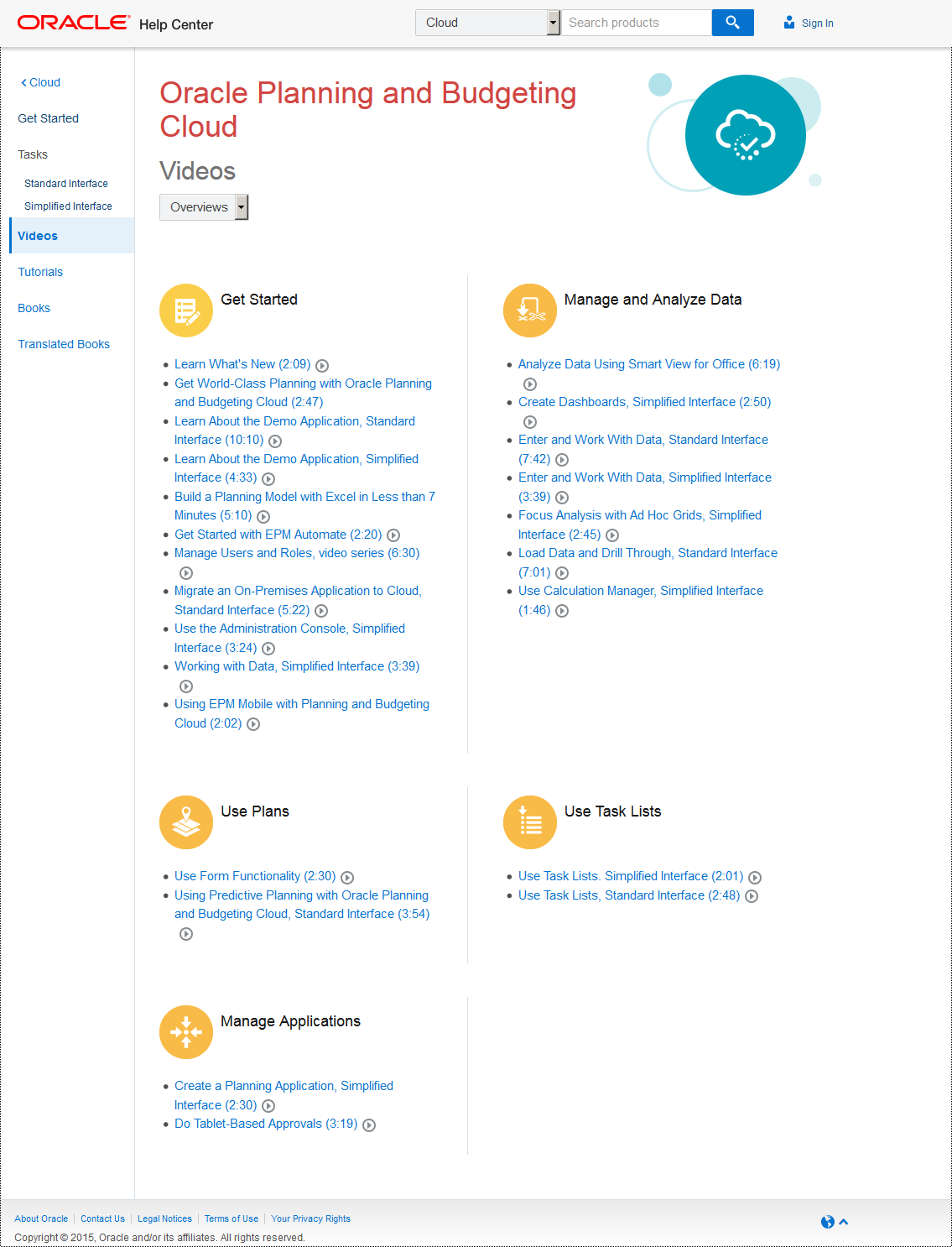 You can watch videos within the docs: 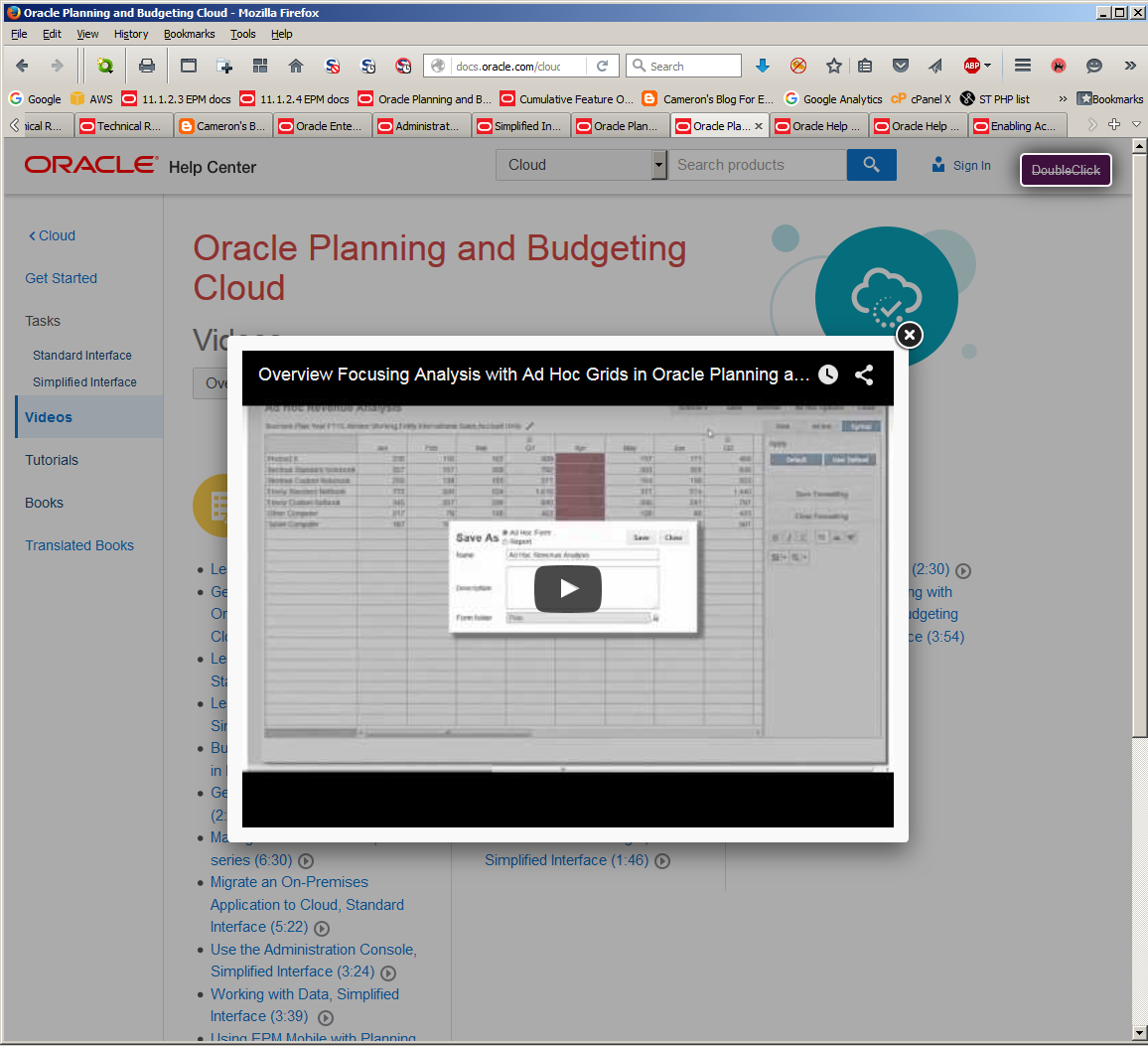 Or just directly in YouTube.  There’s an entire library of videos there but I’d avoid the temptation of looking at cat videos if you value your job. 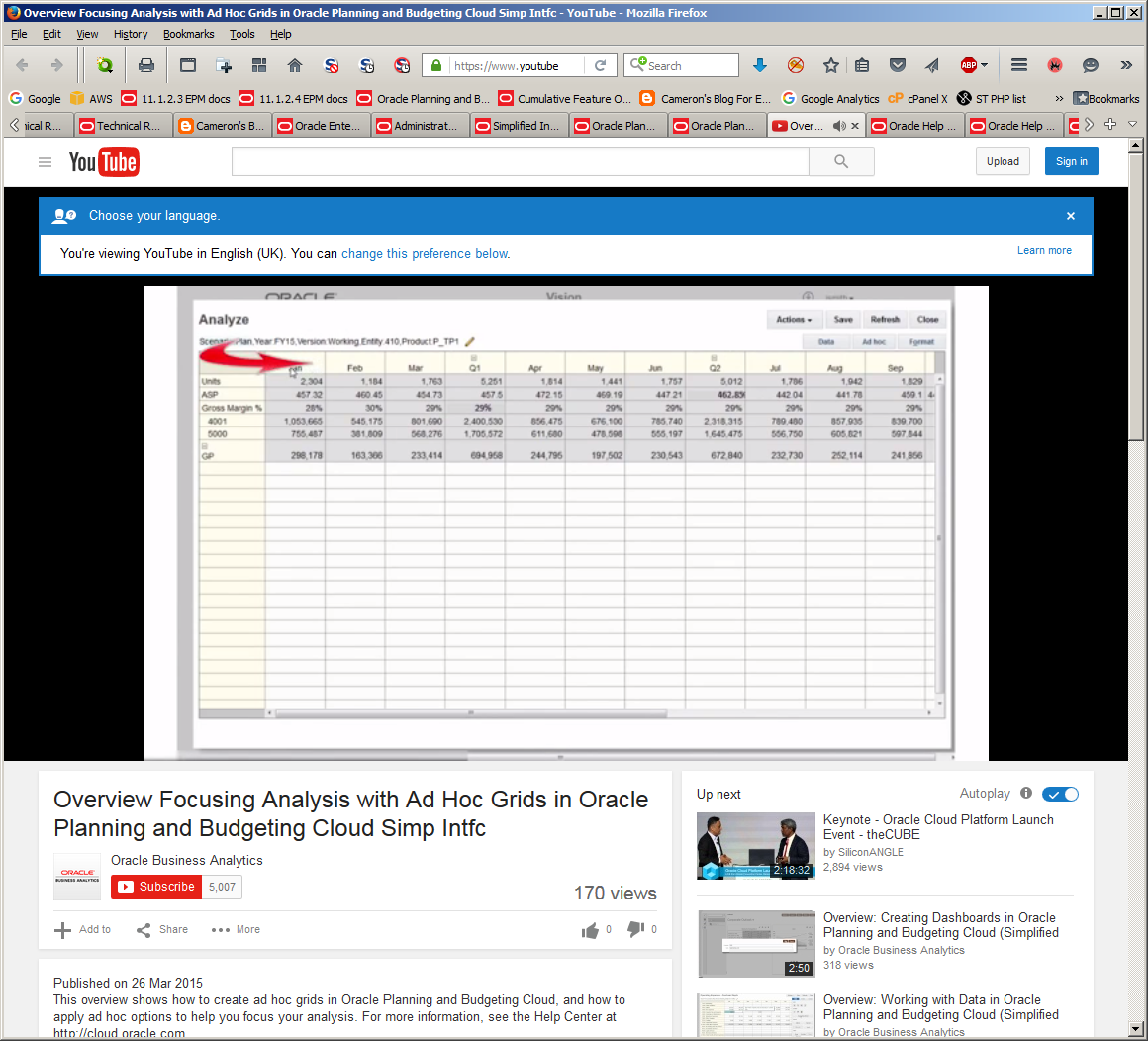 Teach me, teach me teacher

The other difference is the heavy tutorial orientation.  Want to create a Planning app?  Here it is, step by step: 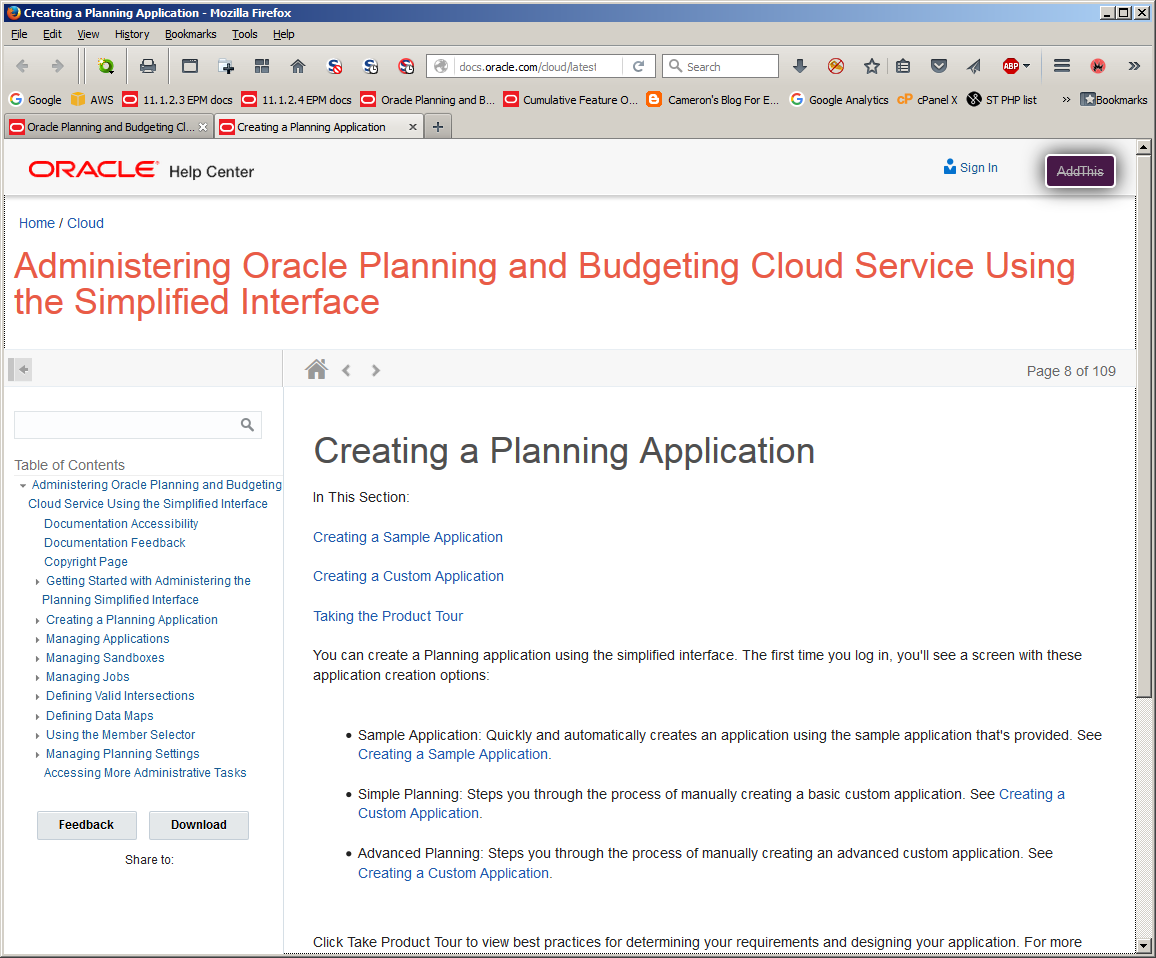 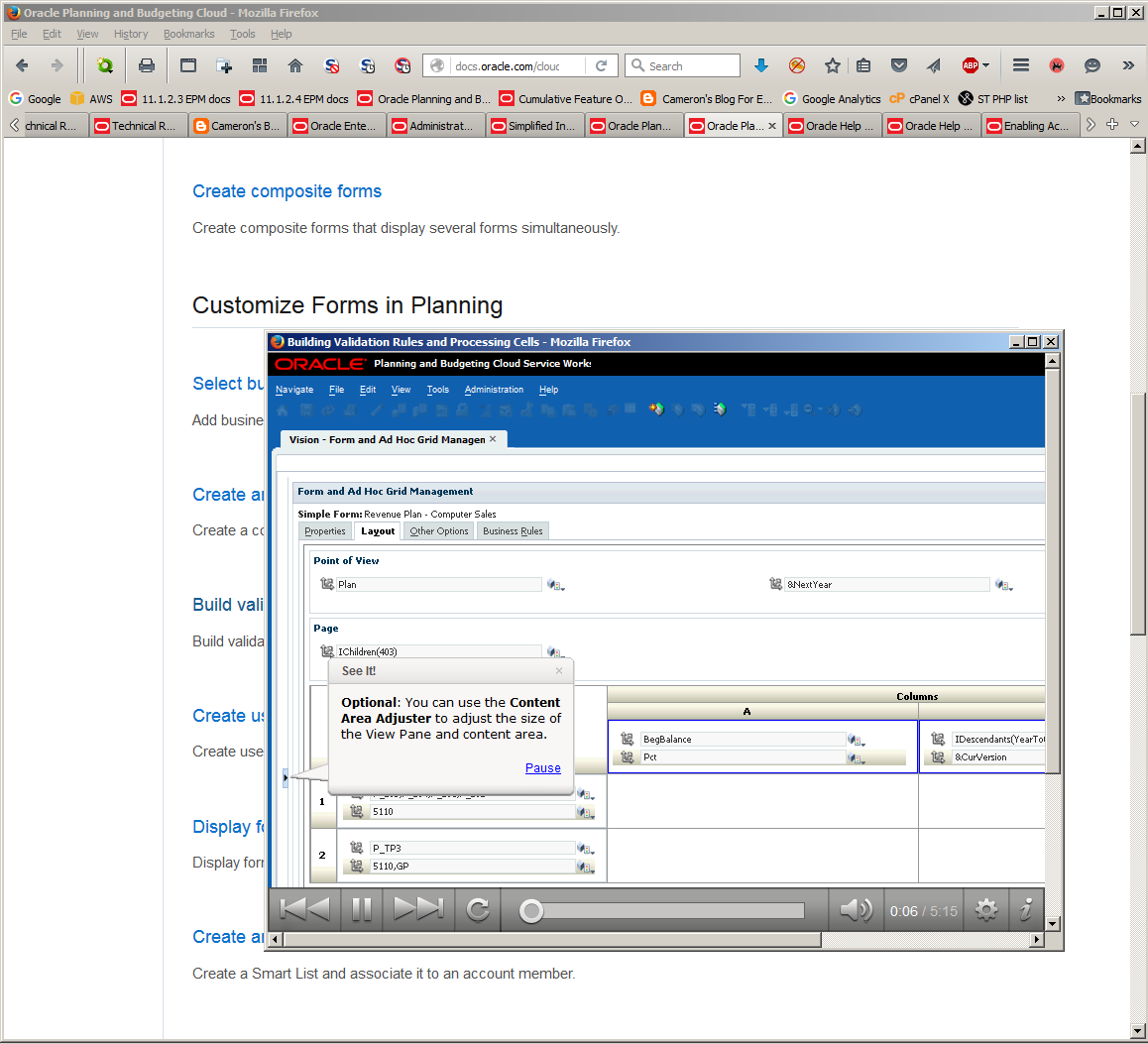 So what does this mean for on-premises?

The PBCS documentation is awesome.  Good grief.  All of it:  the task orientation, the ease of finding information, the videos, the tutorials, everything really is amazingly good.  Did I mention it is awesome?  It is.


And it isn’t there for on-premises Planning.


Having said that, there is nothing, absolutely nothing stopping you from jumping over to the PBCS documentation site and having a gander at the tasks.  Creating a form?  It’s there.  Task lists?  It’s there.  What’s stopping you from going there and stealing getting ideas for your custom training?  Or just learning how to do something?  Most but not all of the functionality is the same. 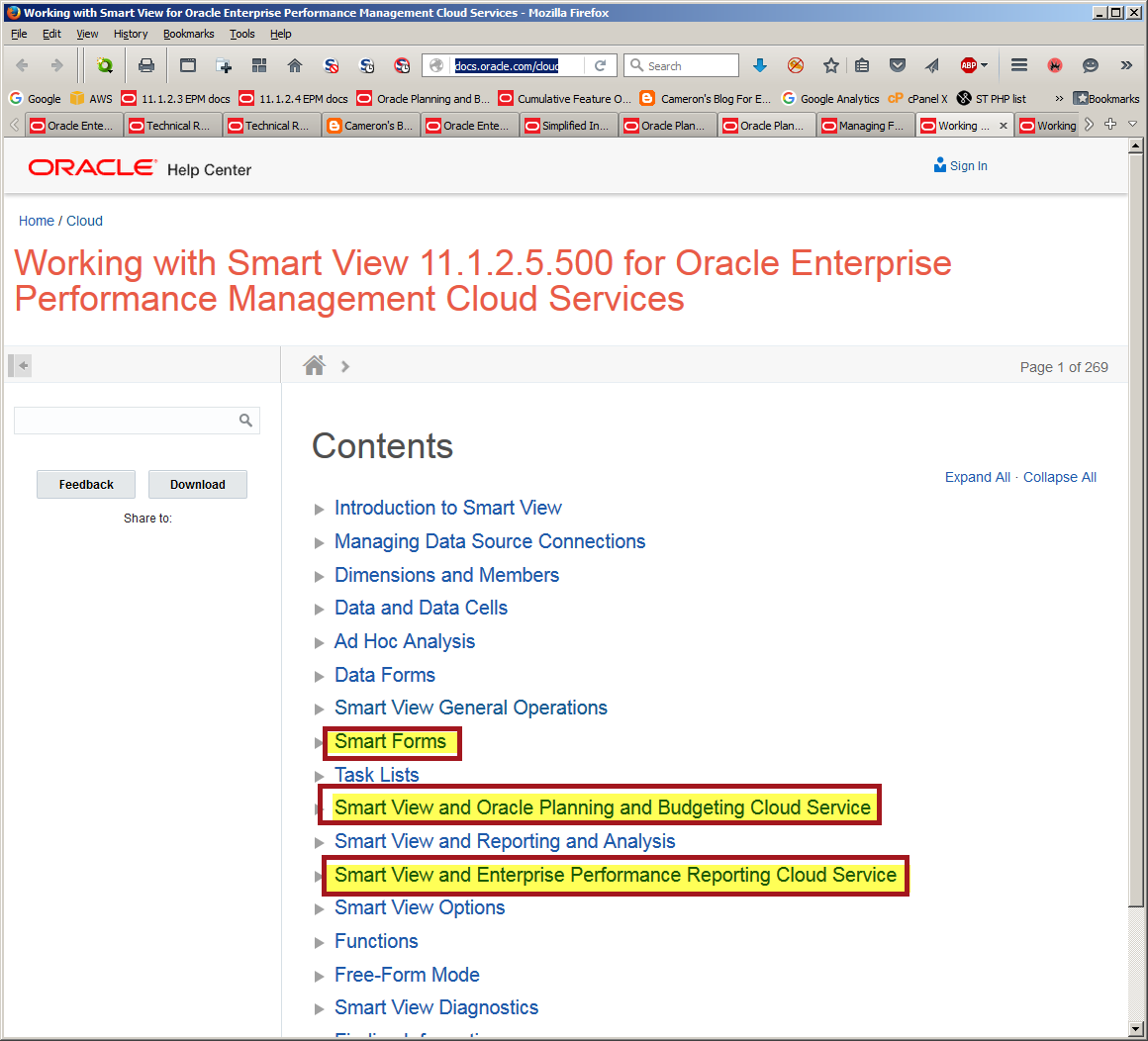 But they’re easy to see.  And avoid.

Where will Oracle go with this?

I don’t work for Oracle, a fact that the Oracle Corporation is undoubtedly profoundly grateful for, but I can take a couple of guesses as to why the documentation differs so and what will maybe happen in future.


The Cloud is a huge focus and emphasis at Oracle.  OOW was awash in Cloud and in our world, it was omnipresent with Essbase Cloud Service (EssCS) and just about everything else.  Where there’s an organizational push, there’s funding, and where there’s funding there’s product.  PBCS’ documentation Is part of that product.


What about on-premises?  A fantastic question because the current version doesn’t seem to have changed since approximately the Year Dot other than getting updated with new functionality.  My hope would be that Oracle copies the PBCS documentation (it is after all largely the same) and makes an on-premises version of it.  Or perhaps a more desirable approach is to take the PBCS documentation and somehow note that Smart Forms or whatever are PBCS only.  That latter approach would mean that as on-premises Planning picks up PBCS functionality that does-not-work-yet flag is removed.  Should the existing on-premises documentation remain as an alternate tool?  In an ideal world sure, but that would mean Oracle have to support two documentation lines.


The great news about this all is that PBCS has given the EPM team a chance to rethink and rewrite their documentation.  It’s really good.  And because so much of it is applicable to both on-premises, those of us not in the PBCS world can use much of it.  That is exactly what I’m going to do for both myself (I told you I actually RTM) and my customers.


But all of this post is one geek’s opinion.  What do you think?  What would you like to see?  Send me your thoughts, whether by email (the unlucky ones know it) or comments to this blog (you can hide behind anonymity if you wish) and I’ll pass it on to the Oracle documentation team.  They really do want to hear your opinion and it does drive their decision making.


Be seeing you.
Posted by Cameron Lackpour at 3:21 PM