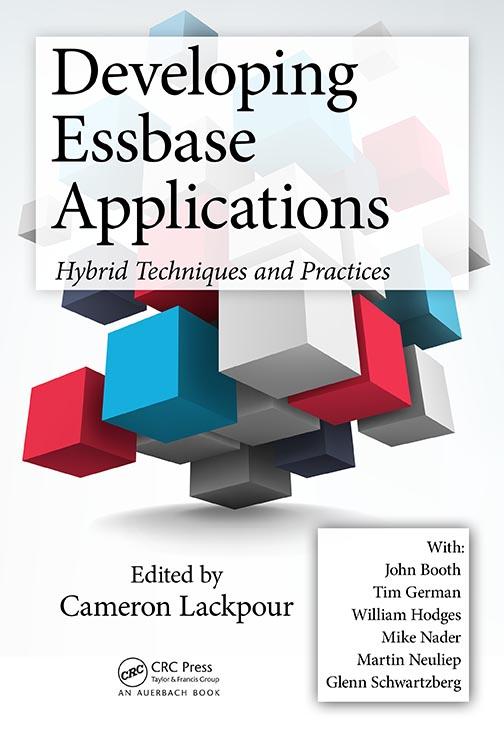 How can something be new and improved at the same time?  If it’s new, it isn’t improved – it’s brand new.  And if it’s improved, it’s just a modification of an existing thing.  It makes my somewhat-logical brain hurt when I try to wrap logic around language.  And yet, and yet, and yet…

Not improved, but vastly new

Developing Essbase Applications Hybrid Techniques and Practices  (there is no way I am ever going to remember the full name and besides I am a lazy typist so henceforth it shall be named DEA Hybrid) is not improved; it is brand spanking new.  Disregard the US Amazon description of it as a second edition – all of the content is new.

This book is new, new, new (is the message getting through?) and contains these chapters written by this august gaggle of geeks:

Did I mention this is all new content?  It is.

DEA Hybrid clocks in at 502 pages – 57 pages more than Developing Essbase Applications:  Advanced Techniques for Finance and IT Professionals.  I’m not sure you should judge a book by page count but it is indicative of an awful lot of effort, all of it good.

In the States?  You can buy it at Amazon or Barnes and Noble.

I am an internationally-minded geek (I have actually lived on three continents) and it’s currently available at Amazon Canada, UK, France, and Germany.  It is, oddly, not available on Amazon’s Australian, Italian, or Spanish sites.

When oh when oh when will you actually be able to hold it in your hands?

It should be available in the September to October timeframe.  There’s nothing on the US Amazon site but the European sites show the middle of October 2015.  Order today and get your copy as soon as possible.

A Kindle edition will be published.  Last time round, it lagged the print copy by a month or so.

An awful lot of Essbase awesomeness

Despite Yr. Obt. Svt.’s contributions, DEA Hybrid is written by some of the most talented thought leaders in our industry.  There’s no other way to access a collection of such diverse, advanced, and thoughtful content.

There’s nothing like this series of books out there and once you read DEA Hybrid I think you’ll agree.

Be seeing you.
Posted by Cameron Lackpour at 12:40 PM

Cameron great work ! Can i buy one with yours and others writers signature? It will make me happy )

My pre-order is in!

My pre-order is in!

Congrats! I look forward to reading it.

Thanks for your (meaning all of you) effort in creating this book. Actually the Kindle version is already available on Amazon (thanks to the overworked folks working for Amazon... most likely). I am looking forward to read it tonight.