As I wrote in my first post on this subject, after a bit of pain around figuring out how to read and understand the Shared Services schema, I can now run a query that will give me all the descendants of a given Shared Services group.  Huzzah for me!  Ahem.

But while that is nice (and the pat on the back I just gave myself felt oh so good), I want, no I need to know what the provisioning is for all of those descendants of a Shared Services group.

Nope, the subject is Essbase, not original sin, and you’re reading camerons-blog-for-essbase-hackers.com.  But I’m not taking back my desire to wring more out of Shared Services than I originally claimed I wanted.  As Gordon Gecko said, “Greed is good”.  Or maybe I should call this blog the outcome of Adam Smith’s Invisible Hand.  Although I am not totally clear on how I maximize my economic gains by writing this beast.

Back to a semblance of relevance – can I marry up the parent child list to directly assigned security?  Can I?  Hopefully, or I won’t have much of a blog post.

Given that Oracle EPM roles are defined in Shared Services, it doesn’t seem shocking that the table CSS_ROLES contains, well, the Oracle EPM roles.  But did you know there are 191 of them?

Here’s a simple query (it will become part of a Common Table Expression a bit later on) that combines CSS_ROLE with CSS_ROLE_LOCALES (which stores localized by language role names and description).

--    Figure out all of the possible roles in each project

By the way, if you wonder how I came up with that WHERE statement I am not ashamed to say that I used SQL Server’s Profiler to watch (aka, steal) SQL code as it came out of Shared Services. 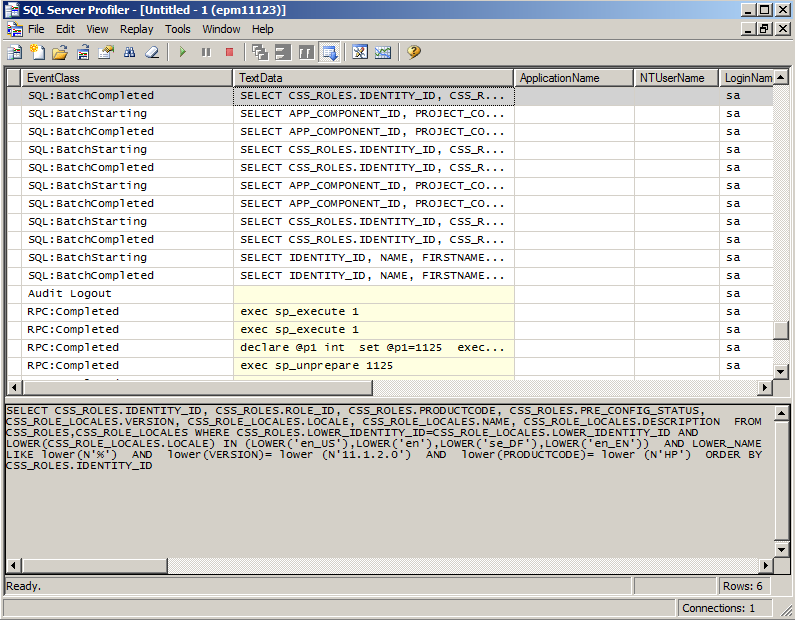 I can almost hear you say, “Wait a minute.  Are you saying that you set up SQL Server Profiler on your VM and then just regurgitate the queries back to us, while claiming that you wrote it all yourself?”  I so wish that were the case as the time it would take to write these posts would be quite a bit quicker.  Alas, no.

The query you see above is the only bit of code (okay, there is one more snippet) I was able to “borrow” from Oracle.  What does Shared Services (and all of the other Oracle EPM tools – trust me, I’ve looked) do?  Take a look at the lines that say “exec sp_execute 1” and “declare @p1 int set…”.  I am here to tell you some of what the products do are “normal” queries and much of the rest is done within the application, including the population of those stored procedures which btw destroy themselves on execution.  This overall query, other than this one bit (again, with one other qualification) is, for better or worse, 100% Cameron.  Probably worse, but I will persevere on.

But looking at SQL Server Profiler showed me something else:  use of a view called VW_APPLICATIONS.  A quick perusal of the Shared Services schema guide shows exactly no mention of that view.  What oh what oh what could that view provide?

Go take a look at the view if you wish.  Wait, this is the second code bit that is Not By Cameron, but again, I am pointing this out, so it isn’t exactly subterfuge or fraud on my part. 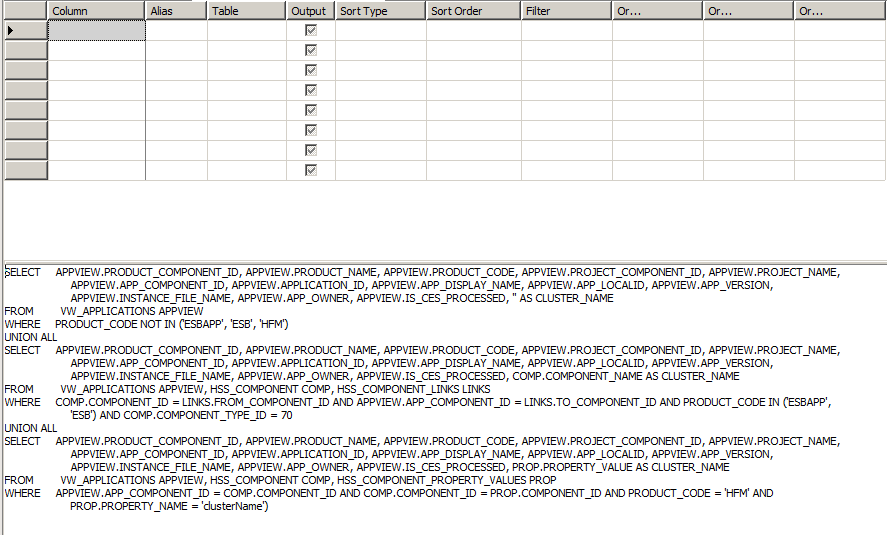 NB – If you stick the above code into a query, make sure you remove the last parentheses. 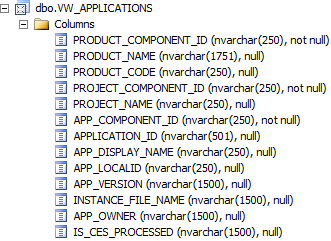 Oooh, isn’t that pretty?  We have nothing less than a nice view of all of the applications in pretty almost-English.  Click here to embiggen the picture to see all of the apps on my VM.

Before I confuse myself with higher mathematics, it’s really quite simple.

Put them all together and the answer isn’t really 5 but a direct (as in what is directly provisioned to the inclusive descendants of a Shared Services group) report on group hierarchy and the security assigned at each level.

And here’s the Planning-related group PLN_SampApp1.  And yes, I really did assign Calculation Manager rights to a lower level group just to see what the query did with it.

No, I am not talking about belly buttons but instead the somewhat unusual use of LEFT OUTER JOINS at the end of the DirectSecurity CTE.  These are necessary because the users (you are looking at a proper hierarchical security model after all) have no security.  Trying to INNER JOIN these users across provisioning, applications, and roles would result in them being dropped.  Instead, LEFT OUTER JOINs are used to include them in the output.  Go on, play with the code and you’ll see what I mean.

While it’s nice to have a report that shows the hierarchical relationship between groups, sub-groups, and users along with their security, this is a top down report.

What about a query that gives me all of users in the application, their implicit and explicit security, and the hierarchical group lineage so you can see how that provisioning gets assigned?  Yes, that is available on a user by user basis in Shared Services but not as a group report.  Now I just have to finish that bit of code…

Be seeing you.
Posted by Cameron Lackpour at 6:34 PM

Which role need to give to access "View Provisioning Report" for a read only user? Please help. Thanks

I have the same query to follow up:
Which role need to give to access "View Provisioning Report" for a read only user?